Coinbase’s reference price for its direct listing is $250, the valuation of $66.5 billion

Goldman Sachs and Nasdaq have decided Coinbase stock should start trading at $250 per share, which would value the company around $66.5 billion on a fully diluted basis, assuming an estimated 266.2 million shares outstanding. 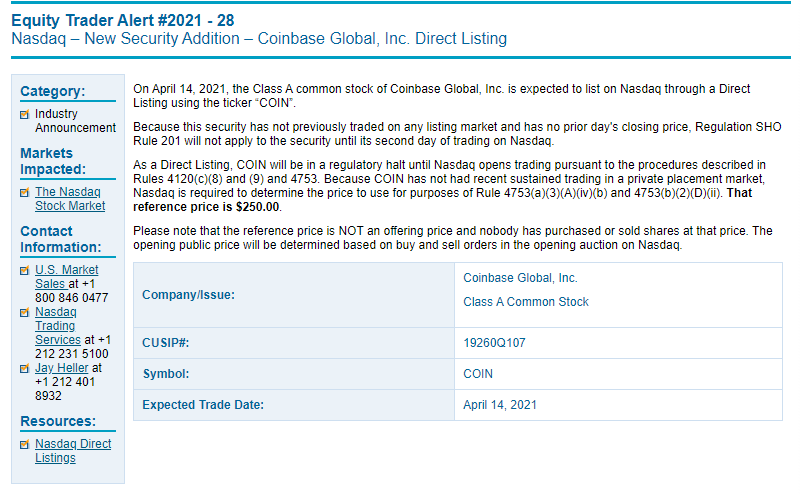 The reference price reflects past transactions and input from the investment bankers. It is discovered using public financial information along with market sentiment and is usually a conservative estimate. This figure came is 27% lower than what Coinbase last traded at in the private secondary market, $343.58 per share.

Coinbase is set to become the first major crypto business to go public in the U.S. and, should it reach a $100 billion market cap, will instantly be one of the country’s 85 most valuable companies. The company’s value has soared in the past year alongside bitcoin and ethereum, the primary currencies traded on the site.

Coinbase exchange released its first-quarter results last week, Coinbase’s user base increased by a staggering 117% from 2.8 million in Q4 2020 to 6.1 million in Q1 2021 quarter. As a result, the exchange’s revenue ballooned to $1.8 billion over the three-month period ending March 31, netting a profit of roughly $740 million to $800 million.

Additionally, Coinbase’s total assets surged from $90 billion to $223 billion during a single quarter; $122 billion of those assets originated from institutional investors.

Bitcoin price attained a fresh record today, breaking through $63,991 and then managing to retain most of their latest gains

Thailand will use “Dip-chip’ machine for…

Fidelity is delving deeper into the digital asset space…

Digital Currency Group and Coinbase are named in the…