Chandler Guo, a pioneer in the cryptocurrency field, has made a sagacious judgment about the development of the new era. In it, he said that a new force is emerging, which is the payment system established by the Chinese state called “Digital Currency Electronic Payment (DCEP). 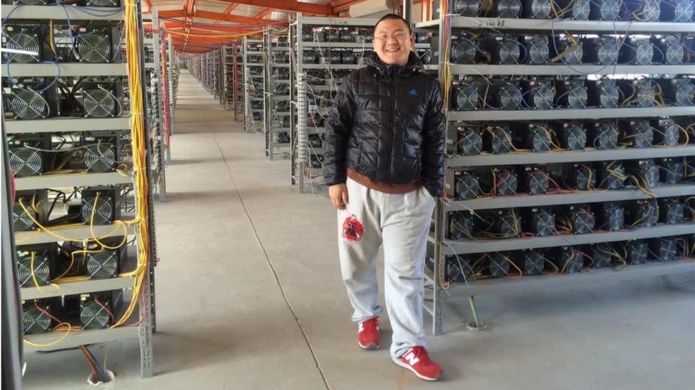 Chandler Guo at one of his cryptocurrency mines

Everyone will be using DCEP soon!

In 2014, Guo founded a mining pool specializing in Bitcoin mining in western China. At his peak, his pool could mine up to 30% of the world’s Bitcoin. He believes that one day Bitcoin will change the world and replace the dollar.

However, “high mountains have higher mountains” Guo realizes that a new force is emerging, expected to be even stronger than Bitcoin that is the payment system formed by the Chinese state called “Payment System. Digital Currency Electronic Payment – DC / EP. This is actually a digital version of China’s official currency, the renminbi, and Guo feels DCEP will become the dominant global currency.

But, the theory is, and the reality is entirely different. Many people began to question whether it would work, and there are even concerns that the Beijing government will use DCEP to spy on citizens.

Like Bitcoin, DCEP uses Blockchain technology to verify transactions. In fact, users don’t need a bank to transact currency. If they want to pay each other, they easily manipulate everything over the phone.

China also plans to launch DCEP later this year. But so far, the People’s Bank of China has not proposed a specific timeframe.

Observers believe that China wants to internationalize the yuan so that it can compete with the dollar.

“The Chinese government believes that if some other countries can also use the Chinese currency, that could disrupt the monetary sovereignty of the United States. The United States has built up the existing global financial system. and related tools. ”

While Facebook has narrowed its plans for the Libra stablecoin, that remains a concern for China. The social media giant plans to launch a digital wallet called Novi later this year. It will work as a standalone app but might also be available on Messenger and WhatsApp.

Linghao Bao, an analyst from Trivium in Beijing, said:

“The two sides are definitely engaged in a financial war, although no major confrontation has yet occurred.”

China’s digital payment system is considered to be one of the most advanced in the world. This country is on track to become a cashless society. In 2019, four out of every five payments in China are made through Tencent’s WeChat Pay or Alibaba’s Alipay.

“The US is the leader in the global financial system. But they don’t have the same incentive as China to make changes to digital money. China wants to share that power. But for America, Libra is just that.” In poor countries and also in China, many people are living in villages that have a lot of limitations. They have very little money, but they still use a smartphone. If you can buy a smartphone, you can use DCEP. ”

However, DCEP will be centralized and governed by the state, unlike Bitcoin or Ethereum, that are not controlled by the government.

Many Bitcoin enthusiasts fear that the Chinese Communist Party will use DCEP as a tool to control citizens more. Furthermore, the authorities will be able to monitor how money is spent in real-time. They will also have the same control of DCEP as they would with the yuan.

Beijing tightly controls the yuan, and its exchange rate has caused many tensions between the US and China. The US accuses China of keeping the yuan weak to benefit its economy.

According to Stewart Mackenzie, a cryptocurrency expert in Hong Kong:

“DCEP is the antithesis of Bitcoin. The ultimate goal of cryptocurrencies is to separate money from their states. It’s easy for them to say it’s like Bitcoin.”

“DCEP is built on an idea of centralized control. The value of Bitcoin lies in its decentralization nature and its isolation from the financial system. I trust Bitcoin more. Because it belongs to me.”

The subreddits for Dogecoin and CryptoCurrency added a…

The subreddits for Dogecoin and CryptoCurrency added a combined 232,697 subscribers last week

The subreddits for Dogecoin and CryptoCurrency added a combined 232,697 subscribers last week

Dogecoin's strong increase in price over the past few days has surprised the cryptocurrency market. In particular,…
Loading ... Load More Posts No More Posts