According to the upcoming book The Room Where it Happened by John Bolton, he revealed that President Trump had had a dislike for Bitcoin since at least May 2018, when the President punished Treasury Secretary Steven Mnuchin approached Chinese trade negotiations. However, knowing that China controls Bitcoin, the Trump administration has backed Bitcoin and Ethereum at the cost of US-made cryptocurrencies. This happened even as China tightened its hold on Bitcoin and Ether.

President Trump has a distaste for Bitcoin

As relayed by the Washington Examiner, Bolton took notes as this scene unwound:

“Don’t be a trade negotiator,” Trump allegedly said … “Go after bitcoin [for fraud].”

Moreover, on June 14, 2018, when the SEC’s Director of the Division of Corporation Finance Bill Hinman announced a surprising new policy toward the two crypto securities at a Yahoo! Finance conference in San Francisco.

“As with Bitcoin, applying the disclosure regime of the federal securities laws to current transactions in Ether would seem to add little value. They might have been securities at the start, but had eventually achieved decentralization from any one enterprise.”

The SEC followed with more institutionalized support for Bitcoin and Ethereum on November 16, 2018, with “A Statement on Digital Asset Securities Issuance and Trading”. This has the effect of enticing the cryptocurrency community into three groups: The bad guys in the penalty box; The good guys (Bitcoin and Ethereum) free to go; Everybody else in limbo.

Recognizing this situation, China has doubled its efforts in cryptocurrency development by supporting Bitcoin and Ether mining. According to a report from CoinShares, cryptocurrency mining activities have grown quite strongly in China.

While the Chinese government is giving mixed signals about blockchain support, they have silently allowed mining companies to access some of the cheapest powers in the world to mine Bitcoin and Ether. And the result is as much as 65% of Bitcoin hash power resides within China. And the highest we’ve seen since we began our network monitoring in late 2017. 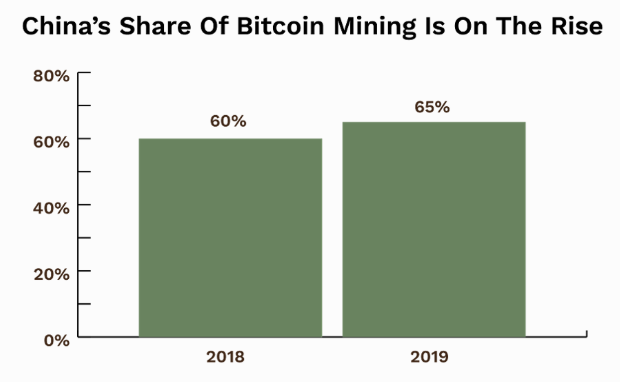 The majority of them are in Sichuan province, with 90,000 MW of hydroelectricity. Sichuan region alone generated 54% of the global hashrate in 2014, with the remaining 11% equally or less divided between Yunnan, Xinjiang, and Inner Mongolia.

At the same time, Chinese computer makers are said to be providing the best new chips and hardware to these mining companies. CoinShares also found that Beijing-based computer maker Bitmain controlled 66% of the global cryptocurrency mining business, including high-powered machines introduced in 2018 exclusively for Ether mining.

To be sure, the location of Ethereum’s hashrate is not carefully researched. Still, the mining focus of the online mining team shows that Ether is also dominated by Chinese mining companies.

And of course, the risk lies in the fact that China will likely control 51% of the Bitcoin or Ethereum network hashrate. Controlling Bitcoin will give China additional leverage in the global capital market. The ultimate goal is to dominate everything.

The article is referenced from CNBC.