Changpeng Zhao decided that the SUSHI list was just because of the traffic, the community was filled with outrage

CZ has warned on the future of DeFi, utilize it to a bubble

The chief executive officer of one of the biggest platforms in the industry Binance, CZ, recently took to Twitter to give his opinions on the industry of DeFi. In his eyes, this industry is brewing a storm that he has compared to a bubble.

Throughout 2020 alone, these kinds of tokens have outperformed and are the unlikely success heroes in the crypto industry as they have spiked to significant highs. As the value goes up, understandably, so invests interest. Many applications within this industry are currently all the rage. Still, the CEO of the platform believes that people should be wary about the future of these tokens and asset classes. He believes that these kinds of tokens that have no inherent value could have a significant impact on the value of the market for many participants shortly.

There are many people all over the industry who are excited about the future of this asset class and its impact on the blockchain/crypto space.

Giving his unpopular opinion, CZ said the following on Twitter:

Expecting all kind of backlashes, which I will calmly ignore.🙈

All of this is quite interesting when you consider that Binance itself has embraced these kinds of tokens regardless of its CEO’s opinions. With a significant increase in demand over 2020, the exchange has teamed up with many industry players to launch this staking on its platform.

CZ’s move was controversial when decided to list SUSHI

Meanwhile, the CEO of Binance previously stated that Binance has a strict standard for listing coins on the exchange. Therefore, the currency listed on the exchange can be considered as a quality and reliable enough.

Even if it discovers something related to the team, the project’s development roadmap, scandal, … CZ is continuously afraid to delist those coins. Yet now he just did a puzzling act: Declare the SUSHI list just because the traffic to it was so high. And if they don’t list it, Binance will become obsolete.

This move by CZ has filled the community with outrage. Binance users have to question the CEO of Binance because they probably decided to list a coin without meeting the dev/CEO or any form of governance first. Even Binance added leverage trading on top of SUSHI.

It seems that the listing standards stated by Binance are just a joke. In this regard, Binance is entirely inferior to Coinbase. Binance willingly adds blatant scam tokens for your exchange not to become obsolete. This seems like a good business model and strategy. But perhaps it didn’t satisfy the user experience!

Moreover, people resent Binance’s move because CZ frankly shared that he did not know who the founder of SUSHI was, simply that the exchange did not want to lose users to other exchanges, nor did he. We care about price; we care about liquidity. 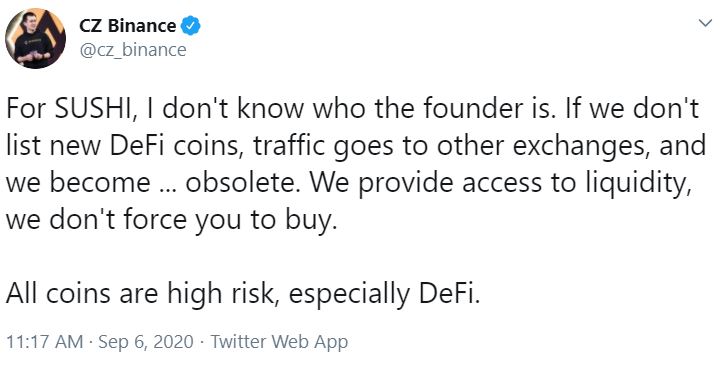 And even more infuriating is that the founder of SushiSwap, Chef Nomi, sold all of his SUSHI tokens to ETH for nearly 200,000 ETH yesterday, causing SUSHI to drop 74% in 24 hours.

People asked if I exited scam. I did not. I am still here. I will continue to participate in the discussion. I will help with the technical part. I will help ensure we have a successful migration.@SatoshiLite did that and Litecoin had no problem surviving.

The fact that he wanted to focus on his work and not be affected by the price, to be more decentralized, he sold out his tokens, the same way Charlie Lee did with Litecoin in 2017 when the LTC price peaked.

The fact that Chef Nomi did so, and CZ still list SUSHI proves that Binance is not what they said! They don’t care about the user experience at all and are not a coin list standard. Or rather, Binance focuses only on money and trends!

Ethereum price down 15% in the past 24 hours, actually making it one of the worst-performing cryptocurrencies in the top 20