Recently, the oracle Chainlink network has continuously been attacked by hackers and spam. This has caused network congestion, preventing nodes from providing data to Blockchain application developers.

The hacker spam attack caused the congestion of the Chainlink network

“We have succeeded in overcoming the first large-scale spam effort on the chain. The network can continue to function normally and within expected parameters.” 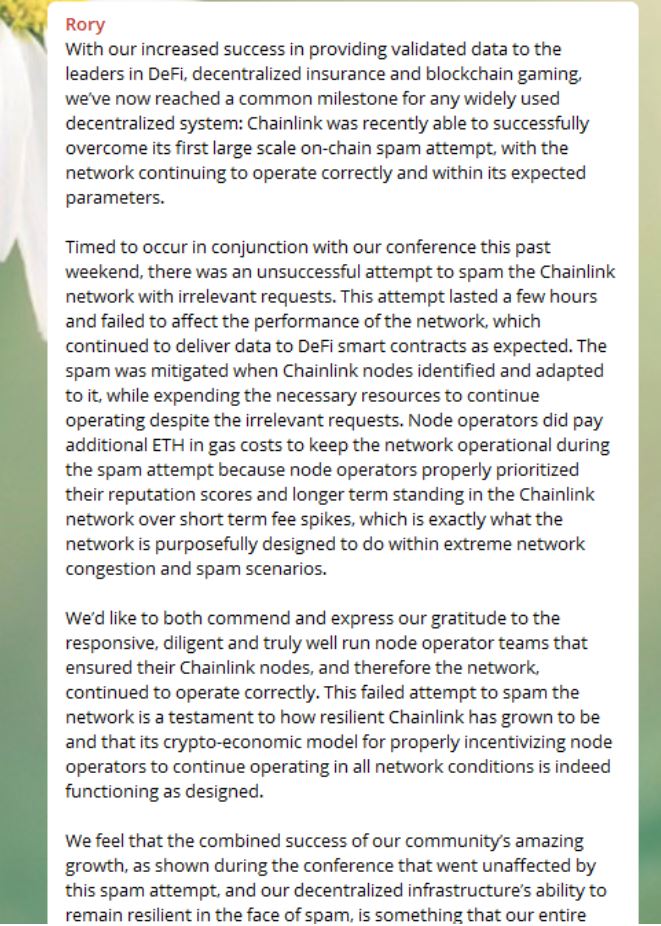 During the crash, the attacker attempted to spam Chainlink with excessive requests. Piant said the attack lasted for a few hours but had no impact on network performance.

Chainlink nodes had to pay a higher ETH fee (or gas fee) to stay active in the attack. According to Piant, node operators are willing to pay those costs to maintain their reputation over the long term, despite the costs being considerably higher in the short term.

Although many node operators are willing to pay higher fees to keep Chainlink going, however, it seems that the solution to the spam attack is more complicated than Piant suggested. Also in it, there are many suggestions that Chainlink and the node operators have included certain data requests whitepaper to handle a large number of requests. This means that only a few highly configurable applications can request data during the attack.

Chainlink also refunds some node operators who are forced to spend too many fees. Specifically, node operators lost a total of more than 700 ETH ($ 335,000) due to higher gas fees. It is known that Chainlink has compensated node operators directly through autoloading scripts and newly issued grants.

Due to these capabilities, it is not entirely clear whether Chainlink primarily solves a spam attack automatically through its billing model or by meeting the needs of the network in real-time.

LINK pricing has an impact, but not too much

This attack was happening so quickly that it did not attract much attention from the community. So, fortunately, it does not have a significant effect on market prices. LINK prices have fallen 14.4% over the past week compared with a 7.2% decline in Bitcoin over the same period. Of course, this drop has little to do with the previous attack.

That said, LINK has been performing exceptionally well in recent months. LINK prices have increased by 570% in the past year. Even though LINK has declined since hitting an all-time high in August, it remains one of the top five cryptocurrencies by market cap.

The reason for Chainlink’s above-average performance isn’t entirely apparent. But partnerships, application, and general market performance can all be behind the coin’s popularity.

The support between $0.22 and $0.24 is quite significant and may allow XRP price to rally higher in the days and weeks ahead

Theta Network has been collaborating with Chainlink to…

Chainlink price intense rebound up to 22% from daily…

Chainlink price could invalidate its macro uptrend if…