Despite showing signs of weakness in the short term, Chainlink is still within substantial growth territory in the mid-term time frame, as it has now grown from a 30-day low of $ 4.40 to be set at the end of June. However, analysts are currently warning of being overly excited about the short-term prospects of cryptocurrencies, because many people note that it may take quite a bit of time before LINK has been able to set new all-time highs.

The critical level the bulls need to overcome if they want to beat significant support is $ 8, but the selling pressure here has proven to be quite substantial. At press time, Chainlink is trading more than 3% off at its current price of $ 7.65. This is around the price at which it has been trading during the past day.

Earlier yesterday, buyers tried to push LINK above $ 8.00, but the selling pressure here was quite significant and prevented the cryptocurrency from growing further. Now it seems that LINK may be in a precarious position because analysts note that it may need to drop significantly further before finding any substantial support.

While talking about the recent denial of cryptocurrencies, the trader Calmly explained that it would drop somewhere between $ 7.16 and $ 7.36 before finding any support. Significant support.

“LINK – Disappointing that this lvl didn’t hold. Now, I have to the see next lvl hold or I don’t like LINK for the long side anymore.”

#Chainlink / $LINK – Disappointing that this lvl didn’t hold. Now, I have to the see next lvl hold or I don’t like $LINK for the long side anymore pic.twitter.com/K58UVpMDXd

Earlier this month, Chainlink was able to set an all-time high at $ 8.60. The increase here is quite intense, though it eventually proved to be unsustainable.

For it to begin rallying towards these highs, analyst Teddy believes that cryptocurrency needs to surpass $ 8.00. He noted that not doing so could lead to further disadvantages.

“No moon till $ 8 is reclaimed – now previous support is resistance.” 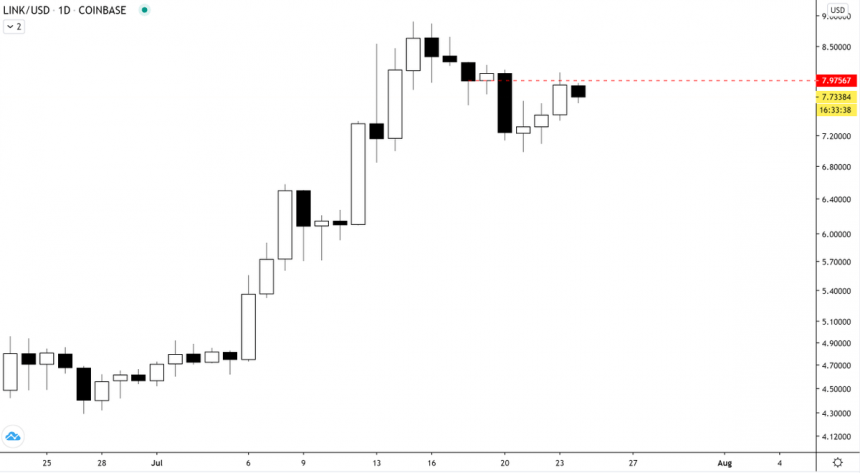 Because Chainlink’s macro trends remain firmly in growth territory, it’s too early to say for sure that the uptrend of the cryptocurrency is anywhere near the end.

Bitcoin price stands to rally even further should it retest and surmount $9,700 in the near future

A move by U.S. banks to hedge and invest in Bitcoin price even with 1% of their assets, could send this market skyrocketing