Chainlink price has been stuck in a period of consolidation spanning the past few weeks when LINK was mostly trading between $ 12.00 and $ 12.70. At press time, Chainlink is trading at around $ 12.75, up nearly 3% over the past 24 hours.

This consolidation did not provide much insight into its short-term outlook, as the bulls are still reeling from the damage caused to its market structure after being rejected by $ 20.00. Analysts are currently noting that its next trend is likely to depend largely on its eventual response to the critical resistance level its price is fast approaching.

The Chainlink price consolidates when the cryptocurrency market demonstrates the strength

At the time of writing, Chainlink is trading around its current price of $ 12.75. This is the price around the one it has been trading for the past few days and weeks, with it struggling to break out into the $ 13.00 area.

The recent trading range between $ 12.00 and $ 13.00 that it was first caught in was formed earlier this week as LINK rallied to a high of $ 13.20 before facing a move up decline quickly.

While Chainlink remains below its recent highs, BTC and ETH are both in the process of testing their respective resistance levels. ETH was even able to break past $ 380 as its bulls showed considerable strength.

While talking about Chainlink’s current technical outlook, Cactus analyst says he is watching for some signs of weakness.

He notes that this weakness can be invalidated with a substantial break above $ 13,200:

“LINK / USD: Honestly not looking too great right now, currently not looking like the best time to take a long position at resistance, but if PA can flip $13.2, I would belong… Maybe I should listen to the marines and degen long?” 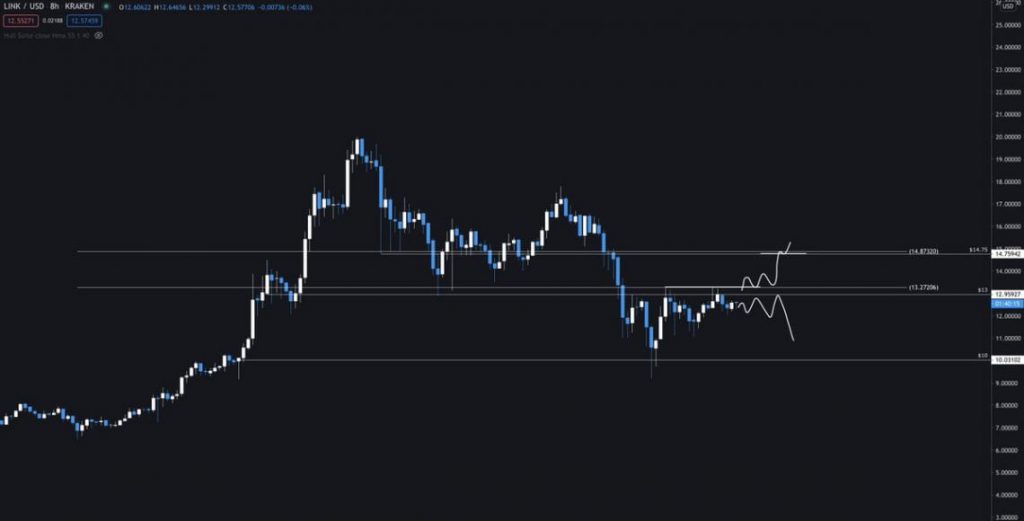 What Chainlink trends look like over the next few days and weeks may depend at least in part on whether Bitcoin and Ethereum can maintain their current strength.

Bitcoin price will move towards $11,200 to $11,500 soon cause BTC formed an bullish pattern ascending triangle

Theta Network has been collaborating with Chainlink to…

Chainlink price intense rebound up to 22% from daily…

Chainlink price could invalidate its macro uptrend if…

The excitement for the DeFi space never stops. Eminence, an unfinished "economy for a gaming multiverse" being…
Loading ... Load More Posts No More Posts