The fact that Cardano is among the minor lucrative investments in the cryptocurrency market is not a secret. Although some investors favor the project’s basic worth above its performance among traders, it is not an issue; nonetheless, the undervaluation of ADA might change the situation shortly.

Cardano (ADA) Is Extremely Undervalued According to On-chain Data

The MVRV-Z score indicates that Cardano is the most undervalued it has been in the last 45 months and is currently at the lowest relative position compared to its realized value since 2019. The indicator calculates an asset’s value based on typical trader losses.

“Cardano now sits at its lowest relative position compared to its realized value since Jan, 2019. This is a sign of undervaluation based on average trader losses. ADA’s price doubled the following 3 months the last time its MVRV Z-Score hit this level”, Santiment reported. 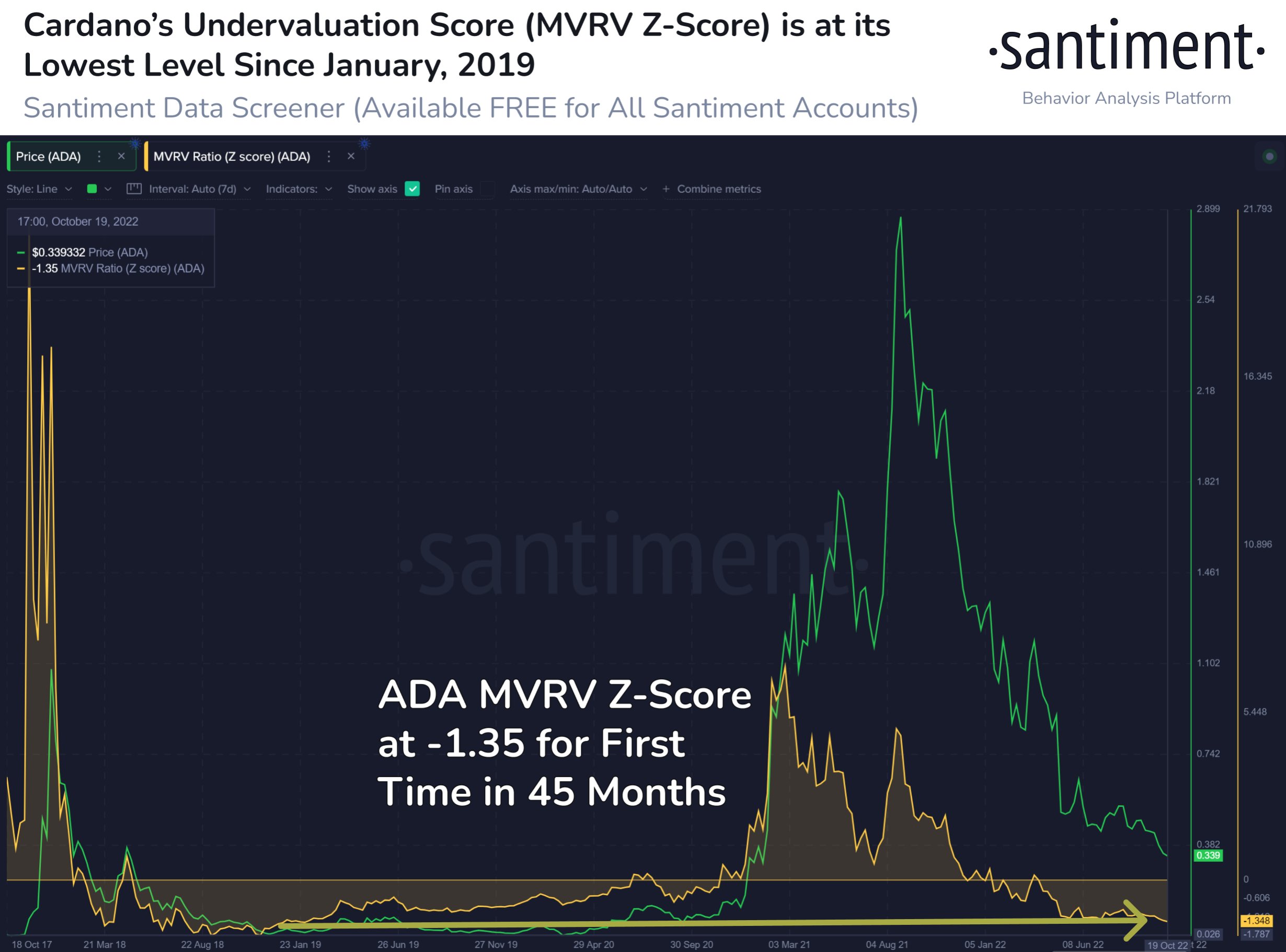 The last time the MVRV-Z indicator flashed, ADA’s price doubled in only three months. Considering all the underlying factors today, Cardano may repeat the success we saw a few years ago. However, the technical overview does not have any positivity.

Despite being oversold before it, Cardano dropped approximately 30% of its value in the previous 30 days, making it one of the market’s worst assets. Given the lack of activity surrounding the currency other than the brisk expansion of the Cardano ecosystem, the sudden decline in value is difficult to explain.

Cardano is still one of the most actively developed cryptocurrencies, according to GitHub, and this is supported by the wide range of recent releases, including Defi solutions and NFT markets. Given ADA’s subpar short- and long-term market performance, cryptocurrency investors do not appear to appreciate the project’s expansion. Holders of ADAs have not noticed an upward trend since 2021. Cardano has to see a 780% rally to return to the pre-ATH prices of 2021.

Earlier today, Charles Hoskinson, the creator of Cardano, teased the Cardano community with a major announcement. Without going into further detail, the well-known Bitcoin enthusiast believes that “something extraordinary” will happen in November. Hoskinson included an animated GIF using the tagline “Good News Everyone!” used by Professor Farnsworth from the Futurama animated television series from 1999. Anyone who talks about something positive in particular likes to utilize the meme.

After many delays, Cardano finally released its eagerly awaited Vasil update in September. The ADA token, which saw a big surge in the lead-up to the update, has made little progress since then. Hoskinson stated that the Cardano network was in the “wait-and-see” phase following the Vasil hard fork release during a recent interview with well-known YouTuber Ben Armstrong. Hoskinson asserts that he anticipates a lot of developments on the partnership side.

The convergence of the metaverse, GameFi, and non-fungible tokens on Cardano was “the biggest surprise,” Hoskinson says. “It’s brought a lot of new actors into our space,” he added.

The XRP community has criticized Hoskinson for calling the accusations made by its members against the SEC a “grand conspiracy.” Hoskinson has stated once more that XRP supporters are “muddying the waters” with their remarks and making it harder for the business community to adopt Ripple. He has emphasized that he does not wish to accuse every government entity of criminal activity. Hoskinson also criticized the “free pass” concept advanced by XRP supporters, asserting that they are sowing discord rather than winning crucial friends.