Cardano (ADA) is actually performing the most in the corrective phase of the crypto market, although Cardano price still has a long way to go to beat Bitcoin’s record highs. 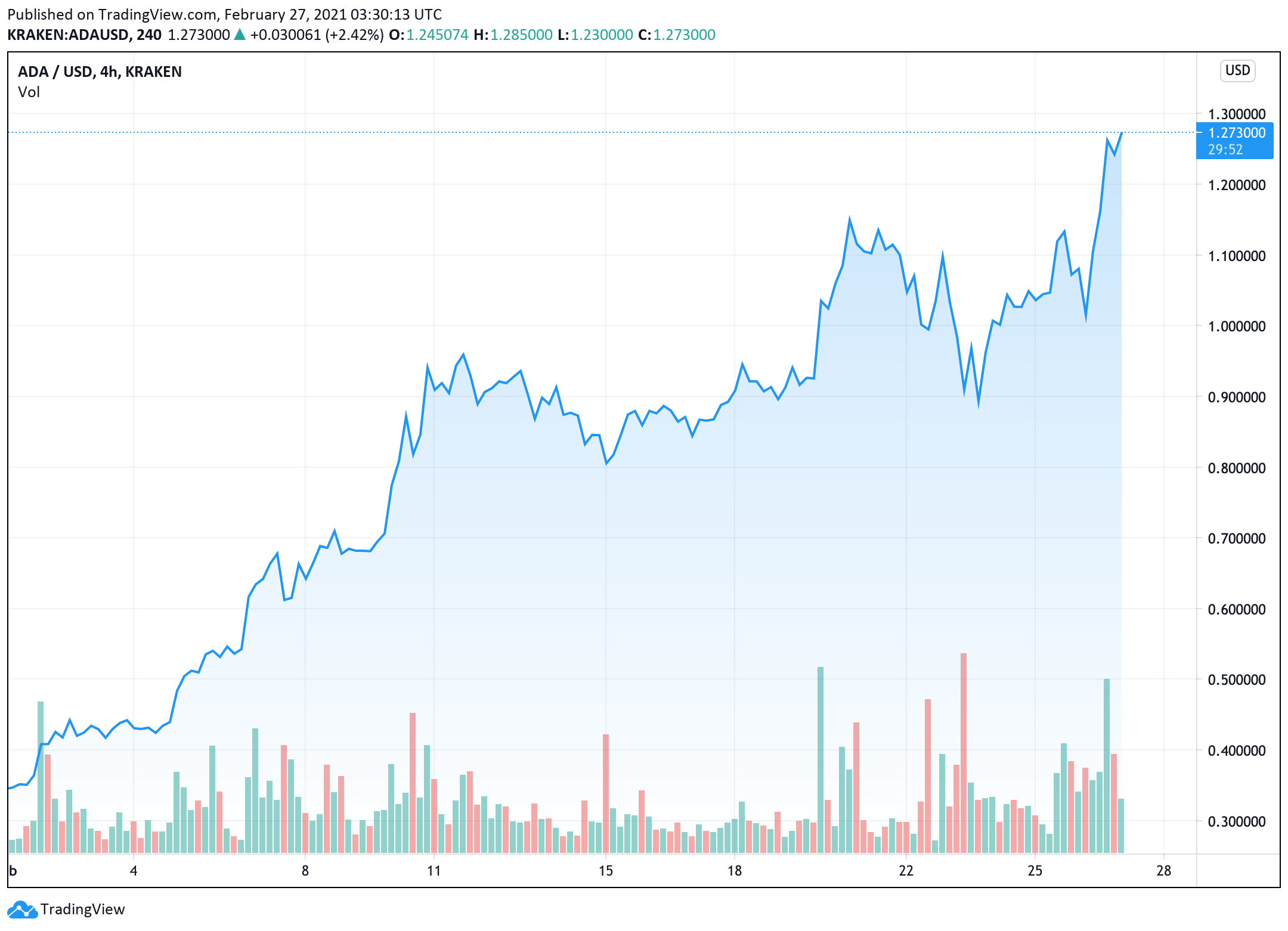 The ADA wave of growth was recorded on Feb. 26 when buying volume soared to record highs, helped ADA climb 27% from a low of $ 0.98 to establish a new ATH milestone at $ 1.29, and becomes the 3rd largest cryptocurrency by market cap.

The motivation for the project has been building throughout February, Cardano (ADA) approaches a major upgrade, aimed directly at Ethereum, after integrating Mary upgrade to Cardano’s testnet on Feb. 3. The upgrade enables smart contract functionality, helping to transform the blockchain into a multi-tier network similar to Ethereum. The Mary protocol will be running on the Cardano mainnet in early March this year.

The latest price hike coincides with Cardano founder Charles Hoskinson announcing Mary will appear on mainet on March 1. ADA quickly spiked to $ 1.17 after correcting pressure on the cryptocurrency market pushed ADA back below $ 1.00 on Feb. 25.

After that, ADA’s transaction volume rose to a new record of $ 12.8 billion. The open interest rate for ADA futures also increased to $ 580 million, overtaking Litecoin to become the third-largest derivative market.

Smart contract functionality is a key component of the Mary upgrade and is expected to usher in a new era of functionality for the Cardano ecosystem. Once integrated, decentralized financial applications will be able to operate on the network and provide a new solution for users looking to grapple with the high gas fees on the Ethereum network.

Dubai-based FD7 investment fund said Bitcoin is “pretty useless” to them, and that altcoins like Cardano are a better option for new investors.

Dubai-based cryptocurrency fund FD7 Ventures announced it will sell more than $ 750 million worth of Bitcoin over the next month to buy Cardano and Polkadot instead.

The fund claims to hold more than $ 1 billion in net assets, with the majority being Bitcoin. However, the fund’s executives believe that Bitcoin has fulfilled its purpose and that newer blockchains are a better choice.

“Apart from the fact that Bitcoin is first being marketed and investors see it as a store of value, I think Bitcoin is actually pretty useless Cardano and Polkadot will eventually be worth more than Bitcoin for a few next year.”

Welcome FD7 Ventures to the ecosystem https://t.co/CmQdOCDJ2x let us know if you need any technical support and we’d love to see you on Catalyst.

Some examples of these, the FD7 said in the release, are Cardano’s attempt to create a blockchain solution that addresses the needs of individuals without banks in Africa and continued growth. of Polkadot for the Web3 project’s ecosystem.