Bitcoin price action as of late is finally beginning to reflect the fundamental strength incurred throughout the past several months. Virtually all on-chain metrics are currently playing in bulls’ favor, while other fundamental developments – like the adoption of BTC as a reserve asset – also give it a boost. This fundamental strength maybe what helped lead the cryptocurrency up from recent lows of $9,900 to highs of $11,700 that were tapped just days ago. The cryptocurrency is now caught within a bout of consolidation as it struggles to surmount its $11,600 resistance.

That said, one trend seen while looking towards Bitcoin whale activity indicates that a flood of retail investors may soon enter the market. Bitcoin and the entire crypto market have, so far, seen a quiet day of trading. BTC has mainly been ranging around the mid-$11,000 regions, while altcoins all see similar consolidation phases.

The latest push higher that helped drive Bitcoin’s price to its current levels came about directly after news broke of Square buying $50 million worth of BTC to hold on their balance sheets as a reserve asset. As AZCoin News reported, Stone Ridge Holdings Group is stashing 10,000 BTC with the institutional asset manager’s crypto subsidiary New York Digital Investment Group (NYDIG), which on Tuesday announced it raised an additional $115 million in Bitcoin funding. It looks like Bitcoin is winning the fight to become a safe-haven asset.

This news seemed to spark the momentum that the crypto had been losing, ultimately helping to lead it all the way up to its recent highs of $11,700. One trend seen while looking towards whale activity does seem to indicate that retail investors are about to flood into the market.

At the press time, Bitcoin is trading down just over 2% at its current price of $11,430. This is around where it has been trading throughout the past couple of days. It is important to note that both bulls and bears have largely reached an impasse in the time following the cryptocurrency’s surge up to highs of $11,700 earlier this week.

Because bulls have gained control of the crypto’s mid-term trend, there’s a strong possibility that further upside is imminent in the near-term, but it does face some heavy resistance at $11,600.

“Historically, the start of a decline in the number of BTC whales has often signified increased interest from retail investors and the beginning of a run-up to a market top.” 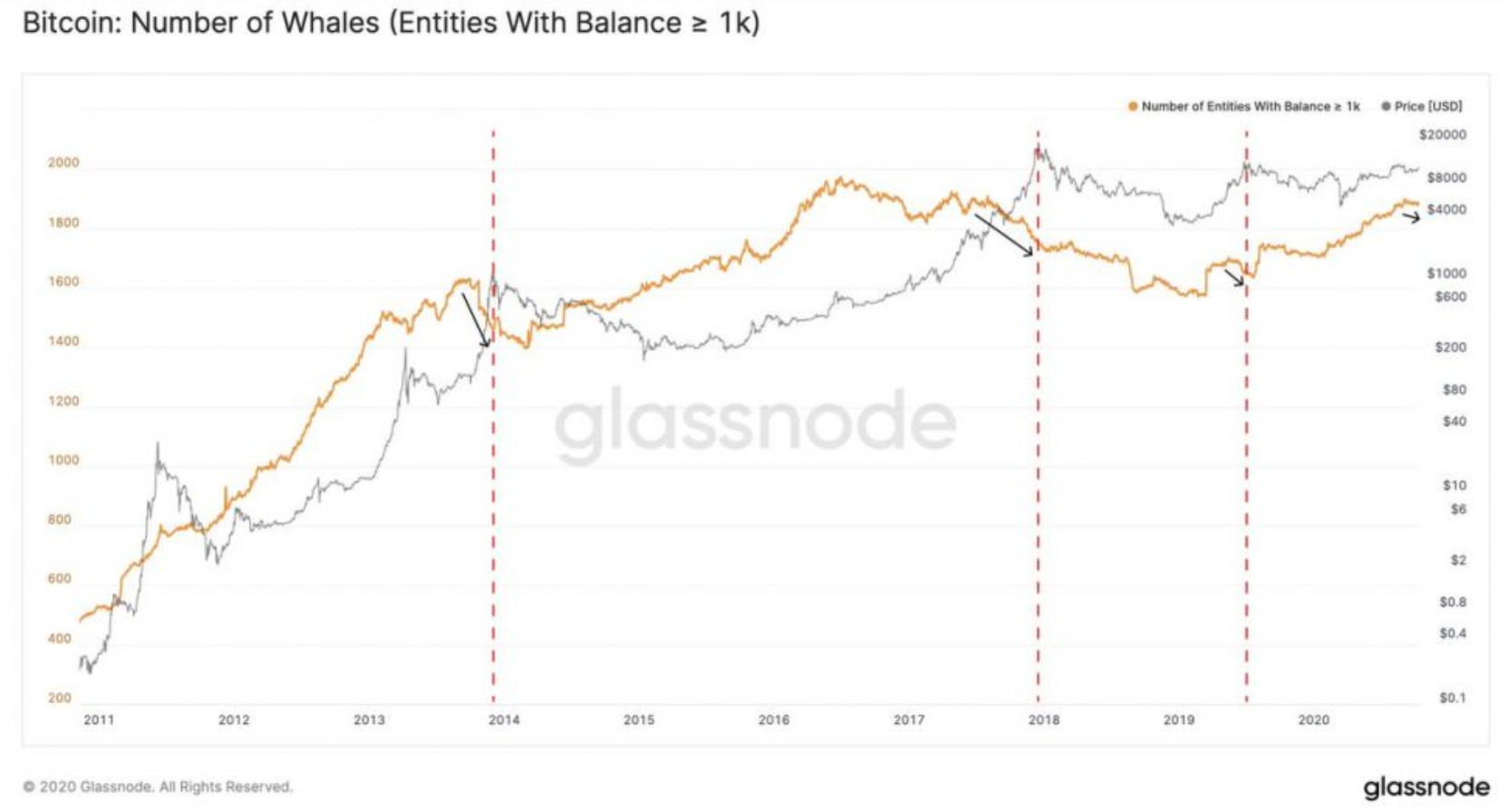 This trend – should it persist going forward – could mean that serious dry powder is on the sidelines waiting to be introduced to Bitcoin and the aggregated crypto market.

Bullish news that the Jack Dorsey-led Square, Inc. had added 4709 BTC to its corporate treasury reserves sent Bitcoin price flying $1,000 in just a handful of days. After such a sharp move up, the most dominant crypto asset in the space is already down $400 from yesterday’s high. As soon as the clock struck 8:00 PM ET and the new daily candle opened, a selloff took place.

The new candle open also triggered not one but two sell setups on the TD Sequential indicator that traders clearly followed. The TD Sequential, as its name implies, provides buy or sell setups depending on if a specific sequence of candles has been followed.

9 sell setups often suggest a reversal could follow and a top is in, while 13 countdowns indicate trend exhaustion.

Yesterday’s higher high on daily timeframes “perfected” the TD 9 sell setup and triggered the 13 setups as well. The fall thus far has already been so deep, that the 13 setups has fallen completely off the chart. But it triggered at the day’s open nonetheless.

Coinciding with the TD 9 and 13 combos, the turn of the calendar also began an astrological event that in the past hasn’t been very good to Bitcoin, and is known for stirring the pot in a number of other ways.

This phase, highlighted in red above and below, is called Mercury Retrograde. It is said to be responsible for all kinds of chaos in the human world, such as miscommunication, misfortune, and more.

It also has been negative for Bitcoin all throughout the bear market, as shown below. Most Mercury Retrograde phases result in markets miscommunicating about what the price of the leading crypto asset should be, and valuations have fallen.

The last phase didn’t result in many downsides, but prior to that was Black Thursday. Now, the last Mercury Retrograde phase of 2020 is here, and it ends exactly on the US election day of November 3rd, 2020.

If this phase acts like the past, Bitcoin could see some serious downside. And with the start of Mercury Retrograde coinciding with these accurate sell signals and the upcoming election uncertainty, it could be a recipe for disaster.