Exchange user BitMEX said the exchange is currently down, and the company is working to bring it back online as quickly as possible. At 12:28 UTC, BitMEX updated the incident to a significant outage and took the trading engine offline.

BitMEX Exchange Is Down, Investigation Is Underway pic.twitter.com/NjOZAjDXjI

Traders have suddenly been facing issues trading on BitMEX

In an update soon after the publication of this article, the exchange said:

“The BitMEX Trading Engine is currently down. We’re working to bring it back online as soon as possible. We can confirm all funds are safe, delayed orders will be rejected, and no liquidations will occur during the downtime. On coming back online, there will be a cancel-only period initially.”

Since BitMEX has been shut down, neither the web interface nor the API has been accessible to traders.

Although this is just a typical incident for exchanges, however, some users claim that the exchange is making an exit scam. This is also a correct view because, as AZCoin News reported, adding to the exchange’s woes, a lawsuit accusing BitMEX of racketeering and market manipulation is doing the rounds in the media. The company that initiated the suit against the exchange’s parent company, HDR Global, has previously filed lawsuits against Ripple and FTX.

“It just costs more to bribe them.” – Defendant Arthur Hayes (about U.S. authorities).

Good luck, @CryptoHayes. Guess you can need it! pic.twitter.com/s2fWL7NLCX

Therefore, the information that this BitMEX trading platform goes down to comes at such a sensitive time. With legal and technical obstructions for BitMEX, it’s’s time as the reigning king of Bitcoin derivatives may soon come to an end.

“We’re bringing the BitMEX platform back online, initial via cancel the only mode until 13:40 UTC, where no new orders can be placed. All funds are safe, withdrawals will be delayed until after the outage has been resolved, likely 15: 00 UTC. No liquidations will occur as a result of the outage.”

UPDATE: We’re bringing the BitMEX platform back online, initially via cancel only mode until 13:40 UTC, where no new orders can be placed. For official updates please follow https://t.co/fVa1FA9hNo and https://t.co/W9CnyCVKlU

At press time, the exchange has returned to regular operation. All funds are safe, and withdrawals will be delayed until after the outage has been resolved, likely at 15:00 UTC. No liquidations have occurred during the downtime. 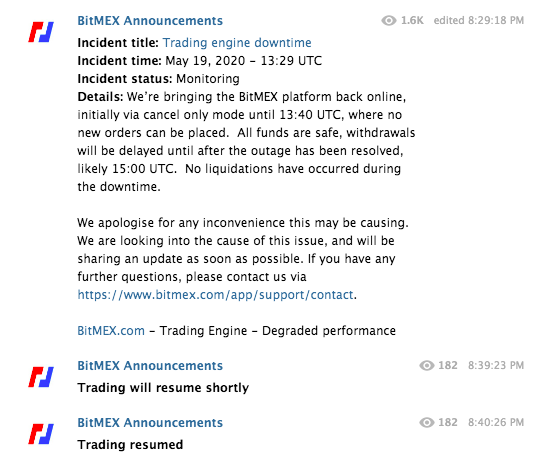 The recent update on exchange rankings on CoinMarketCap has some confusion about it and Binance, here are CZ response

Chairman of the Finance Committee in South Korea said…

Coinbase stated that the COIN.O options will start…

Coinbase, the largest cryptocurrency in the United…