BitMEX CEO Arthur Hayes: Bitcoin could “take the staircase” up to $20,000

BitMEX CEO Arthur Hayes recently suggested that Bitcoin could “take the staircase” up to $20,000. However, given that Hayes excels in trolling (not price predictions), Bitcoiners should exercise caution.

Nothing can stop me, I’m all the way up! Slow and steady wins the race. Let’s take the staircase up to #bitcoin $20k. pic.twitter.com/n90QN0vZ7k

The BTC price finally surpassed the psychologically important $10,000 mark at 3:19 UTC today. Considering that the leading cryptocurrency has just reached its highest level since Oct. 26, this fact prompted a lot of unnecessary excitement on crypto Twitter. 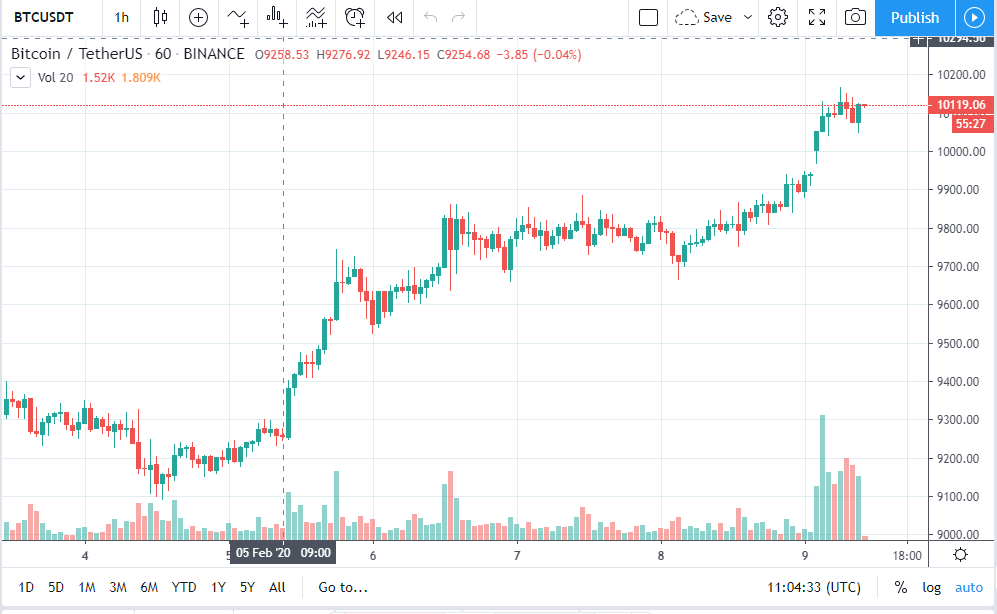 In an interview with Bloomberg on Jan. 8, Sonny Singh, chief commercial officer at payment processor BitPay, claimed BTC/USD would pass its all-time highs of $20,000 in 2020. The reason, however, would remain unknown until the bullish surge kicked in.

“Something unforeseen that could happen could really move it faster,” he summarized.

The reason is Bitcoin halving

Trader Van de Poppe predicts that the $10,000 level for BTC will result in journalists having to write about Bitcoin. In turn, this may cause a huge FOMO reaction.

When price breaks $10,000 -> newspapers will start to write about $BTC again and use the halving as a narrative.

Not only will the Bitcoin halving will affect the price, but it will also act as a narrative used by the media to attract the attention readers. It may result in pre-halving euphoria and the possibility of a bull rally.

Mr. Van de Poppe also recalled that in 2016, prior to the second Bitcoin halving, a similar process started only five weeks beforehand. In terms of the upcoming halving event, this period will start in the early days of April, 2020. .

The popular trader Anthony Pompliano saw this an opportunity to jump into the race to compete for the most bullish price prediction of 2021.

According to his earlier forecast, BTC was supposed to hit $100,000 in 2019, which turned out being incredibly inaccurate. However, this time around, Pompliano might hit the nail on the head with the April halving in the offing.

Cardano: The Shelley Incentivized Testnet has attracted 15,232 active users to date and over 11.35 billion ADA have been staked and delegated