The Ponzi scheme Bitisis has gone bust, suspecting the scammers are from China

According to the Chinese media, cryptocurrency exchange Bitisis went bankrupt. The scammers controlled several overseas exchanges that claim to be able to carry arbitrage to attract individual investors and then went bust with the investment capital. 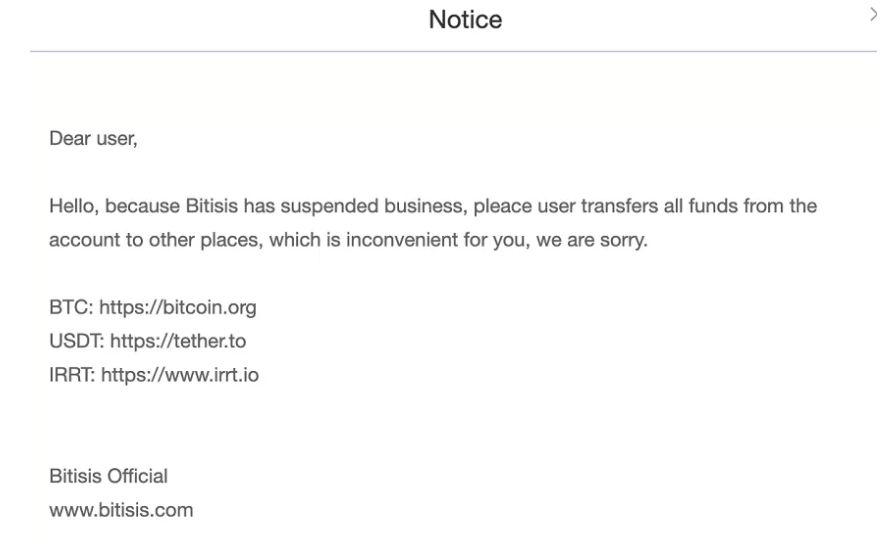 Bitisis was initially supposed to be a Ponzi model

The Bitisis is basically a Ponzi scheme. It allows users to convert their Bitcoin into the platform’s IRRT token and then uses the so-called high premium to convert into USDT.

Bitisis has two main marketing methods. First, in combination with hot geopolitical events, the exchange boasts high prices distributed through various media to attract people from the treat. Secondly, in Chinese social media like Zhihu, Tieba, Douban, and Baidu, it distributes a lot of press releases, making the search information all false information and press release.

According to some sources, the person behind Bitisis is from China. Currently, Chinese police have included the case in the investigation file. The exchange transferred user assets to three addresses, and the police froze the relevant addresses in an emergency.

Fortunately, the victims contacted the relevant staff of a significant exchange. The staff then analyzed the address on the chain and found that there was indeed one address that moved Bitcoin to a considerable exchange, so the address was suspected of being frozen in time.

Indeed, the scammers are from China, because it is only promoted in the Chinese media and community. Moreover, Bitisis was also revealed by netizens to be using Alibaba’s cloud server in the early stages.

The rapid freezing of Bitisis’ addresses by other significant exchanges shows the technical background of these scammers is impoverished. If scammers use coin mixers, transfer money, and cash through small exchanges, it will make tracking difficult.

It should be noted that the Bitisis’s team also has several other fraudulent websites based in other countries, such as “bit-ven.com” in Venezuela. As like as two peas of Iran-based Bitisis, the marketing model and channel of arbitrage are almost the same.

In a nutshell, any platform that claims investors will receive a lot of profit is almost a scammers. Therefore, if you are accidentally cheated or fall into this case, you should be careful and immediately notify the local police.

Good Cycle is allegedly victim of Ethereum transactions at $5.2 million fees and is Ponzi scheme