Bitcoin’s average transaction value has reached levels not seen in more than a year, topping $129,000

The last time Bitcoin’s average transaction value rose above $121,000 was in August 2019, when one or a few massive transactions pushed the total to more than $812,000 on average. And that was an anomaly; the average cost of a Bitcoin transaction hasn’t been this high since late 2017 when Bitcoin price hit its ATH price of just below $20,000.

The latest rise is a sign of sustained, heightened activity on the Bitcoin blockchain. Coinciding with this, other crypto networks are seeing their own record-breaking activity.

Ethereum-based DeFi applications, decentralized versions of financial services like loan providers and interest-bearing products backed by crypto, have attracted much of the attention within the crypto ecosystem in 2020, but Bitcoin hasn’t been left behind.

Bitcoin futures trading has reached record levels on some exchanges, and the number of Bitcoin ATMs installed around the globe recently crossed the 10,000. DeFi may be stealing the show, but Bitcoin network stats reveal that the original crypto asset isn’t likely to be left behind.

Novogratz suggesting that Bitcoin price is only trading at the current level is because it remains early innings for the industry. He explained that if there were more understanding and belief behind the leading cryptocurrency, the price would be way higher.

Novogratz was responding to a crypto investor who is waiting for the Bitcoin to moon despite not being able to convince her family and friends about the benefits of BTC. There have been green shoots of Bitcoin adoption of late, the most recent of which being MicroStrategy upping its holdings from $ 250 million to $ 425 million. 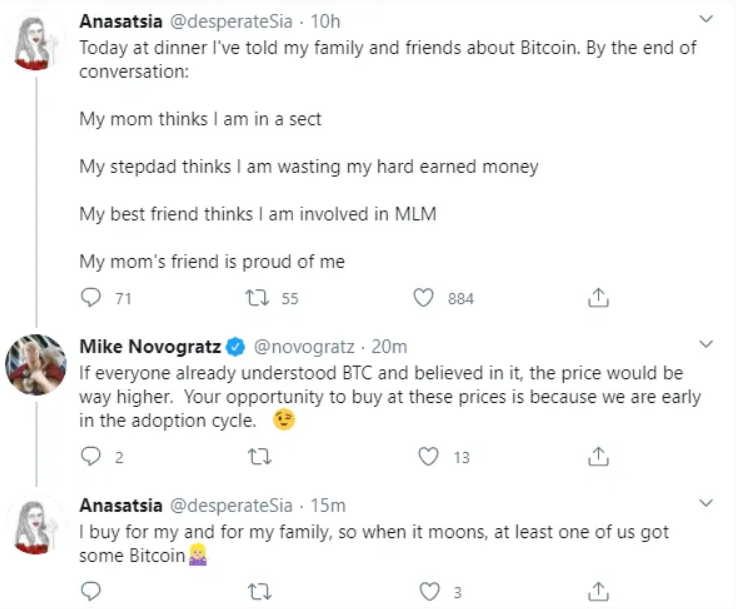 Novogratz has previously shared how he holds big positions in both Bitcoin and gold. In an August interview on CNBC, the billionaire investor revealed that even after missing out on some gains in the stock market, rather than keeping him up at night he’s been sleeping like a baby with Bitcoin.

UNI price fell by 30% overnight from its ATH of $ 7.37 but the business on Uniswap is better than ever