The price of Bitcoin dropped by roughly 3% today on news that 50 BTC mined in early 2009 were moved unexpectedly. This led to speculation that Satoshi Nakamoto—the pseudonymous creator of Bitcoin—had moved part of his dormant crypto stash. That speculation, though, seems to be mostly unfounded based on available evidence. 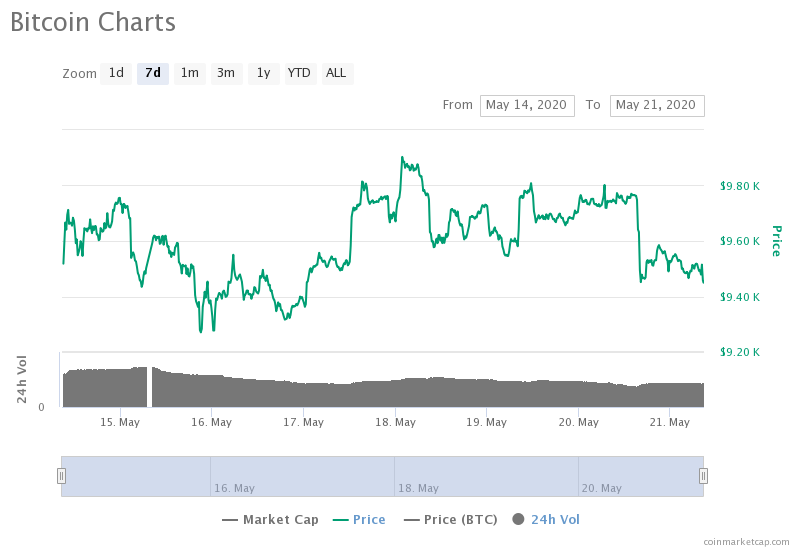 While Bitcoin dipped to $9,500, competitors like Ethereum also dropped slightly. ETH is currently trading for about $210—a 1.8% fall from the $214 it was enjoying earlier today.

Stocks, on the other hand,  as the Dow Jones Industrial Average futures fell 207 points, implying an opening loss of about 193 points. S&P 500 and Nasdaq-100 futures also pointed to weakness at Thursday’s open.

The overnight moves came on the back of sharp rallies in the major stock indexes so far this week.

The Nasdaq Composite and S&P 500 both extended week-to-date gains during Wednesday’s regular trading session and finished the day up 2% and 1.6% respectively. The broad S&P 500 closed at its highest level since March 6 on Wednesday afternoon.

The Dow industrials, meanwhile, finished Wednesday’s trading up 369 points, or 1.5%, as Apple, Disney and McDonald’s all added at least 30 points to the blue-chip index amid a surge in reopening optimism.

The moves follow a trend among all 50 US states to begin reopening their economies by varying degrees. While rules differ from state to state, it’s a promising sign of rebounding economic activity, which has been saddled by the coronavirus pandemic. Colleges and universities across the country are also beginning to weigh the possibility of holding fall classes.

That trend may have something to do with the potential for a COVID-19 vaccine to hit the market sooner than anticipated. US immunotherapy company Inovio Pharmaceuticals, much like competitor Moderna Therapeutics, is experimenting with a coronavirus vaccine and says its formula has produced antibodies in both mice and guinea pigs.

The company also began human trials in April, though these results likely won’t be available until June. Inovio now says it’s looking to test the vaccine on larger animals, such as monkeys and rabbits.

Bitcoin price started a bearish wave after it failed to continue above the $9,950 and $10,000 resistance levels against the US Dollar. BTC price is down more than 3% from the weekly high and it broke the $9,540 support zone.

The recent decline was such that the price even broke the $9,400 level and settled below the 100 hourly simple moving average. More importantly, there was a break below a major contracting triangle with support near $9,600 on the hourly chart of the BTC/USD pair.

If bitcoin fails to recover above the $9,540 and $9,640 resistance levels, there are chances of more losses in the near term. An immediate support is near the $9,400 level.

Brian Armstrong: Employees can work from home, Coinbase planning to decentralize and have small offices in 10 cities