In the first half of 2020 alone, scammers made $ 24 million worth of Bitcoin, and those Bitcoin scammers won’t stop. Recently, the Whale Alert Twitter account uncovered some new information and concluded: “Crypto crime pays. A lot.”

🚨🚨🚨 Scam Alert has been online for a few weeks now and we have written a short article about our findings so far. Check out how much is being made with scams in the link below!https://t.co/Yc3WZjoet3

Whale Alert has gathered and analyzed data from Bitcoin reports, websites, and addresses with their new blockchain crime tracking tool, Scam Alert. And eventually, they think the crooks have stolen $ 38 million worth of bitcoin over the past four years. That’s not to mention the Ponzi plans. Whale Alert is expected that by the end of 2020, Bitcoin scammers will generate at least $ 50 million in annual revenue. 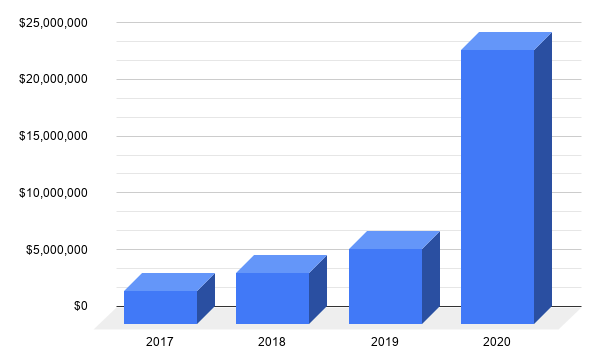 Figure: Total Scam Revenue Per Year (Until the First Half of 2020, Excluding Ponzi Schemes)

“The scam market is flourishing because scams have become more believable and aggressive.”

As you all know, giveaway scams are increasingly sophisticated. These scams use the identities of celebrities like Elon Musk, combined with ads on YouTube and bitcoin addresses, to trick people into sending bitcoin. Recently, as AZCoin News reported, there is a crook trying to impersonate Justin Sun, Tron founder, to sell privacy coins pegged to the value of real TRX. But AZCoin News must warn people, and this is not an actual investment project but just a scam project – a fake Tron privacy asset.

My adventure with “Fake Justin Sun” documented in @cointelegraph not the real @justinsuntron who was kind enough to alert me to the fraudster. https://t.co/AGyiFolEhv

Whale Alert says the improved method suggests experts can be behind some of the most successful scams.

Although there are many different types of scams, they all have one thing in common: the criminals behind them are almost at risk of being arrested.

“One thing is obvious: whatever is being done right now to stop these criminals is not enough, and if we don act as a community, the reputation of blockchain might not be able to recover in the long run.”