Bitcoin price traded little changed, while Ether fell along with most other non-stablecoin

Bitcoin price took the news in stride, trading sideways for most of the day, even as additional revelations surfaced from documents connected to FTX’s filing for bankruptcy protection. The largest cryptocurrency by market capitalization was up 1.1%, changing hands quickly over the $16,000 support it assumed nine days ago.  At the time of writing, BTC is changing hands at $16,921. 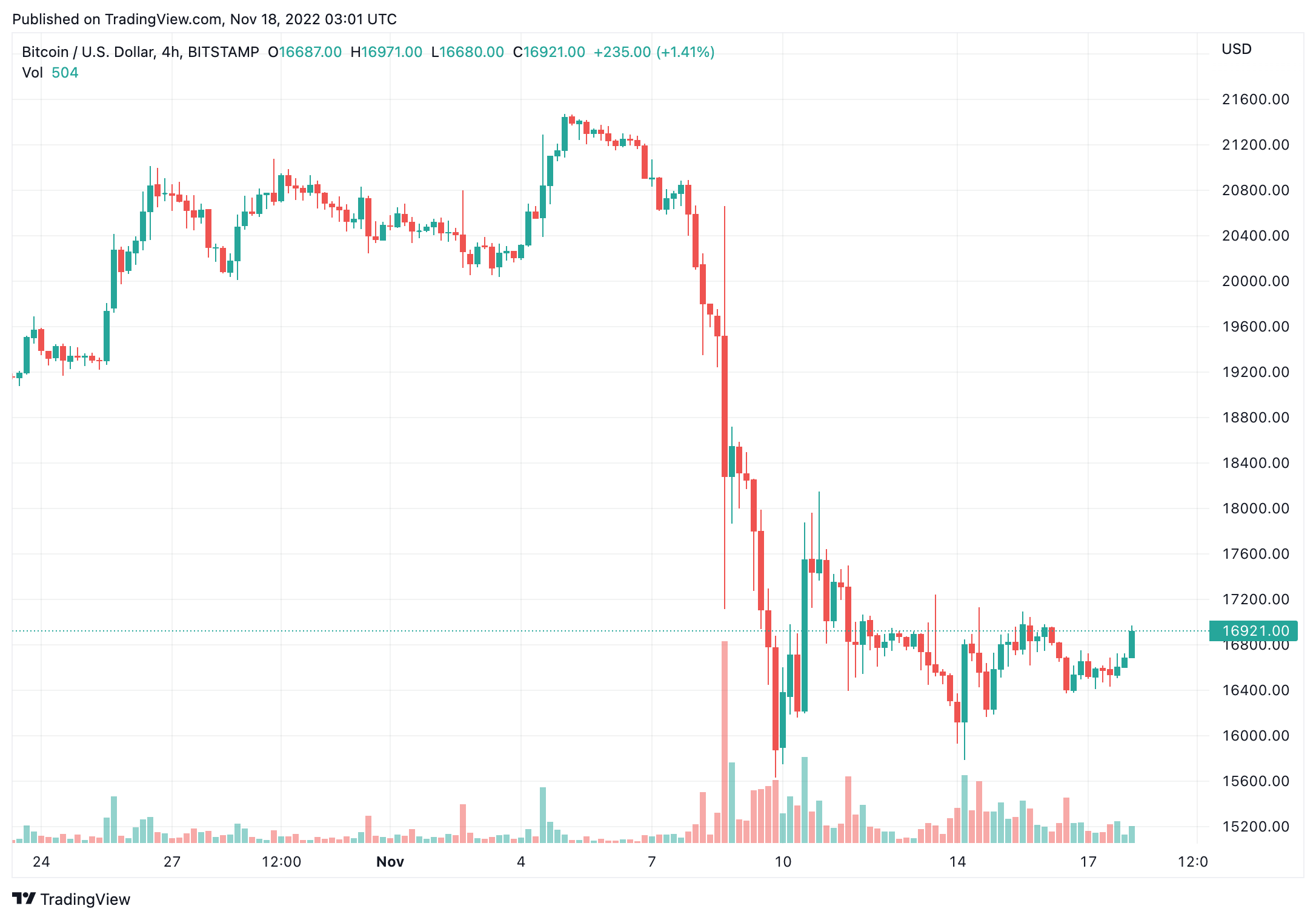 Bitcoin traded 0.1% higher to $16,684 in the 24 hours to 8 a.m. in Hong Kong, while Ether fell 1.25% to $1,200. XRP rose 1.7% to change hands at $0.38 as the U.S. lobby group Blockchain Association joined other institutions in filing amicus briefs to support Ripple in its court fight with the SEC. “The SEC’s extremely broad interpretation of the securities laws would have devastating effects on the industry (and even outside the industry),” the Blockchain Association said briefly.

Solana posted the heaviest losses in CoinMarketCap’s list, falling 4.6% to $13.62 and adding to two weeks of declines amid the FTX.com collapse. The latest concern for Solana investors came from Binance Global Inc., the world’s largest cryptocurrency exchange, which flip-flopped on Solana-based variants of leading stablecoins USDT and USDC, saying on Thursday it was suspending withdrawals and deposits only to reverse itself a few hours later.

U.S. equities finished lower on Thursday, posting their first back-to-back losses in two weeks. The Dow Jones Industrial Average fell 0.02%, the S&P 500 Index dropped 0.3%, and the Nasdaq Composite Index closed the day down 0.4%. St. Louis Federal Reserve President James Bullard said on Thursday that the Fed’s benchmark interest rate might need to go as high as 7% to slow inflation. “Thus far, the change in the monetary policy stance appears to have had only limited effects on observed inflation, but market pricing suggests disinflation is expected in 2023,” he said.

The U.S. Federal Reserve has been raising interest rates since March to slow inflation from near zero to a 15-year high of 3.75% to 4%. The Fed has signaled that it will continue to raise rates until inflation reaches a target range of 2%.

Recent data suggest that inflation is beginning to cool in the U.S. as the producer price index released earlier this week showed wholesale prices increased 0.2% in October — below the 0.4% anticipated by analysts — while the consumer price index showed inflation was running at 7.7% in October, down from 8.2% in September.

OneCoin’s criminal enigma Ruja Ignatova may now be a man