Bitcoin price traded above $21,000 for a fourth consecutive day

For the fourth day, Bitcoin price preferred the atmosphere over $21,000. According to market capitalization, the biggest cryptocurrency was recently trading at $21,215, up 1.2% over the previous day but still much more than where it was a little more than a week ago. BTC has increased by about 25% over the last seven days, mainly due to investors’ optimism that inflation is declining and the economy will fall softly. At the time of writing, BTC is changing hands at $21,307. 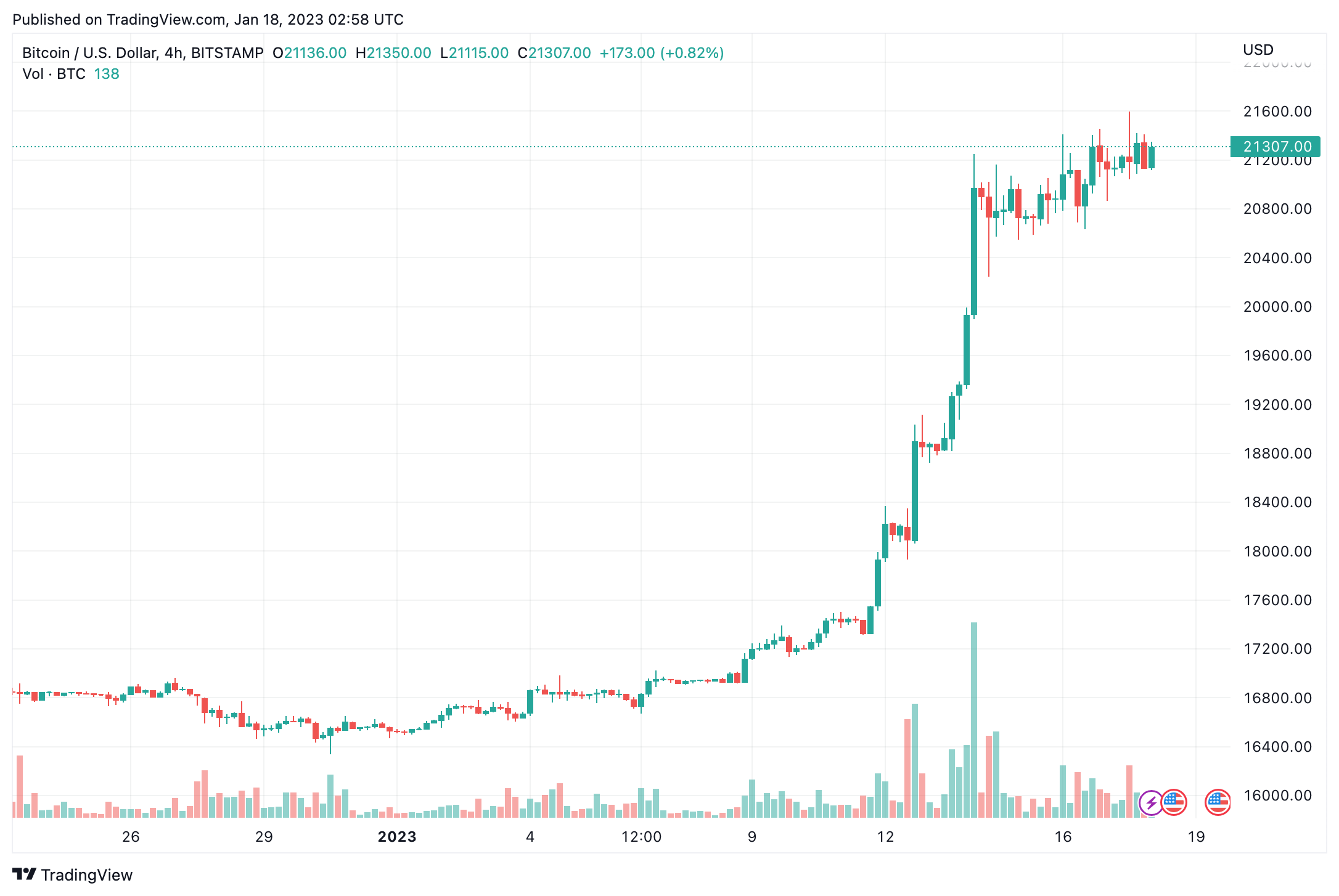 Bitcoin Price Hangs Tough Over $21K for Another Day

In a quiet morning of trading on Wednesday in Asia, just a couple of the top 10 non-stablecoin cryptocurrencies moved by more than 1% in any direction. This left Bitcoin and Ether little altered. Polkadot stood out in the good, while Solana suffered the most loss the day after making the biggest gains on the list.

“As market-wide pumps have flattened out for now, several altcoins continue individual runs. AAVE (+1,100%), MANA (+871%), and LTC (+75%) are up big on $100k+ transactions since New Year’s. Watch how the increase in whale engagement impacts prices”, Santiment reported. 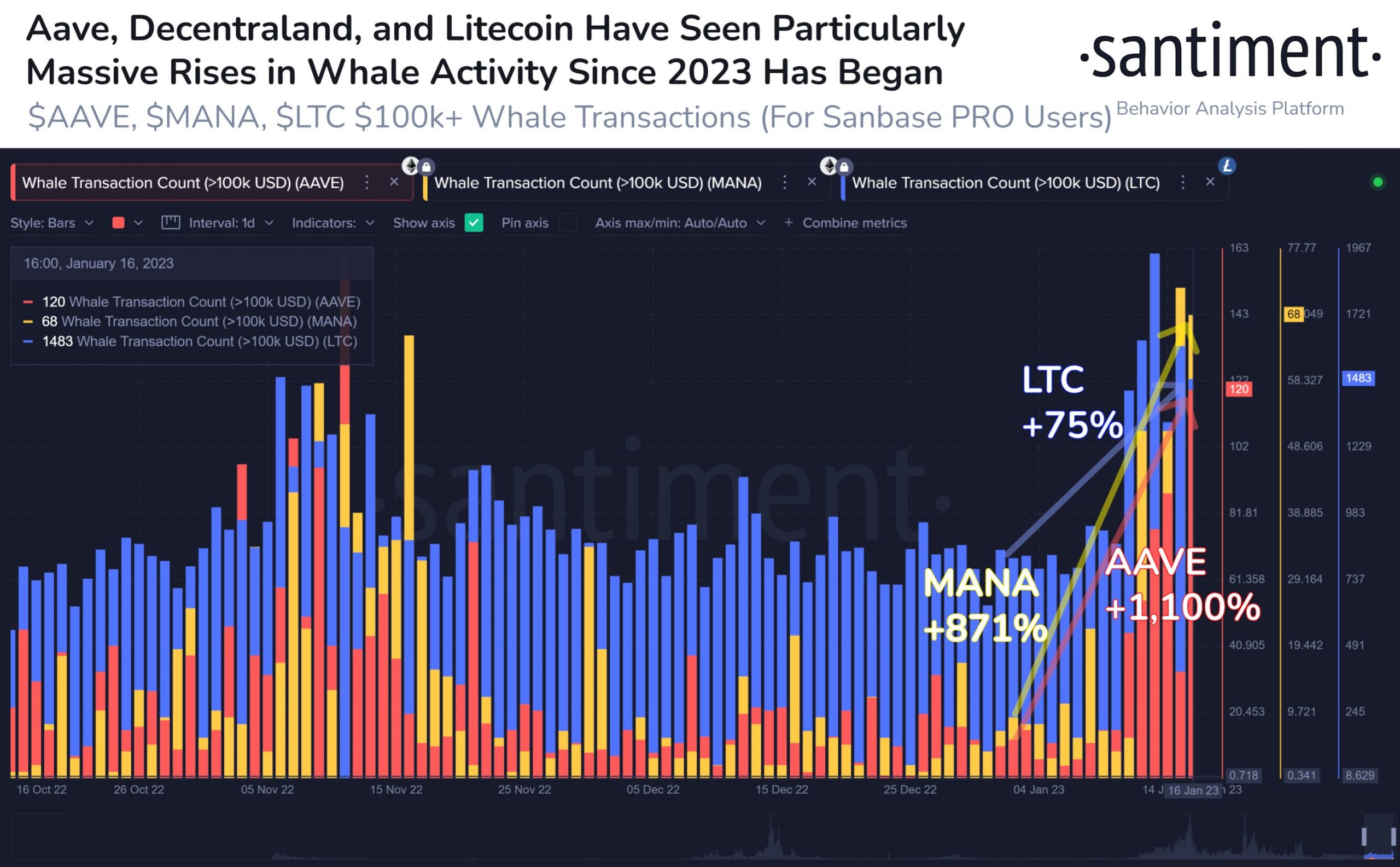 The price of the meme coin Shiba Inu recently increased by more than 12%, and DOT, the smart contract platform Polkadot token, increased by more than 4%. Polkadot increased 2.7% to $5.96, a gain of 21.2% over the previous week. The network’s XCM “cross-consensus messaging” format was upgraded to version 3 on Wednesday, which is said to facilitate cross-chain communication and set the foundation for NFTs on the network. This upgrade is the cause of Wednesday’s increase. Litecoin increased by 1.5% to $87.12 and 7.7% over the previous seven days. Despite falling 2.9% to $22.90, Solana was still up 41.4% for the week.

📊 #Crypto‘s market-wide breakout to start the year certainly has grabbed the attention of traders. #Bitcoin whales have finally come through and have given the #altcoin faithful there long-awaited bounce. But what now? Our mid-month report breaks it down. https://t.co/kDJbgDgLjh

Goldman Sachs Group Inc.’s disappointing earnings results on Tuesday contributed to the Dow’s losses, which ended a four-day winning streak for the index as the bank’s shares fell more than 6%. Goldman’s Q4 profits dropped to $1.19 billion, much below projections and down 66% from $3.81 billion a year ago.
The fourth-quarter revenue for Morgan Stanley & Co, LLC came in at US$12.75 billion, exceeding forecasts of $12.54 billion. Other banks also reported better-than-expected earnings. Shares increased by about 6%.

While trade volume dropped 11.4% to $48 billion during the course of a day, the overall market value of cryptocurrencies increased by less than 0.1% to $991.9 billion.