Bitcoin price today fell 7% to $ 36,000, leading to many leading cryptocurrencies decline, the market filled with red

Bitcoin price has suddenly dropped more than 5% in just three hours this morning. At press time, BTC is trading around $ 36,879, recording a 7% drop over the past 24 hours. Analysts often assume this volatility is due to the overheating of the derivative market and the coming of a new weekly candle. However, in the opinion of many traders, Bitcoin is correcting its price after these shocking days. 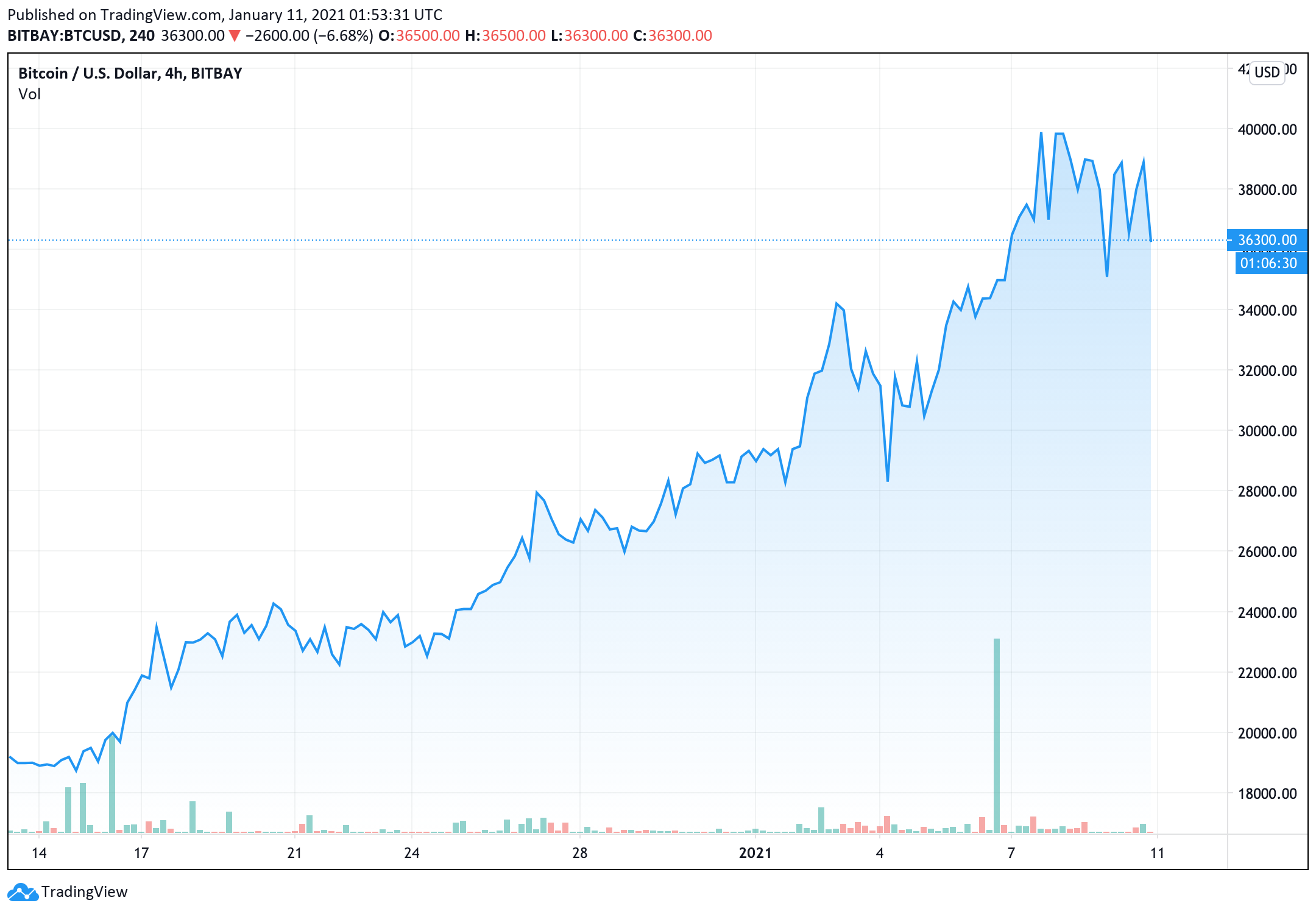 Why do some technical analysts expect Bitcoin price corrections?

Bitcoin has more than doubled in less than a month, to over $ 43,000. While many investors consider this price rise justified, some experts argue that Bitcoin is being over-speculated, according to investment strategist Michael Hartnett at Bank of America Securities. mother of all bubbles.

As AZCoin News reported, Hartnett pointed out that Bitcoin has increased by almost 1,000% since the beginning of 2019. This rate is greater than the growth of bubbles over the past few decades. For example, in the late 1970s, gold increased by more than 400%. Japanese stocks in the late 1980s, Thai stock markets in the mid-1990s, bubble dot-coms in the late 1990s, and real estate prices in the mid-2000s all had a 3-digit growth rate before they collapsed.

Hartnett does not forecast a sharp drop in Bitcoin price. Instead, this expert considers the price volatility of cryptocurrencies as an example of growing speculation.

Hartnett is not the only expert to warn about Bitcoin. The fact that the greenback has been somewhat stable over time has caused some experts to warn Bitcoin will no longer be a tool against the devaluation of the currency.

Bitcoin has been consolidated from $ 38,800 to $ 41,000 over the past 72 hours. Considering that this is a weekend and there is a low volume around, the probability of BTC falling and testing the low of the range is high.

Scott Melker, a cryptocurrency trader, Bitcoin to sweep the lows of the range, which it did. BTC dropped slightly lower than $ 38,800, which caught many traders off guard.

Here is the sweep of the lows that I mentioned in the previous tweet. pic.twitter.com/GNMxDLdcjX

Some traders have bid at the $ 39,300 support with a stop below $ 38,800. However, BTC fell sharply than expected, causing more stops to be triggered. In the short term, traders are generally cautious and uncertain about the price trend of BTC.

On January 11, Bitcoin will witness a new weekly candle, often encountering a spike in volatility. Many stops have been cleared and there is a “high range” liquidity. This means that BTC is likely to climb to the top of the range at $ 41,000.

There are two scenarios in the short term. First, Bitcoin could retest the high of $ 41,100 and pull back again. Second, Bitcoin could climb to $ 41,100 again and break out of it this time, as BTC has historically tended to break out on the third retest.

However, several traders have correctly identified the emergence of famous tweets around the cryptocurrency, which previously marked BTC’s peak in previous bull cycles.

It’s not necessarily bullish or bearish in terms of technicals.

I don’t expect price to crash tmrw because Katy Perry has crypto nails or KSI tweets about $ETH.

I just like using them as a gauge for where we are in the cycle.

That doesn’t necessarily indicate that Bitcoin is falling or rising. However, it can be used as a way to gauge market sentiment.

Dan Larimer is resigning from his post as the CTO of the development company Block.one, EOS price down 22% for the day