The Bitcoin price rose 2% early on strong volume before reversing course. Prices began their push higher in overnight activity before falling. At one point, the price of the largest cryptocurrency by market capitalization breached the psychologically important $20,000 mark, but it is now resting under $19,100, about where it started the week. At the time of writing, BTC is changing hands at $19,009.

Bitcoin price and other cryptos rise and fall

Bitcoin and ether started the day higher before falling during Tuesday afternoon trading. As traditionally bearish September comes to a close, cryptocurrency markets are hoping the record of bullish Octobers continues. Since 2014, October has been second only to February as the best month for average daily returns. Conversely, September is the worst month for average daily returns over the same time frame.

In topsy turvy Tuesday trading, bitcoin and other cryptocurrencies rose early before crumbling.
The largest cryptocurrency by market capitalization was recently trading just over $19,100, down about a percentage point for the previous 24 hours. BTC had surged above the psychologically important $20,000 threshold during morning hours (UTC) for the first time in nine days before clattering downward to more familiar levels.

Bitcoin’s rise and fall came as investors initially may have tried to anticipate cryptos’ historically bullish October by adding to their holdings. And two unexpectedly strong economic indicators may have also buoyed their spirits before. But investors later recoiled over inflation and recession fears that have plagued asset markets of all stripes for months.

“Things were looking up for crypto this past week before the S&P 500 took another nosedive and brought down BTC, ETH, and the rest of the digital assets. Nevertheless, there have been signs that the tight correlation between sectors has been breaking”, Santiment stated. 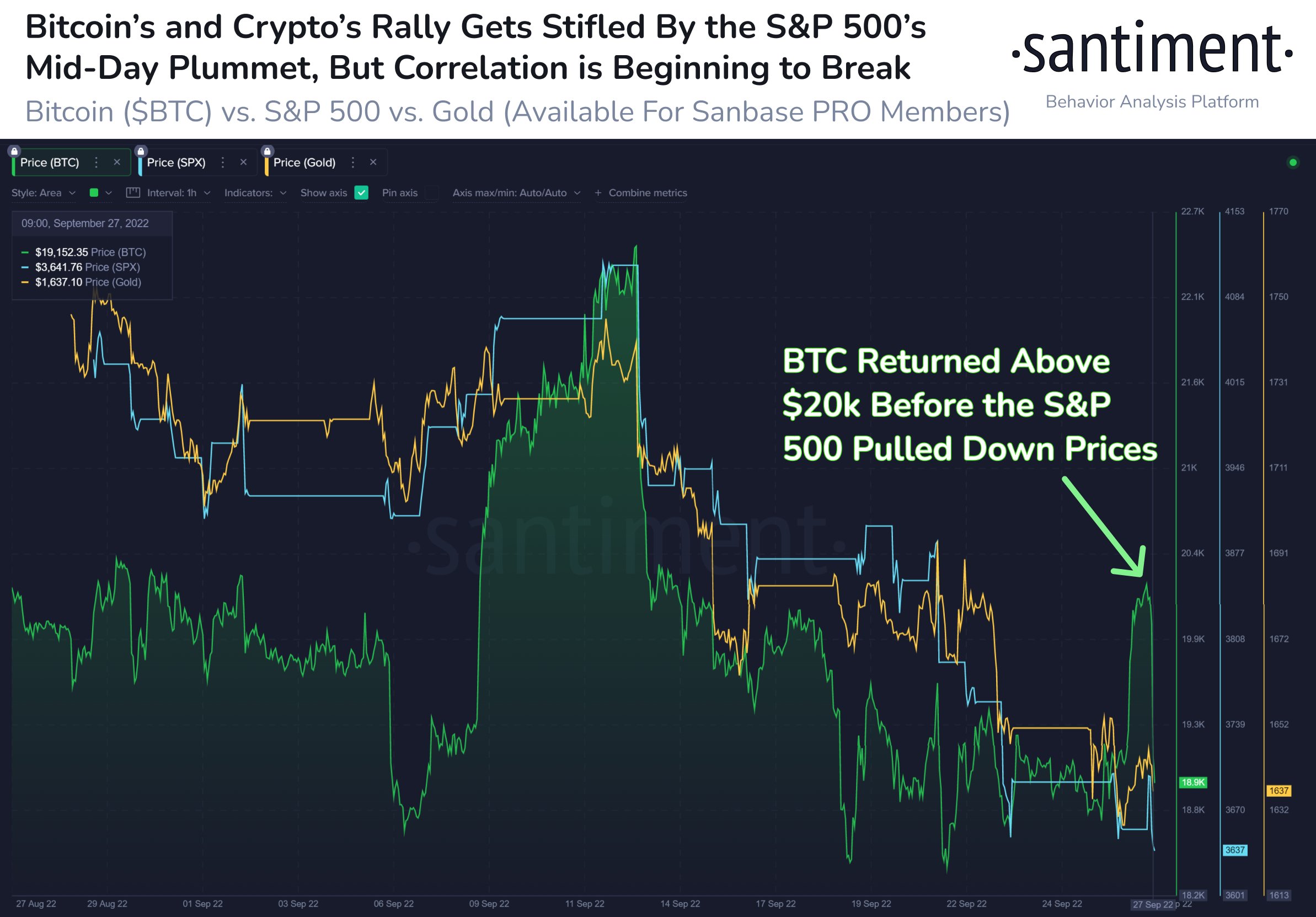 Most other major cryptos spent the day in red territory, with UST recently off about 7% and XRP down more than 5%. Celsius’ native token CEL spiked late Tuesday after reports that FTX’s Sam Bankman-Fried could bid on the bankrupt crypto bank’s assets. The token had nosedived earlier Tuesday after the surprise departure of Celsius CEO Alex Mashinsky.

“Chainlink has been showing hints of being somewhat decoupled from crypto since September 21st and has just reclaimed the &8 thresholds again. High stakeholders have been growingly active, and this is often the key to sustained altcoin rallies”, Santiment reported. 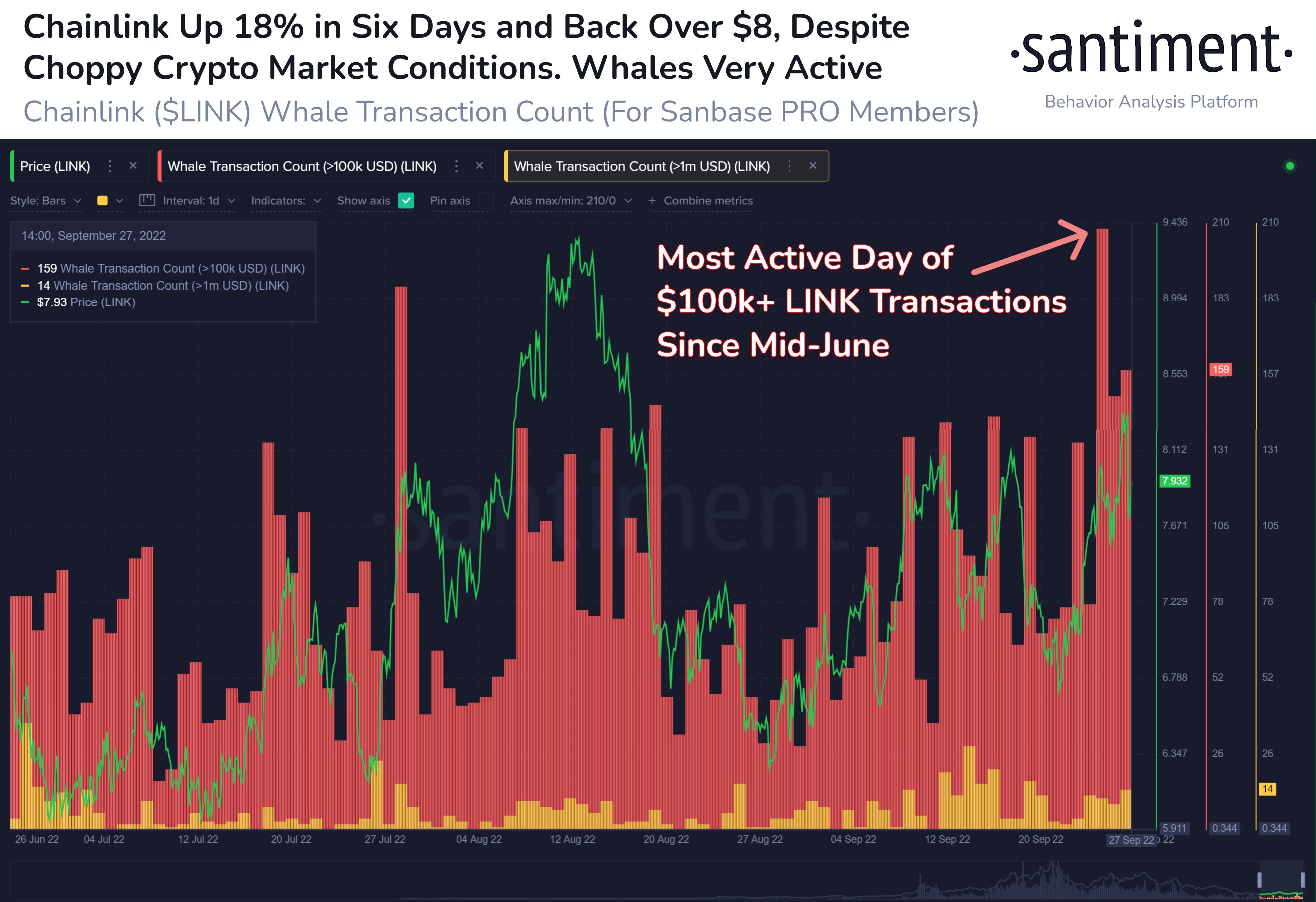 The overall cryptocurrency market cap stands at $931 trillion, and Bitcoin’s dominance rate is 39.2%.

Bitcoin price and other cryptos sink some, but not…

Will Ripple be defeated by the Securities and Exchange…

Ethereum developers have set March 2023 as a tentative…

Bitcoin price and other cryptos sink some, but not enough to…

The CyBall football play-to-earn game announced that it had reached an agreement to be acquired by Coin98 Labs, the…
Ethereum News

The planned Shanghai upgrade will be released in March 2023, Ethereum developers decided during the year's last All…
Bitcoin News

With Bitcoin recording a high in 2021, the crypto community has been expecting BTC to surpass $69,000. However, in…
Breaking News

In this week’s edition of Option Flows, Tony Stewart comments on a brief and short-lived buying spree as BTC+ETH…
Breaking News