Over the past 24 hours, XRP prices have also increased by more than 8%, along with the steady growth of Bitcoin price. Some cryptocurrency analysts said the previous period was the accumulation period. Therefore, this is probably the time when many people want to start taking their money out.

If you have not taken your money off the table yet, I don’t know what you’re waiting for!

Magic Internet Money Podcast host Brad Mills has urged investors to withdraw money from the market, as he said the S&P 500 index would fall further next week.

“If you have not taken your money off the table yet, I don’t know what you’re waiting for. Monday is not going to look good. Likely all 3 circuit breakers will be hit sometime soon. -7, -13%, -20% everyone go home. 1-2 week markets turned off, then no short selling.”

He also mentioned Bitcoin, giving a deep downward trend that it will collapse even harder than last week, losing about 50% in a day. He is considering selling more BTC.

Yes, Bitcoin is going to get rekt badly once more before this is over.

However, CTO Ripple, David Schwartz, totally disagrees with this view.

Why does CTO Ripple disagree with the Bitcoin price cash out?

Schwartz said that at this point, it’s not worth following Mills’s advice. He noted that other investment instruments are also shaking, including the banks themselves.

If you take it off the table, where do you put it? Bond funds are also risky, money market may break the buck, are banks even safe?

Share on this issue, and Mills answered that cash must be withdrawn and distributed on various assets, including banks.

“Heavyweight cash & deploy it conservatively; own different assets. Invested in things & businesses as the trend shifts, cash is temp. I’m slowly moving out and will slowly move back in so I don’t do any YOLO bets. Spread cash across multiple banks.”

Meanwhile, cryptocurrency trader Josh Rager believes the current surge in Bitcoin prices is not enough to raise prices. He tweeted that BTC needs to flip at least $ 6,400 to start a decent rise again.

XRP/USD: Have any growth patterns formed yet?

As leading cryptocurrencies decline, XRP slows more slowly – and the same can be said of its growth models. Its increase has reached 8.53% in the past day while Bitcoin price and Ethereum have increased by more than 10%. 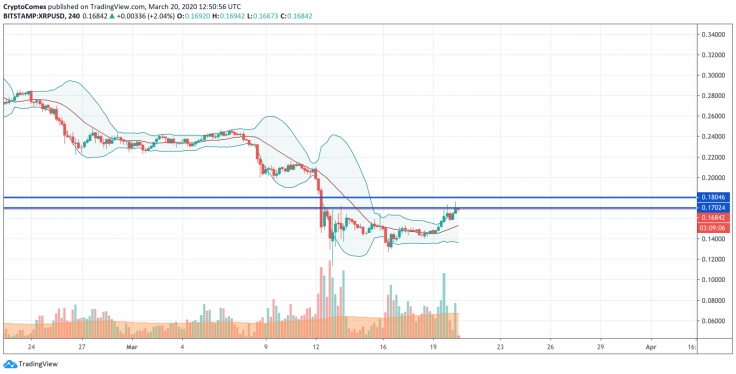 The XRP rate has increased by about 30% in the last five days. The short-term forecast is still rising as based on volume analysis, and everyone is always in high demand for XRP. However, XRP is about to settle in a sideways direction for the next few days to reinforce efforts for the continuing uptrend that had been foretold by the support line of the Bollinger Bands indicator. In this case, traders can expect XRP to trade between $ 0.17 – $ 0.18 in the short term.

On the daily chart, the picture is even more positive. The level of buying trading volume is absorbing the selling volume of the recent dump. Currently, XRP is forming a Triangle pattern at $ 0.20. If the buyer can sustain above $ 0.18, it will reach the resistance mentioned above the level in mid-April.

Ripple joins its European ODL corridor and a few other…

MoneyGram, Ripple’s biggest partner, is getting…