Bitcoin was roughly flat today, confined to a tight trading range as traders await a decisive breakout or price breakdown. For now, sentiment among crypto traders is still bearish, albeit less so compared with last week, according to the bitcoin Fear & Greed index. At the time of writing, the Bitcoin price is changing hands at $29,975. 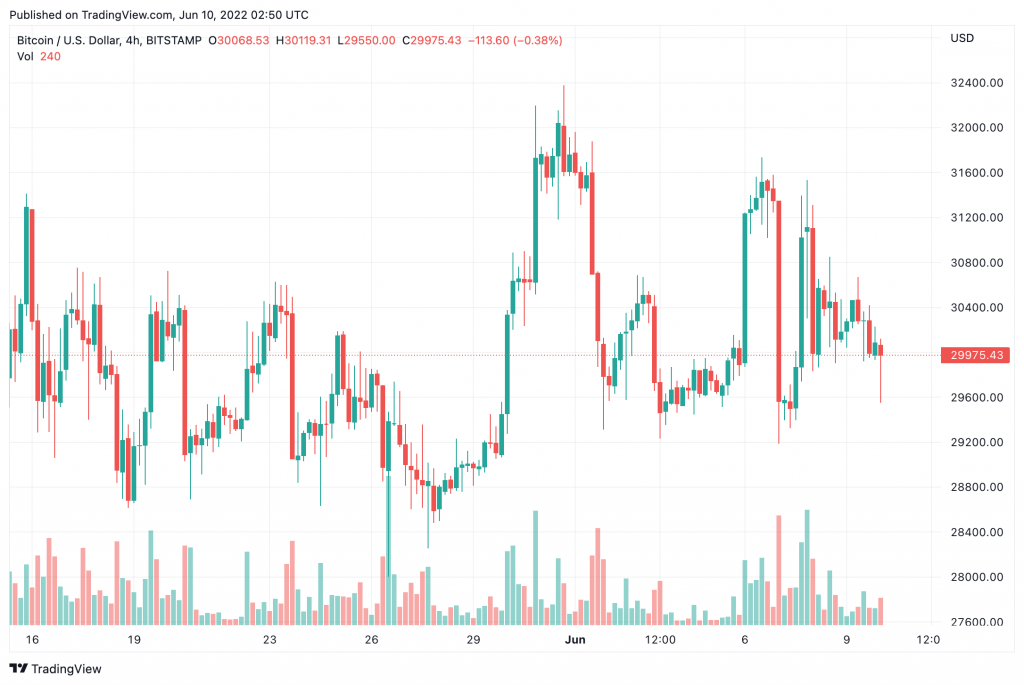 Bitcoin price rise with altcoins in the lead

The largest cryptocurrency by market capitalization rose a little, dropped some but always remained firmly entrenched around the $30,000 threshold, where it’s been camped for much of the past five weeks as investors awaited the latest Consumer Price Index (CPI) data on Friday.

The European Central Bank’s (ECB) announcement that it would begin raising interest rates next month sent first major European and U.S. indexes falling, with the latter taking a last-hour dive to post their biggest decline since mid-May. Technology companies suffered among the roughest batterings, with the tech-heavy Nasdaq dropping 2.7% and the tech component of the S&P 500 off about the same. The ECB announced it would hike rates a quarter of a point in July to combat inflation and that it would raise rates additionally later in the year.

The U.S. CPI is widely expected to show inflation still percolating well above 8%, its highest level in four decades. The U.S. Central Bank will likely raise interest rates another half-percentage point at its next meeting to match its most recent rate hike last month. Meanwhile, energy prices continued to hover around 2022 highs, with Brent crude oil, a benchmark of global energy markets, closing at about $123 per barrel, a roughly 60% increase from the start of the year.

Bitcoin was trading at about $30,000, roughly flat for the past 24 hours. Ether, the second-largest crypto by market cap, was changing hands just below the $1,800 level, about where it was perched a day ago and for the past few weeks.

” $BTC is moving sideways for a month while the leverage is piling up.”

Other major altcoins were mixed, with LTC off more than 3% at one point and ADA and CRO down about a percentage point. Among the winners, LINK continued its recent surge, rising over 6% at one point, while SOL was up more than 3%.

The overall cryptocurrency market cap stands at $1.233 trillion, and Bitcoin’s dominance rate is 46.3%.

The Terra implosion has reportedly attracted scrutiny from the U.S. SEC