A Sunday rally sent Bitcoin back above the $20,000 threshold it has occupied for much of the past month, but analysts remained unconvinced that the surge will have staying power. Bitcoin was recently trading at about $20,500, up over 8% over the previous 24 hours. At one point the previous day, the largest cryptocurrency by market capitalization had fallen below $17,800, its lowest level since mid-December 2017 when the Bitcoin price was near the peak of a bull run. That dip also fell below the high of that upcycle, disproving a theory that bitcoin would not breach a previous cycle’s high watermark. At the time of writing, BTC is changing hands at $19,870. 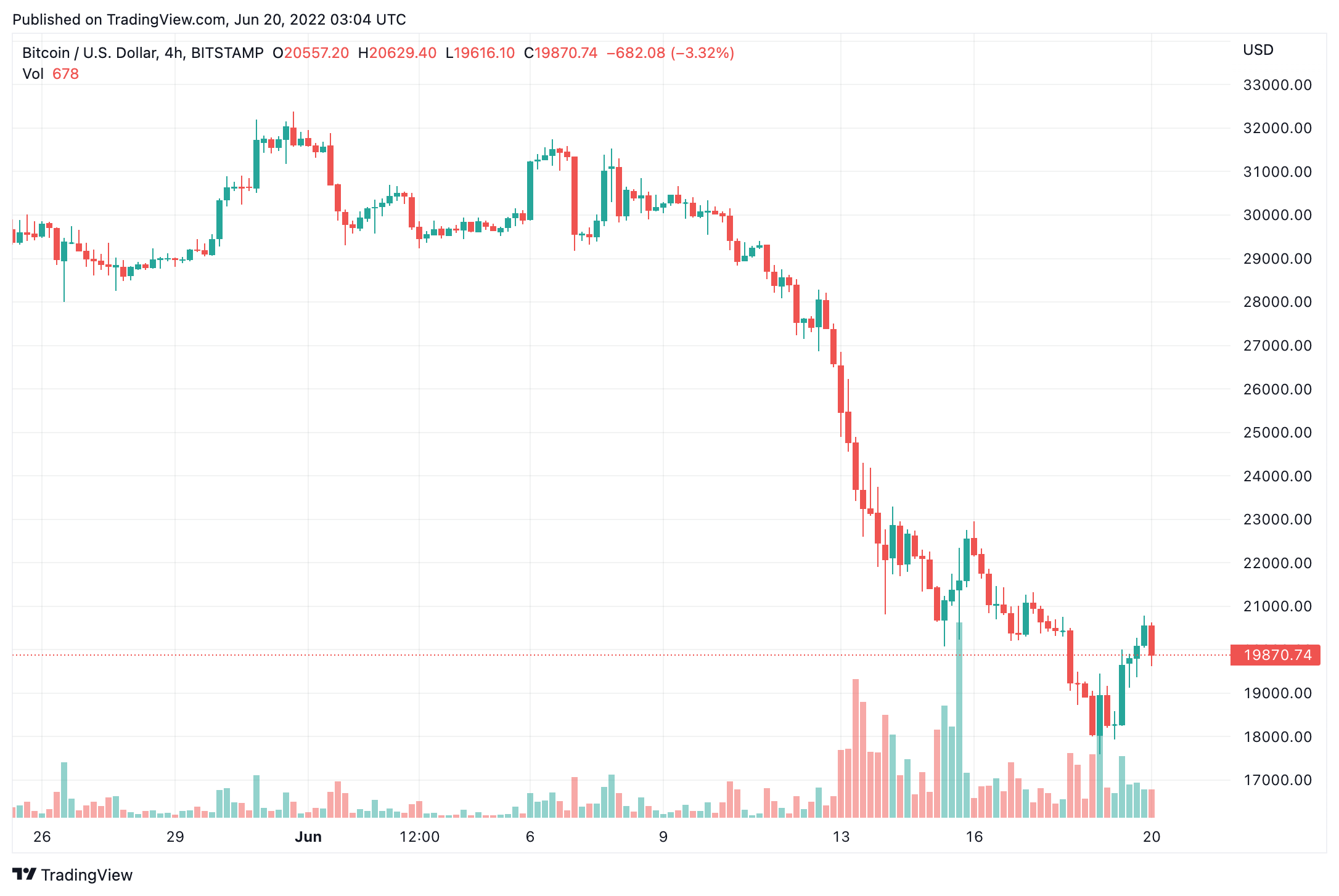 Bitcoin’s price recovered above the $20,000 mark Monday morning in Asia. The rally comes just one day after the largest cryptocurrency by market capitalization fell below $20,000, $17,708 – its lowest price since November 2020.

Bitcoin’s price surge reflects traders’ renewed appetite for risk, even as the market continues to digest the fallout surrounding crypto lending giant Celsius and crypto investment firm Three Arrows Capital. Early Saturday, the price of bitcoin plummeted below $20,000 and dipped as low as $17,601 later in the trading day. The drop also put bitcoin below the $19,783 all-time high it notched in December 2017, a level many crypto traders believed bitcoin would not fall below.

Ether, the second-largest cryptocurrency by market capitalization, enjoyed an even bigger rebound after falling as low as $880 on Saturday. As of press time, ETH was trading at $1,133, a 20% gain over the past 24 hours and a 29% gain from its Saturday low. On a year-to-date basis, bitcoin is still down 56%, while Ether has lost 69% of its value. The cryptocurrency market has been valued under $1 trillion for the seventh day, as chills of a “crypto winter” continued setting in. Markets remain on edge as the troubled hedge fund Three Arrows Capital reportedly had trading positions liquidated by some major crypto exchanges after failing to meet margin calls, and investor funds in cryptocurrency lender Celsius Network remain frozen.

Ether tumbling to an almost five-year low below $1,000 before rising late in the weekend. It recently changed hands at about $1,120, up more than 13% from the previous day. Other major altcoins were well into the green, with LTC and AXS up more than 17% at one point. The overall cryptocurrency market cap stands at $874 trillion, and Bitcoin’s dominance rate is 43.4%.

Terraform Labs has been slammed with a class-action lawsuit