Bitcoin price rally to over $35,000 in the past weeks because of Kimchi Premium or Mark Cuban running for president? 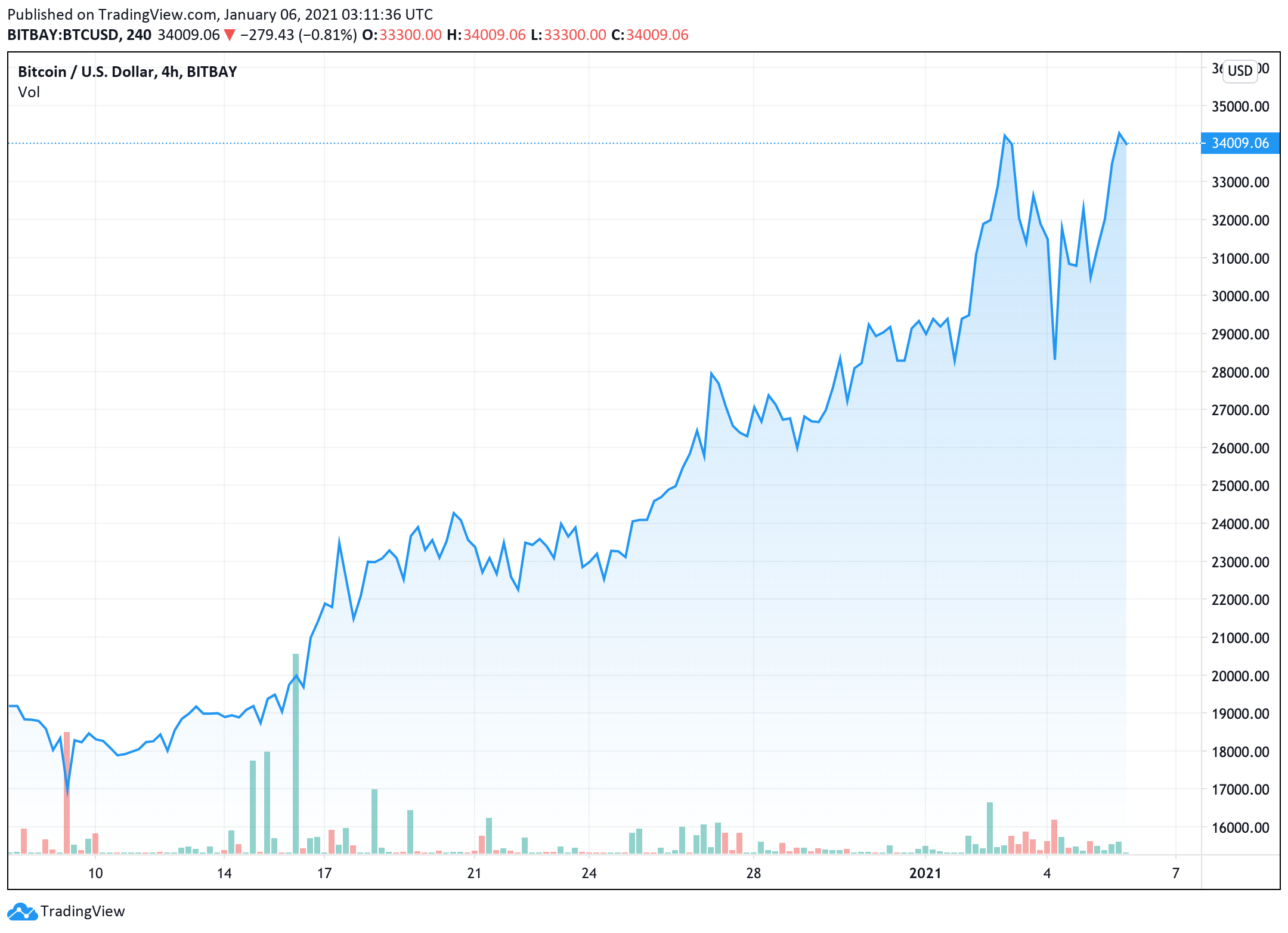 Bitcoin price increases a candle thanks to the green light

According to CoinMarketCap, trading volume over the past 24 hours was about $ 67.6 billion, down by nearly $ 20 billion. According to professional traders, Bitcoin’s price is aided by the new US policy. Specifically, banking policymakers in the United States (the Office of Monetary Control (OCC) under the US Treasury Department), recently sent a telegram explaining that financial institutions can use stablecoins, Simulate the value of real currencies such as USD to use for payment activities as well as participate in the blockchain system.

The above move by OCC has made Blockchain become a financial platform on par with systems like SWIFT, ACH, or FedWire.

Moreover, this move by Bitcoin could also come from billionaire Mark Cuban saying he will run as the US presidential candidate – under certain circumstances.

I’ll run if BTC gets to $1m AND we can get commitments to donate 350 BTC to the Treasury each of the 4 yrs so that we can give 1 satoshi to every citizen each yr, that they must hold for 10 years. How’s that sound 🙂 https://t.co/dW0e7FJ91m

Cuban has talked about Bitcoin several times over the past two years. At its core, Cuban’s overall stance on Bitcoin isn’t too far off from the industry’s outlook on the coin. Both Cuban and crypto industry experts view digital assets as a store of value similar to gold. However, Cuban has previously called for users to be simpler for the property, as well as mentioned several other points over the years. In contrast, crypto experts consider Bitcoin to be solving a lot of problems, rather than just acting as another store of value.

Bitcoin’s near-vertical rally to over $ 35,000 over the past weeks has yielded so-called “Kimchi Premium”

According to CryptoQuant, Bitcoin’s near-vertical rally to over $ 35,000 in the past weeks has brought back the so-called “Kimchi Premium”. Specifically, the Bitcoin effect on Korean exchanges during times of high volatility. Such moves largely stood out in early 2018, when premiums rose a staggering 54%. Premiums typically range around 1% on average. On Monday, however, it jumped to 5.5%, with the trend continuing on Tuesday morning.

“The Korean community has been pleasantly surprised by the recent uptick in Korean Premium. For most of 2020, there was actually a Korean discount of 1-3%.”

But the premium is not the result of Korean merchants wanting to pay a higher price for Bitcoin. Research from 2019 shows discrepancies arising due to the more dominant Bitcoin / Korean Won trading pair in Korea compared to Bitcoin / Dollar pair in other locations, and corresponding exchange rate difference between Won and US Dollar.

Typically, such opportunities (for other highly liquid Bitcoin/fiat pairs) are closed by arbitrage traders using this path: Buy the lower-priced asset, move to the exchange. trade where it sells higher, sell for fiat, and pocket the difference.

However, the tight capital controls in Korea prevented this from happening. “The Korean Won is a limited currency, which limits the ability to easily convert currencies and transfers across borders. Without a conversion path, the arbitrage loop cannot be closed by arbitrage traders, Jonathan Leong, founder of Taiwanese crypto exchange BTSE, said in a note to Decrypt. price.

But while the spread is difficult to close, some traders see the rising premium as an indicator of increased sentiment – and perhaps the price – for Bitcoin going forward.

“The 2017 bull run was marked by a constant kimchi premium throughout the rally, it particularly shot up during the local tops. Now is the first time since July 2019 that the premium is back up again going as high as 6.35% a few days back. This may mark a local top but a sustained premium for weeks would signal a raging bull market ahead.”

Meanwhile, the premium continues. As of press time, Bitcoin is selling for $ 31,267 on US-based crypto exchange Coinbase, but on South Korea’s Bithumb it is selling for $ 32,577 – a difference 4, first%. But like all the cool stuff, it’s hard to get.