Bitcoin price has just witnessed a sharp sell-off and brought the coin to the region of nearly $ 8,000, before finding support to have a slight rebound.

The move took place in three stages: for the first time, bringing BTC from $ 9,200 to $ 8,900, taking place on Saturday afternoon; second, priced from $ 8,900 to $ 8,700, until around midnight; and the latest and most significant has been going on for the past three hours.

Data from https://t.co/T3RTVBbJrD shows $92 million worth of bitcoin contracts were liquidated on BitMEX within a single hour, as bitcoin fell from $8,633 to $8,291 in less than 15 minutes. pic.twitter.com/VDvFdNH6Qr

This crazy sell-off caused Bitcoin to approach the “buy” area in the long term. This means that if the important price is kept above, BTC may break out in the coming days and weeks. Some other analysts agree with this statement when a veteran trader believes that this is already the bottom of the last sell.

At press time, the price of Bitcoin has dropped 9%, to $ 8,108 after having once been at the price of 8,800 as well as $ 9,200 in the past week. This negative move makes many investors quite pessimistic about the future of Bitcoin. However, there are still many reasons to support the hypothesis that Bitcoin will bounce from the bottom of $ 8,100.

Nick Patel, a prominent analyst, emphasized that to rebound in the short term, Bitcoin needs to quickly find the price of $ 8,400, when the closing of the day and week candles below this threshold is a signal for a long term bottom.

Why? SFPs of two important swing-lows, rejection from the 360MA and anyone thinking this is a break of a H&S neckline is trapped.

Target would be 9250, then new highs if support reclaimed up there. pic.twitter.com/1pDjnvJLLj

Patel was not the only one who believed in the prospect of a sharp rise afterward, when Dave the Wave, another famous analyst with extremely accurate prediction achievement, also asserted that we were approaching what he called the “buying zone.”

If the upside is indeed triggered after this critical level, the recent bottom will likely be a long-term bounce for Bitcoin.

In the buy zone. Full 50% retracement of the parabolic rise. Anyone buying if yet to build a position? pic.twitter.com/fAcvpDCqrk

Ponzi PlusToken transferred more than 13,000 BTC a day before this shock absorber occurred. According to trader Kevin Svenson, this is not a typical sell-off as a single whale will most likely attack the market. He stated that PlusToken tries to counteract all Bitcoin price increases.

They also did something similar after #BTC crossed above 10,000 this year.

They are slamming the market with sell orders.

Essentially we have a giant whale unloading after every move up.

While the PlusToken idea affecting the cryptocurrency market may sound bizarre, Chainalysis proved this argument in December 2019. They have linked the $ 3 billion scam to each Bitcoin price crash in the second half of 2019. Notably, the Bitcoin price peaked in 2019 shortly after Chinese police raided and broke down this project.

Chainalysis estimated that PlusToken had 20,000 more BTC to sell, which might mean that this nightmare might be already over for Bitcoin once the fraudsters cash in all their ill-gotten coins. 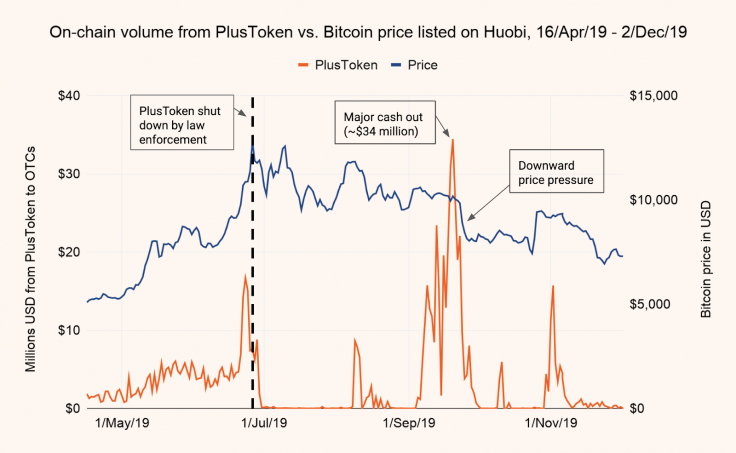 At press time, the price of Ethereum is falling by more than 15% at its current price of $ 201, marking a notable decline from the daily high of $ 252 that was set yesterday just before the above sell-off Bitcoin leads the whole market.

In the time since touching these highs, ETH has been caught up in a strong downtrend without showing signs of surrender at any time, with each attempt to bounce up, resulting in a solid rejection that makes Catalyze additional disadvantages.

Ethereum has just dipped below a “do or die” support level that had previously been supporting its price action, with a sustained break below this level opening the gates for serious downside. This movement is also coming as multiple fundamental indicators begin flashing bearish signs, suggesting a change to sub- $ 200 is imminent.

Analyst Jacob Canfield talked about the importance of this support in a tweet just before ETH dropped below $ 220:

#Ethereum sitting on a do-or-die level for its current trend.

A break here could see sub $200 $ETH and lower. pic.twitter.com/I4HCZzFEgP

XRP is no better than ETH. Every year, the price of XRP has increased by about 25%, from $ 0.185 to $ 0.233. However, compared to Bitcoin, it has dropped by 2.5% since January 1. In the first half of February, when significant altcoins like Ethereum and Bitcoin Cash outperformed Bitcoin, XRP rose to $ 0.346. It has recorded an 80% increase from its annual opening to February 15, representing the most substantial rebound since May 2019. However, when Bitcoin price resolutely rejected the resistance of $ 10,500, the entire altcoin market has fallen to low support.

In less than two weeks since XRP reached an annual high, it has fallen by more than 35%. The lackluster performance of XRP over the past three weeks is likely to be more technical than fundamental.

Since the last quarter of 2019, Ripple has significantly reduced the sale of XRP. Ripple’s XRP sales have fallen 78% based on Ripple’s Q4 2019 report, indicating that the market has seen less selling pressure imposed by XRP sales.

With Moneygram intensifying its efforts to use XRP more actively to handle remittance payments in Mexico and expanding the XRP ecosystem in Asia, it can be said that the fundamentals have intensified since the year. 2019. As a result, the slowdown in the XRP price trend and a 35% decline in just 11 days is mainly due to the significant change in sentiment in the cryptocurrency market. 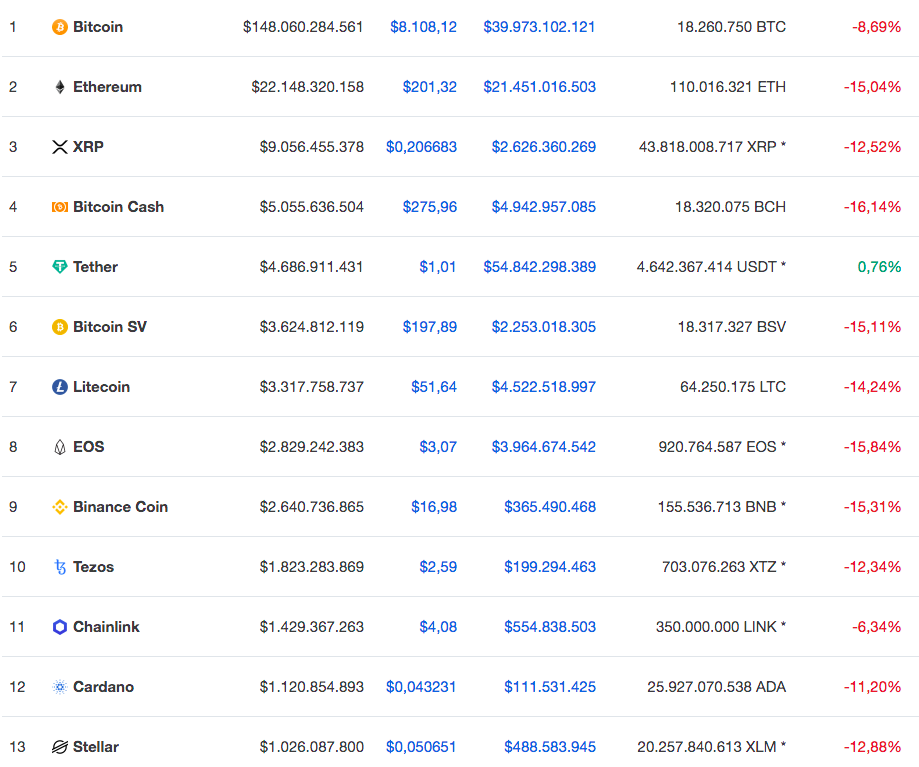 According to data from CoinMarketCap, Bitcoin Dominance began to rebound after falling to a low of 62% in mid-February. The decline of altcoins in the top 10, such as ETH and XRP mentioned above, is also Bitcoin Cash, Bitcoin SV, Litecoin, EOS, Binance Coin, and Tezos with a nearly 15% decline in the past 24 hours.

The plunge of major Altcoins indicates that investors are heading towards Bitcoin, stablecoins, and fiat as the uncertainty in the cryptocurrency market grows.