Bitcoin price could move higher in the coming sessions based on its similarity to its price action with the Fractal level from June 2020. The fractal boasts about a support level near $ 9,000 that stood firm between June 25 and July 21 this year. Traders attempted to break below the floor for 26-days straight but failed every time owing to a higher buying sentiment around it.

Bitcoin price is looking to repeat the June 2020 fractal

Logarithmic Moving Average Convergence Divergence (LMACD) is a technical indicator that shows the relationship between two moving averages of an asset’s price. Meanwhile, the term ‘Squeeze’ points towards a big breakout move, based on Bitcoin’s historical reaction to the growing proximity between Signal Line and MACD output.

The last occurrence of LMACD Squeeze coincided with Bitcoin’s consolidation above the $9,000 level. Later, the cryptocurrency underwent a massive breakout move towards $10,500.

TradingShot noted Bitcoin in a similar upside setup as the cryptocurrency attempted to maintain a price floor above $10,000. At the same time, it logged a similar LMACD Squeeze scenario, leading the chartist to expect a lengthy bull run ahead.

An analyst from TradingShot stated:

“That is the perfect example of strong accumulation if you ask me. So if we see something similar this time around, you probably know what it would mean.”

The statement also appeared as BTC/USD struggled to break above a technical price ceiling near $10,400 despite repeated attempts. The pair on Sunday briefly closed above $10,500 only to pare those gains entirely. 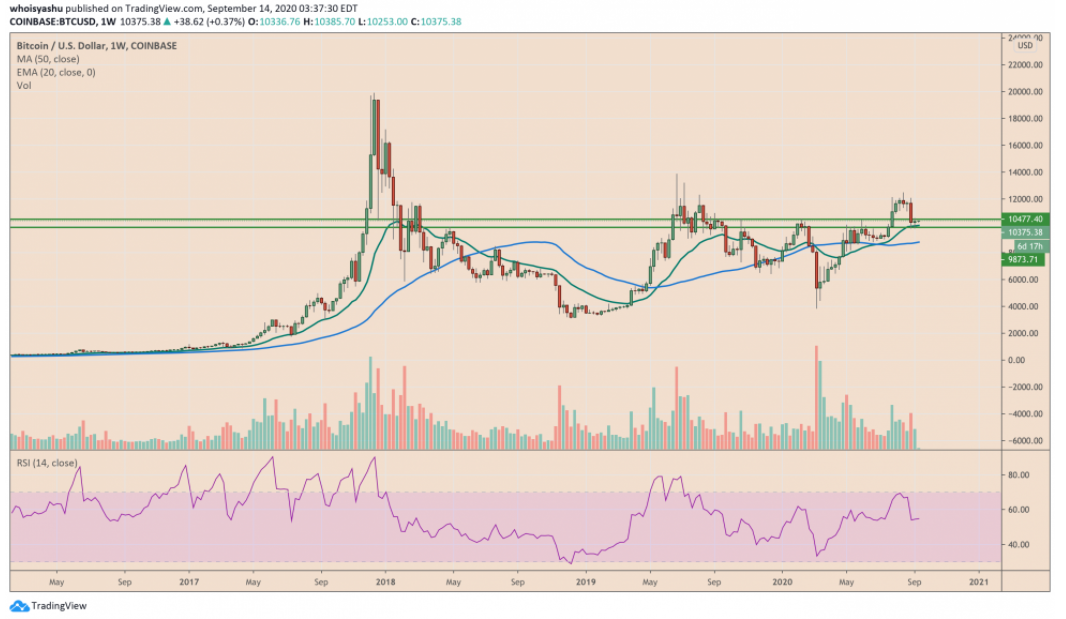 Some observers decided to watch macro fundamentals to anticipate Bitcoin’s next moves. Tyler Winklevoss, the co-founder of US-based Gemini crypto exchange, cited the European Central Bank’s monetary policy meeting on Thursday to make a bullish case for the cryptocurrency.

“The European Central Bank’s refinancing rate is 0% and its deposit rate is -.5%. This means it is free to borrow money, but actually costs you money to save. This is both a potent recipe for inflation and a powerful advertisement for Bitcoin.”

Meanwhile, Kevin Svenson expressed his concerns over a bearish pullback in the US stock market. The analyst stated that a further correction in the S&P 500 would put Bitcoin to lower levels.

Bitcoin and the S&P 500 rose in tandem from their mid-March lows, their rallies led by the US Federal Reserve’s relentless bond-buying and lower interest rates.

According to Bitcoin Block Bot, the whale moved the coins to two separate addresses. An unknown wallet with a total of one transaction received 2,730 BTC. Another wallet that received 8,500 BTC also has a record of one transaction. 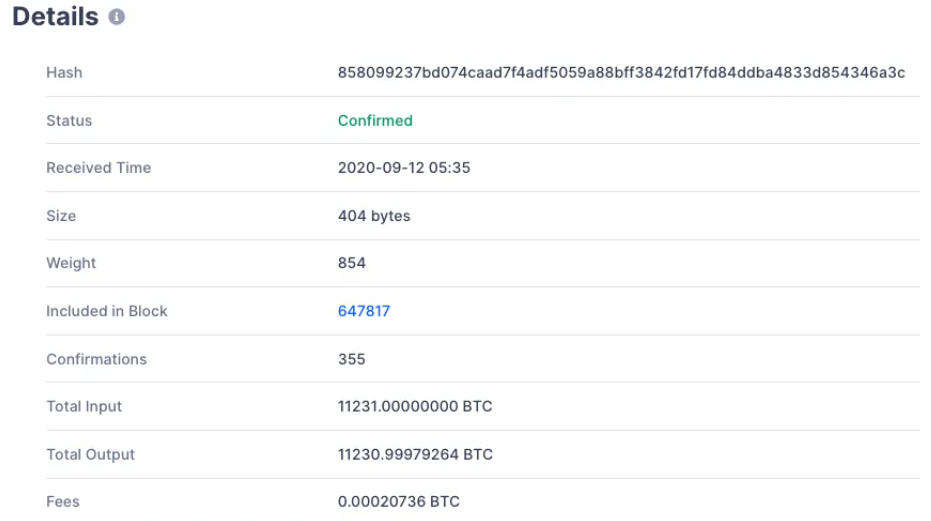 BitInfoCharts shows that the whale created the original wallet on July 14th. The wallet started receiving substantial amounts of BTC on July 23rd on the way to becoming the 28th wealthiest Bitcoin wallet in existence on September 11th.

The whale in question could be a custodian or institution managing cryptocurrencies on behalf of its clients. The big-time crypto holder could also be moving BTC across multiple addresses for security purposes.

However, none of the addresses involved have known links to a company in the crypto industry. The BTC has not moved to any known crypto exchange wallets, where it could be traded and sold in the open market.