Bitcoin kickstarted the week with an incredible recovery rally, negating a considerable portion of its losses from the previous weekly session against a downside correction in US bond yields. Nevertheless, BTC’s intraday bull run failed to garner further higher bids on Tuesday. A sell-off at the local top ensued due to profit-taking sentiment, pushing the Bitcoin price lower by as much as 3.72% to $48,380. Bitcoin was still up 7.5% on a week-to-date timeframe. 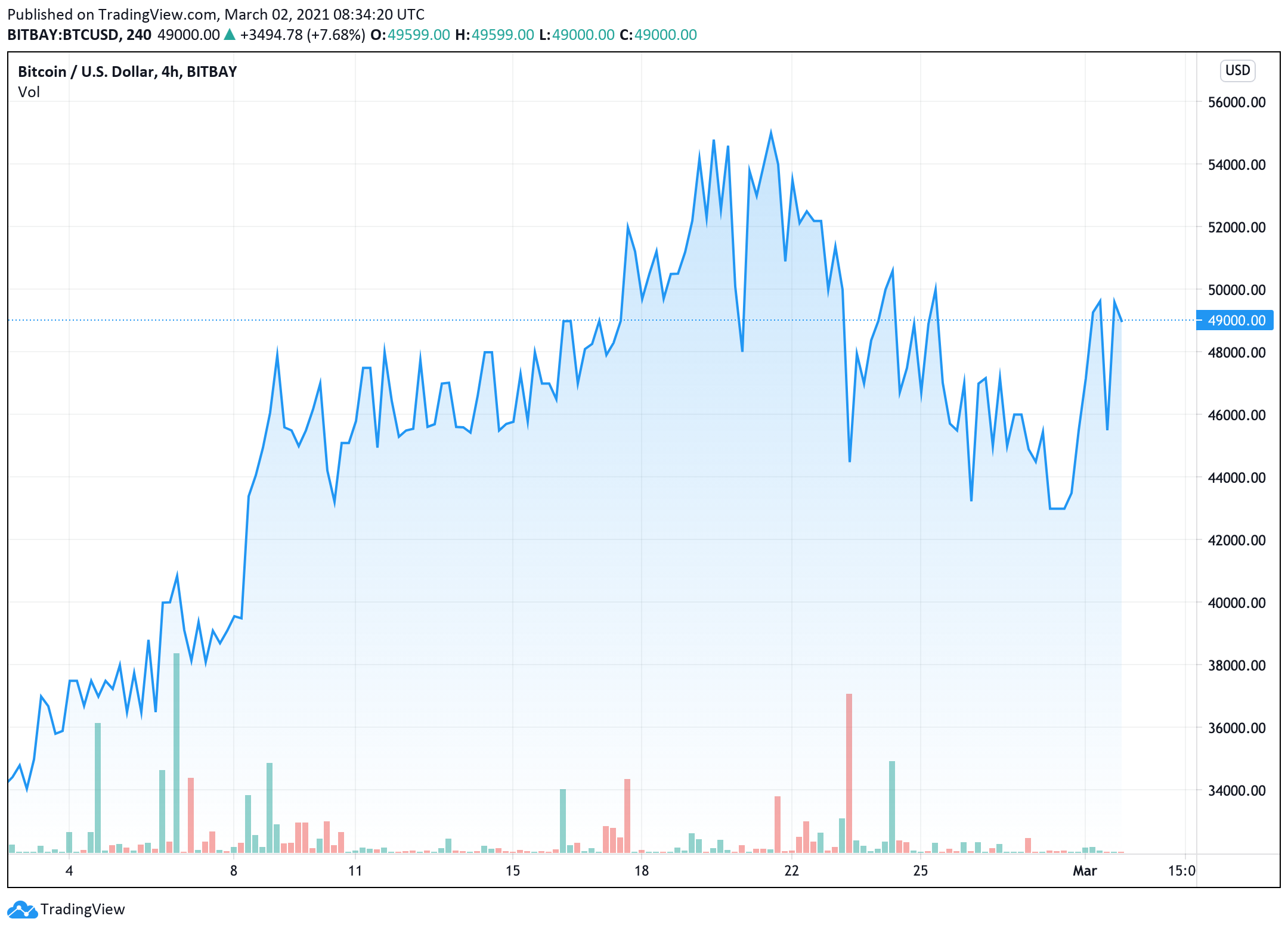 Part of the cryptocurrency’s gains also received a boost from Citi’s latest report on cryptocurrencies. The investment bank concluded that Bitcoin could become a currency of choice for international trade. Nonetheless, the upbeat projections did little in maintaining the asset’s intraday bias.

Bitcoin’s downside move Tuesday appeared in the entire cryptocurrency market, with top tokens like Ethereum and Binance Coin each tailing Bitcoin to its intraday losses. Overall, the crypto market lost about $23 billion during the Asia session, setting the forthcoming periods on alert mode about potential declines.

Bitcoin’s 21% price decline last week and its recovery on Monday appeared in response to the ongoing turbulence in government-bond markets. Global 10-year interest rates rose on optimistic economic growth forecasts, putting pressure on assets that performed well against falling yields in 2020. As a result, bitcoin plunged alongside tech stocks.

But on Monday, the yields stabilized, providing the cryptocurrency a break from its corrective moves. It received a further boost after Australia’s central bank responded to rising bond yields by doubling its Treasury purchases. Interest rates move inversely to bond prices.

Analysts noted the US Federal Reserve would need to take a similar call. Crypto economist Ben Lilly said in his weekly newsletter that rising yields would push the cost-to-service debt higher, which is very troubling in an economy that’s still operating at less than full capacity in light of COVID.

“It’s why J-Pow and the Federal Reserve can’t sit idle,” Mr. Lilly added. “Let me rephrase that… It’s why they haven’t sat idle. They are already acting in the markets by purchasing U.S. debt (bonds).”

Bulls have long perceived central banks’ intervention into the bond markets as optimistic for Bitcoin. As they rake up Treasurys, they effectively push the yields on them lower, making them less attractive for other investors. As a result, the money starts flowing into riskier assets.

While the news about Goldman Sachs restarting its cryptocurrency was met with a flurry of excitement, veteran trader Peter Brandt recently offered his sobering take, claiming that the bank’s entry into any market is usually a bad omen.

Us old-timers have learned that whenever @GoldmanSachs enters a market niche it is time to guard your money. $BTC pic.twitter.com/tHfRkS4igb

The major Wall Street player initially intended to set up a trading desk in late 2017. As Brandt highlights on his chart, this also coincided with Bitcoin reaching the apex of the previous bull run.

The chartist clarifies that he doesn’t necessarily think that Bitcoin is going to top out here, but Goldman’s foray doesn’t mean that it’s bullish on the top cryptocurrency:

“Most ppl assumed my implication is that $BTC has topped/is topping. This Tweet was intended to point out that Goldman’s involvement in any/all markets means the firm has figured out a new angle to take skin from their clients.”

Last month, Brandt tweeted that Bitcoin was in the middle of its third parabolic advance.

U.S. citizens can now purchase Dogecoin from ATMs in 45 of the country’s 50 states

An effective way to protect against theft of cryptocurrency with mixer

Despite the ongoing legal battle with the Securities…

Despite the ongoing legal battle with the Securities Exchange Commission, Ripple has reported that XRP sales in Q1…
Bitcoin News