Bitcoin price has embarked on a strong rally over the past few days that has brought from the $9,800 lows to $11,500. This is an over 15% rally that has brought the coin above crucial technical levels.

Critical BTC buy signal is about to appear, how’s about Bitcoin price?

Bitcoin is set to continue its ascent after reaching a high of $11,500 on Friday evening, according to crypto trader CryptoNite. He shared the chart below on October 11th, which shows that Bitcoin is forming a number of critical signals on its one-day chart. These include but are not limited to, the one-day MACD about to cross bullishly and a momentum indicator printing a buy signal.

This is relevant because the last time this signal appeared was in late July, prior to the $3,000 move that brought the asset above $12,000. There are fundamental trends supporting the expectations for upside in the cryptocurrency market.

Just last week, Square announced that it had deployed $50 million from its balance sheet to buy Bitcoin. Square is an international fintech company that has a valuation of approximately $80 billion. $50 million represented 1% of the firm’s total assets.

Square released a whitepaper on how it managed to complete this purchase, then store the cryptocurrency. It also discussed why it bought Bitcoin, mentioning the ongoing macro trends as reasons to own this asset.

Tyler Winklevoss of Gemini believes that this $50 million BTC purchase is the start of a wider trend of corporations investing in the asset. He went as far as to say that he thinks there will be a wave of capital, a tsunami in fact, that will enter Bitcoin over time.

“First, it was @michael_saylor and publicly traded @MicroStrategy buying $425million of #Bitcoin. Today, it is @jack and @square buying $50million of bitcoin. Tomorrow, it will be another visionary leader, and another, and another…the tsunami is coming.”

First, it was @michael_saylor and publicly traded @MicroStrategy buying $425million of #Bitcoin. Today, it is @jack and @square buying $50million of bitcoin. Tomorrow, it will be another visionary leader, and another, and another…the tsunami is coming https://t.co/MjF5z6u7ha

In the past, Winklevoss has said that Bitcoin’s fundamentals are better than ever due to macroeconomic trends. He specifically cites the ongoing trend of money printing, which is driving the intrinsic value of a scarce and digital asset like BTC to the upside.

Bitcoin has crossed into bullish territory with the biggest weekly gain in 2.5 months

Bitcoin climbed nearly 6.6% in the seven days to Oct. 11, capping its biggest single-week percentage rise since the last week of July. The flipping of the stiff resistance of $11,200 (Sept. 18) into support is bullish. So far, however, the follow-through to the breakout has been poor: The cryptocurrency is currently trading in the red near $11,250, having printed highs near $11,500 over the weekend. 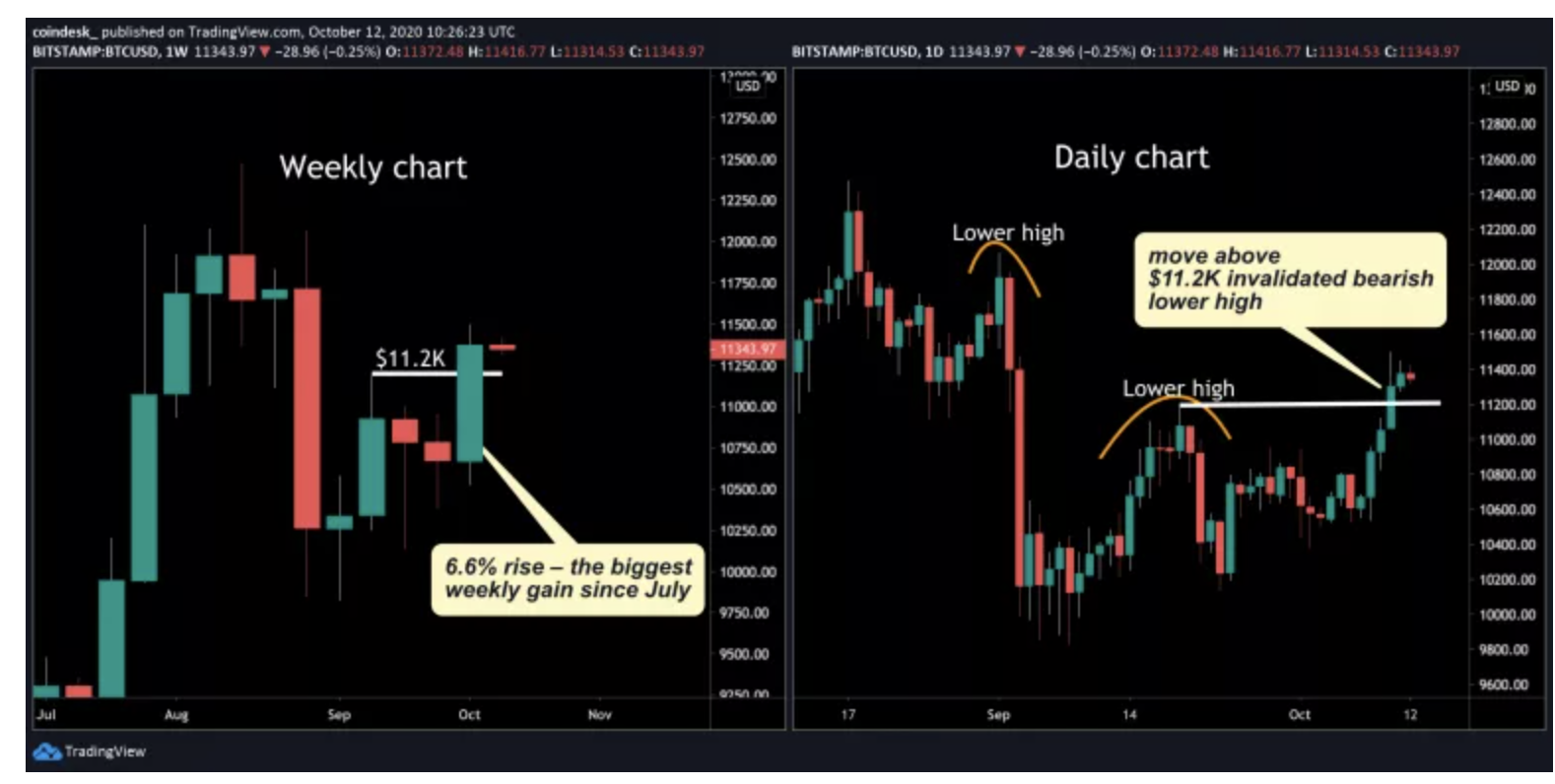 However, the pullback may be short-lived, miner outflows suggest. Last week, bitcoin miners sold more than they generated and ran down inventory by around 1,000 BTC.

While the path of least resistance for bitcoin appears to be on the higher side, a move to the next major resistance at $12,000 may remain elusive if the resurgence of the coronavirus cases across Europe, tanks global equities and boosts haven demand for the U.S. dollar.

Filecoin mainnet will likely launch this week, which has been gaining momentum mostly in China