Bitcoin price holds steady near $23K for another day; Ether remains above $1,600

In a performance similar to the one from the weekend that showed new investor optimism, the Bitcoin price briefly reached the stratospheric peak of $23,000 before falling just below this mark. BTC recently traded at $22,968, up almost a percentage point over the past 24 hours. 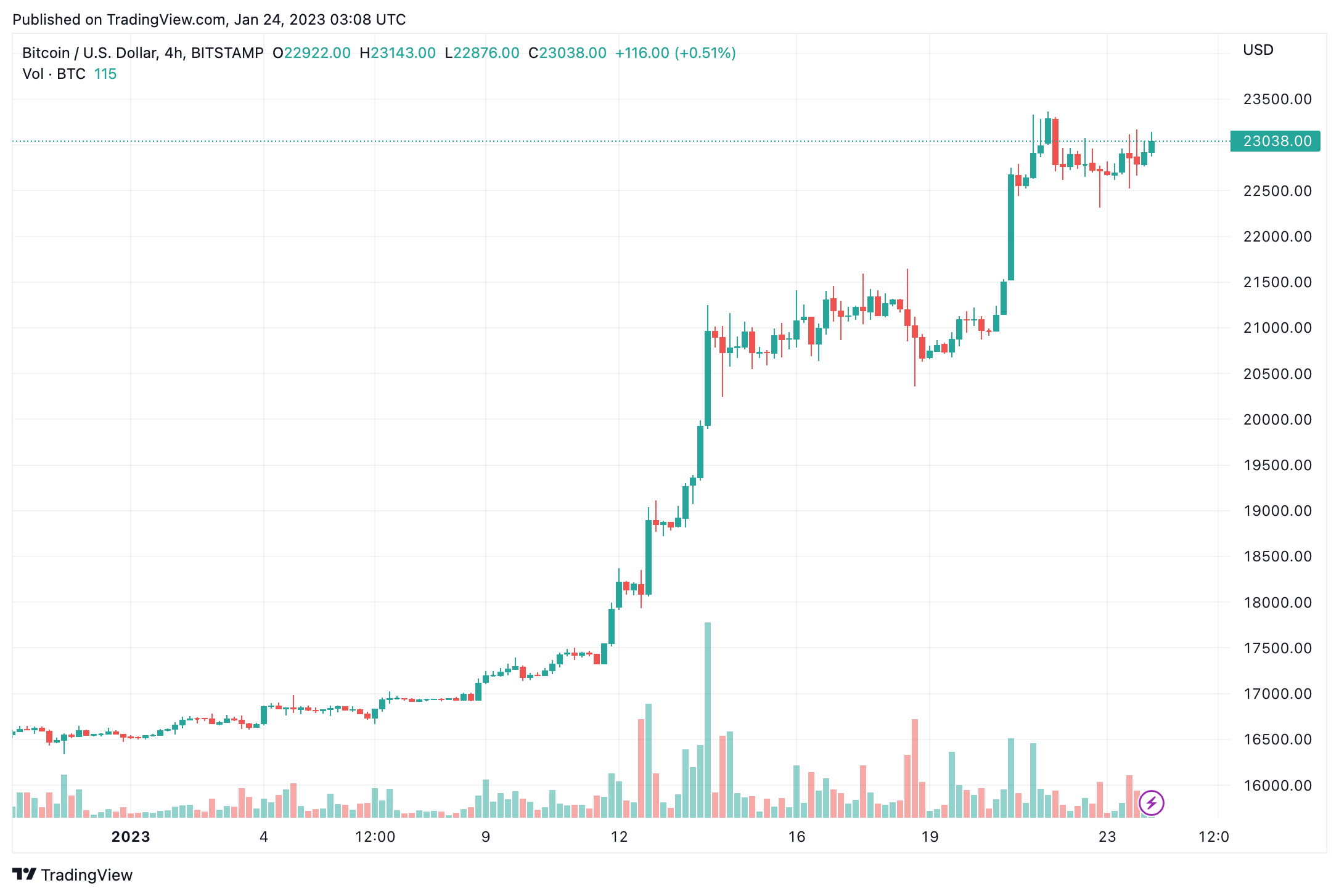 The largest cryptocurrency by market capitalization, BTC, has increased more than 35% since the beginning of the year despite clear indications that prices are falling without the economy entering a deep recession.

Ether experienced similar Monday ups and downs, but it kept trading comfortably above $1,600, roughly flat simultaneously. Other significant cryptocurrencies were uneven, with AXS, the governance token of gaming platform Axie Infinity, falling more than 12% and AVAX, the token of base layer protocol Avalanche, rising more than 4% and 5%, respectively. AXS increased by more than 40%.

After launching a new feature to the XRP Ledger network known as CheckCashMakesTrustLine, XRP increased 5.9% to trade at $0.42, a weekly gain of 9.8%. The U.S. Securities and Exchange Commission(SEC) case against Ripple is expected to be resolved in the first half of this year, according to executives at Ripple Labs, the business whose payment network is powered by XRP.

The unprecedented purchase of a non-fungible token (NFT) on the embryonic XRPL NFT market also contributed to the XRP price increase. Developer Wietse Wind constructed the NFT without any images or metadata to test the network, but it was nonetheless purchased.

Following the successful launch of the network’s XCM “cross-consensus messaging” version 3, which is said to boost cross-chain communication and create the foundation for NFTs, Polkadot increased 5.9% to $6.57, a weekly gain of 13.1%. Over the past 24 hours, the overall market value of cryptocurrencies increased by 1.5% to $1.05 trillion, and trading volume increased by 6.6% to $56.3 billion.

Strong performances from companies including computer behemoth Apple Inc., which jumped 2.4% to $141.11, and chipmaker NVIDIA Inc., which increased 7.6% to $191.93, contributed to the advances in the tech-heavy Nasdaq. This week, several significant earnings announcements from companies like Visa Inc., Microsoft Corp., and Tesla Inc. are anticipated.

Before their meeting on January 31–February 1, when the U.S. Federal Reserve will decide the next move on interest rates, members will be in a so-called blackout period, when experts from CME Group forecast a 99.8% chance of a rise of 25 basis points. Durable goods orders and consumer confidence are two other upcoming U.S. economic indicators that could impact that choice.