Bitcoin price has not been able to cross the $ 55,000 resistance level while the red has spread rapidly to the market 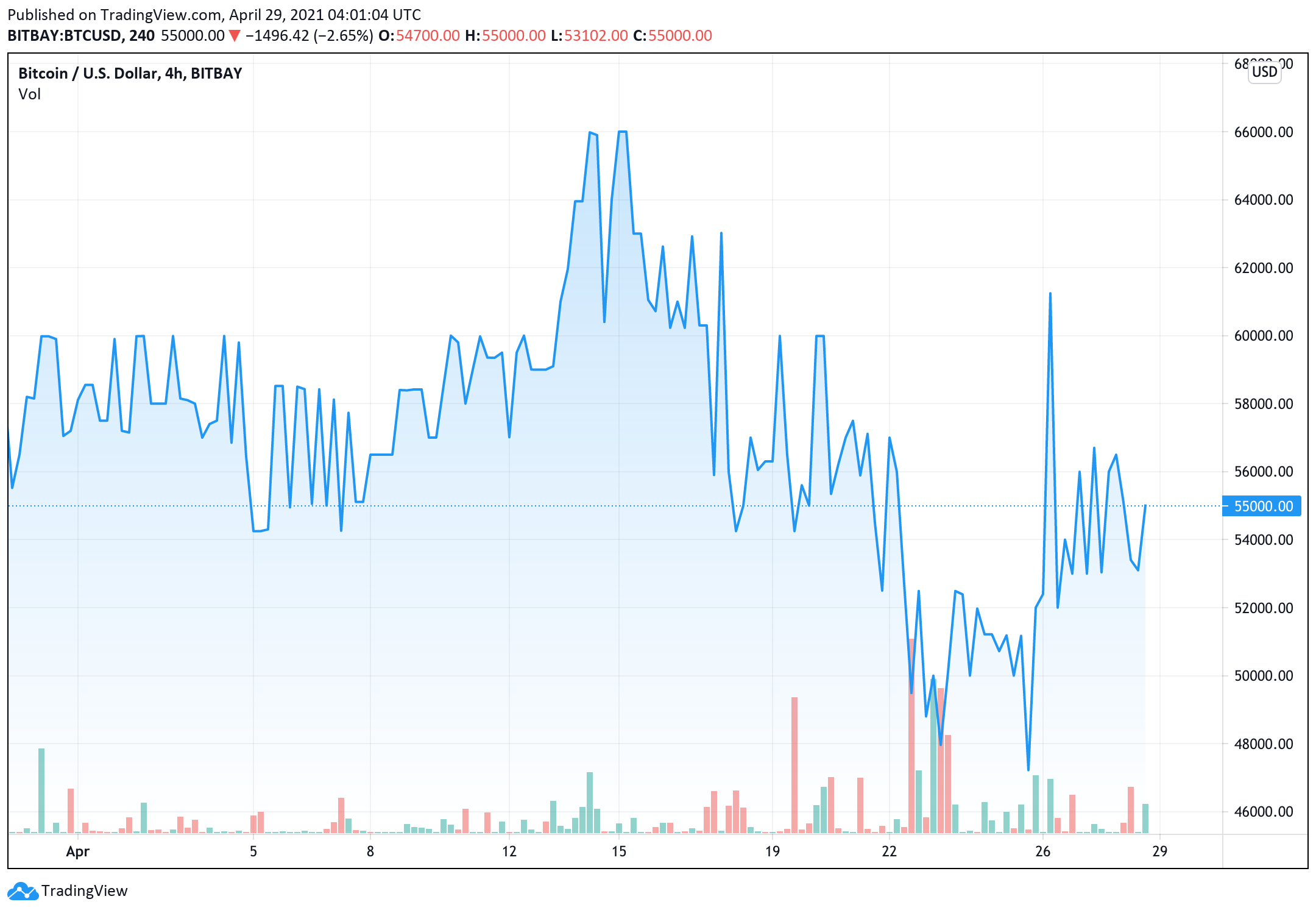 Bitcoin price has not been able to cross the $ 55,000 resistance level while the red has spread rapidly to the market

Bitcoin continues to struggle again after its recent bearish correction. The price of the cryptocurrency against the US dollar has barely changed over the past 24 hours as the bears try to limit the action below $ 55,000.

Buyers will need to regain the upper hand to prevent another drop. The technical outlook on the 4-hour chart certainly shows that BTC / USD has been thoroughly prepared, but the advantage is with the bulls.

While the price is likely to be corrected lower, some analysts are predicting new gains for Bitcoin in the short term.

According to Raoul Pal, founder, and CEO of Global Macro Investor, Bitcoin is being oversold and the weekly RSI is printing levels last seen during the 2017 bull run. Corrections are being witnessed that will help refresh the bull market.

The weekly RSI is close to the levels that we saw in corrections in the first part of the 2017 bull run, before bitcoin hit hyperspace. These are the pauses that refresh a bull market. pic.twitter.com/gWlivsebPv

Another analyst has pointed to the Stock to Flow (S2F) model, which shows that Bitcoin has yet to peak. According to Rekt Capital, Bitcoin previously peaked whenever the price moved above the S2F line. He predicts a new uptrend for BTC / USD as the price hits a bottom.

S2F line will begin to flatten out in early May

So once #Bitcoin bottoms on this correction…

The next uptrend will likely be the one to perform that upside deviationhttps://t.co/mRRRDml9z8 pic.twitter.com/BU4RDhWEbz

The bulls tried to keep the BTC price above the main descending trend line and Fib level of 0.618. The MACD is still above its signal line, although it is weakening and the RSI above 50 shows the advantage of the buyers.

The market is also being negatively affected by the news that the US can raise the capital surplus tax to double for those earning $ 1 million or more. The purpose of the tax increase is to raise $ 1,000 billion for social security programs such as education, child care, and pay workers’ vacation. This can affect crypto investors.

In addition, the shutdown of two Turkish crypto exchanges last week made sentiment go down in the context of digital currency being warned of bubbles. Even Tesla CEO Elon Musk’s encouraging statement on Twitter about the future of cryptocurrencies didn’t help much.

Even so, in the medium term, Bitcoin’s performance is quite good. Since the beginning of the year, this amount has increased 70% thanks to the support of the famous investor and the participation of large organizations such as Goldman Sachs Group, Bank of New York Mellon.

Back to the market movement, this morning there was a large differentiation between the leading groups. The group increased including Ethereum up 3.37%, Cardano up 1.5%, Dogecoin up 18.6%, Uniswap up 7%, Bitcoin Cash up 1.38%. In the opposite direction, XRP decreased by 3.5%, Binance Coin decreased by 2.4%, Polkadot decreased by 2.8%, Liteocoin decreased by 0.4%.

Total market capitalization was recorded early today at $ 2,080 billion, up 0.2%.

Bitcoin addiction in Korea is at an alarming level, the lines between investing and gambling are becoming increasingly blurred