Bitcoin price had risen sharply in recent weeks, hitting $ 12,200 at the end of the week before buyers flocked in. Analysts say that the crypto market still has a higher chance of going up due to technical indicators. And more notably, the dollar has been in sharp decline, and the global reserve is losing its crown to the likes of Bitcoin (or the Yuan).

Raoul Pal, the CEO of Real Vision and a former Wall Street member, recently spoke of support for Bitcoin. He stressed that while gold is doing well as a hedge against printing fiat money, Bitcoin could have been better.

In fact, only one asset has offset the growth of the G4 balance sheet. Its not stocks, not bonds, not commodities, not credit, not precious metals, not miners. Only one asset massively outperformed over almost any time horizon.

“My conviction levels in bitcoin rise every day. I’m already irresponsibly long. I am now thinking it may not be even worth owning any other asset as long-term asset allocation, but that’s a story for another day (I’m still thinking through this).”

Pal is far from the only Bitcoin bull from Wall Street.

“Bitcoin still has a lot of retail interest in it. A lot of that retail interest shifted to the story stocks, to the tech stocks, because they were just more fun … Yesterday you saw a lot of money shift back over to gold and Bitcoin.”

There are also other players like Paul Tudor Jones, a billionaire hedge fund manager. While Jones allocates most of his time to traditional investments, in May, he announced that he is openly and professionally accepting stakes in Bitcoin futures.

“I am not an advocate of Bitcoin ownership in isolation, but do recognize its potential in a period when we have the most unorthodox economic policies in modern history. So, we need to adapt our investment strategy. We have updated the Tudor BVI offering memoranda to disclose that we may trade Bitcoin futures for Tudor BVI.”

He cites the central banks’ ongoing loosening policies, calling them “unorthodox.” Jones added that he thinks Bitcoin will be “the fastest horse in the race” in a world where fiat is being devalued at seemingly record rates.

When dollar sentiment fell this low in the past, it often triggered a sharp reversal in the currency

All markets are denominated in USD as the US dollar acts as the global reserve currency. This is the base currency pair on which all exchange rates are based and is the most dominant currency in terms of the overall trading volume. Its strength is unprecedented but increasingly fades away due to pandemic, political tensions, and unrest across the country.

Analysts have called for the dollar index to fall by up to 35% against other major national currencies. These assets include Yuan, euros, gold, and even Bitcoin.

So far, the stimulus to pump money into the market has been correct: the dollar is drowning by its printer. But the negative sentiment may have outstripped the decline, sending the index hit a low that in the past has caused a significant reversal. 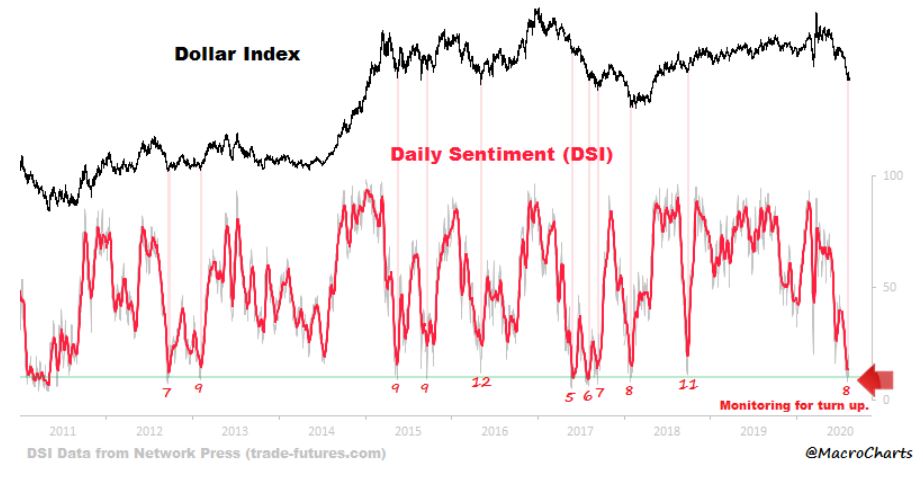 Dollar weakness has allowed gold to reach an all-time high, competing currencies to rise in price, and Bitcoin to break $ 10,000. But what happens when the dollar rebounds?

Bitcoin has been tracking almost 1: 1 against the inverse DXY dollar currency index chart. The correlation is bizarre, showing the significant impact that the dollar’s weakness directly has on Bitcoin’s strength. Gold shows a similar, though not very clear, correlation. Other altcoins like Ethereum rose even more strongly against the USD.

But the correlation also shows that the charts of the two assets start to reverse after a strong move in one direction. As the saying goes up, what goes up must go down. And when the dollar turns around, Bitcoin and the rest of the cryptocurrency could fall apart by the dangerous blow caused by the USD.

With more stimulus testing and the results of the final stimulus package on the dollar shown through investment ROI, the dollar will fall even more in the coming days.

Inflation takes time and will last for years, not weeks or months. Hence, any dollar reversal will be short-lived and precious metals, gold and silver, and cryptocurrencies like Bitcoin will continue to grow in the coming years.