There is quite a bit of opinion that Bitcoin price is still motivated enough to try a long rally towards $ 14,000 as the BTC / USD trading pair has had a lot of support near $ 10,500 and keeping BTC above. This will make the momentum smoother.

Jacob Canfield, Founder of Signal Profits, placed Bitcoin on a Fibonacci Retracement graph, a set of horizontal levels that indicates where the supports and resistances are most likely to occur. He noted that BTCUSD had ample of support near the $ 10,500 level, adding that holding above it would ensure a smooth upside move towards $ 14,000.

Yesterday’s drop was possibly price suppression and re-accumulation of longs and a bear trap on shorts to fuel the next push up pic.twitter.com/9UEs7T5Toe 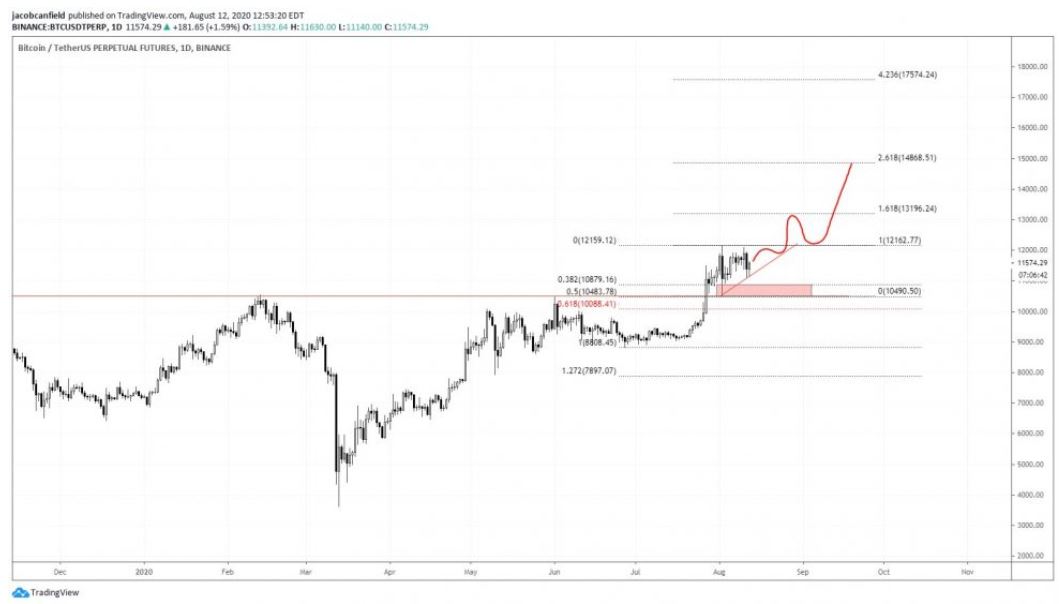 The statement followed Bitcoin’s third failed attempt to break above $ 12,000. Last week, the cryptocurrency fell by more than $ 1,500 within minutes after testing the said level. And this week, it almost vast the same pullback move, albeit falling less vigorously than the last time.

Josh Rager, a market analyst, focusing on cryptocurrencies, said BTCUSD needs to surpass $ 11,900 before thinking of reaching the excess levels. However, like Canfield, it also acknowledges the strength of $ 10,500 in keeping the pair’s uptrend intact.

$ 10,500 turns into support after acting as stiff resistance for almost a year. Bitcoin repeatedly failed to climb above it, confirming higher selling pressure. Just for today, selling pressure has turned into buying influence.

That makes $ 10,500 the frontier level for Bitcoin’s short-term bearish/bullish trend determination. A break below this level will make it a level of resistance, which could create an additional barrier between the cryptocurrency and its $ 14,000 price target.

Regardless of the bearish technical indicators involved, Bitcoin is still heading towards a bullish move thanks to supportive macro fundamentals. Cryptocurrencies surged more than 60% earlier this year due to the increased bid for safe-haven assets among investors. Their demand comes on inflation concerns led by the Federal Reserve’s open stimulus package and near-zero interest rate policy.

This decision reduced US bond yields to 0.5%. It also makes the US dollar the weakest in the past two years.

Just this week, as AZCoin News reported, public company MicroStrategy purchased $ 250 million worth of Bitcoins as its tactical measure to combat potential inflation. Before them, it was veteran hedge fund investor Paul Tudor Jones, who allocated 1% – 3% of his entire portfolio to Bitcoin futures.

“The events marked the beginning of a greater institutionalization of Bitcoin. Lower interest rates, followed by poorer returns, led investors to seek profits from cryptocurrencies. And the trend may continue ahead.”

A listed company with strict requirements for financial prudence on its shareholders has acquired a significant amount of BTC, announced its decision publicly and forcefully, and took a stance adamantly that the choice will not hurt the company’s stock price or corporate social responsibility.

“This sends a signal of wide market acceptance of Bitcoin as a serious asset class for investment, and we see the market react positively to the news.”