Bitcoin price gains slightly but can’t break much beyond $30,000

Bitcoin price gains slightly but can’t break much beyond $30,000. Technical signals suggest a neutral to the bearish outlook. At the time of writing, BTC is changing hands at $30,176. 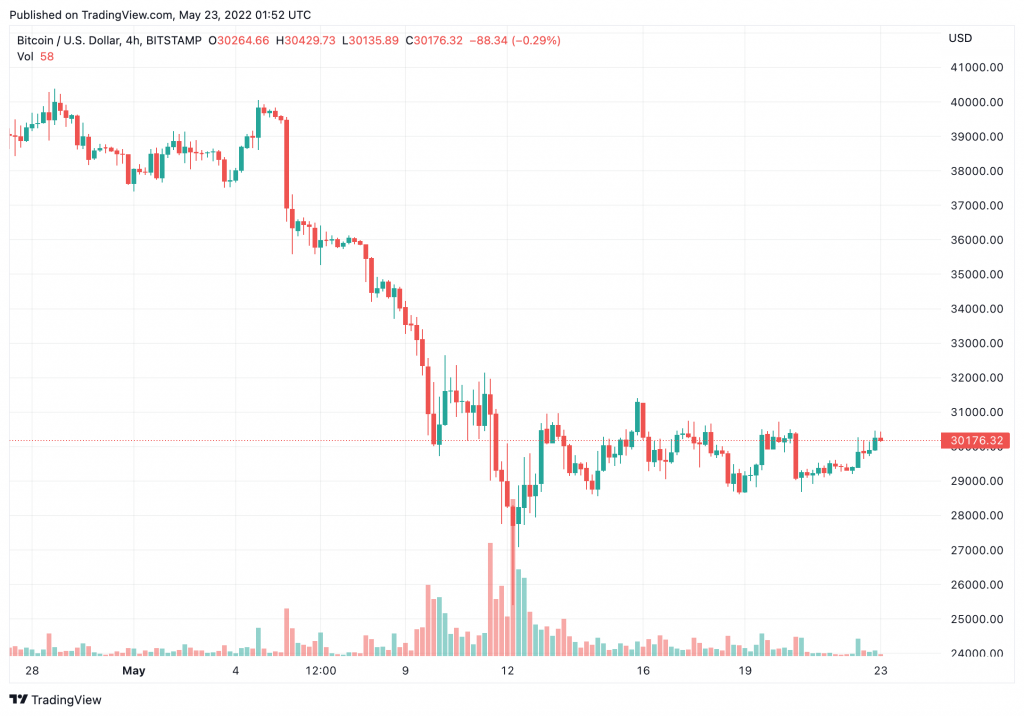 Bitcoin price has been roughly flat over the past week

Bitcoin improved a little over the weekend. Compared to earlier in the week, they could brag. But in the larger picture, the largest cryptocurrency by market capitalization was still deep in a bear market with no end in sight and struggling to hover above the $30,000 support line it has held for the past ten days.

Bitcoin retained the support levels it found last week and even attempted a range breakout. However, $31,000 – $32,000 remains a strong resistance level that Bitcoin needs to successfully breach before we can look toward more upside.

The Crypto Fear and Greed Index has dipped into the “Extreme Fear” territory. The index has dropped to just 10 points, the lowest level since July 2021.

Crypto Fear & Greed Index as of May 23 | Source: Alternative.me

On November 9, 2021, the index peaked at 84 points, which happened just one day before the leading cryptocurrency reached its current all-time high above the $69,000 level. And now you see the current situation…

Bitcoin continues to struggle around the lower end of a yearlong trading range. The cryptocurrency could find support at $25,000 and $27,000, although there is a risk of additional breakdowns in price. Recent returns reflect choppy trading conditions with no sense of direction. Momentum signals remain mixed despite oversold conditions on the charts. That suggests a neutral to bearish outlook over the next few days.

Ether, the second-largest crypto by market cap, was up similarly over the same period and holding just over $2,000 – its perch for much of the past few weeks. AVAX was among the big winners, recently rising more than 8%. SOL and TRX were both up over 5%.

The overall cryptocurrency market cap stands at $1.290 trillion, and Bitcoin’s dominance rate is 44.6%.