Bitcoin price fell to a fresh two-year low as crypto traders speculated over the future of Genesis Global, a victim of the fallout from the recent collapse of Sam Bankman-Fried’s FTX exchange. At the time of writing, BTC is changing hands at $15,848. 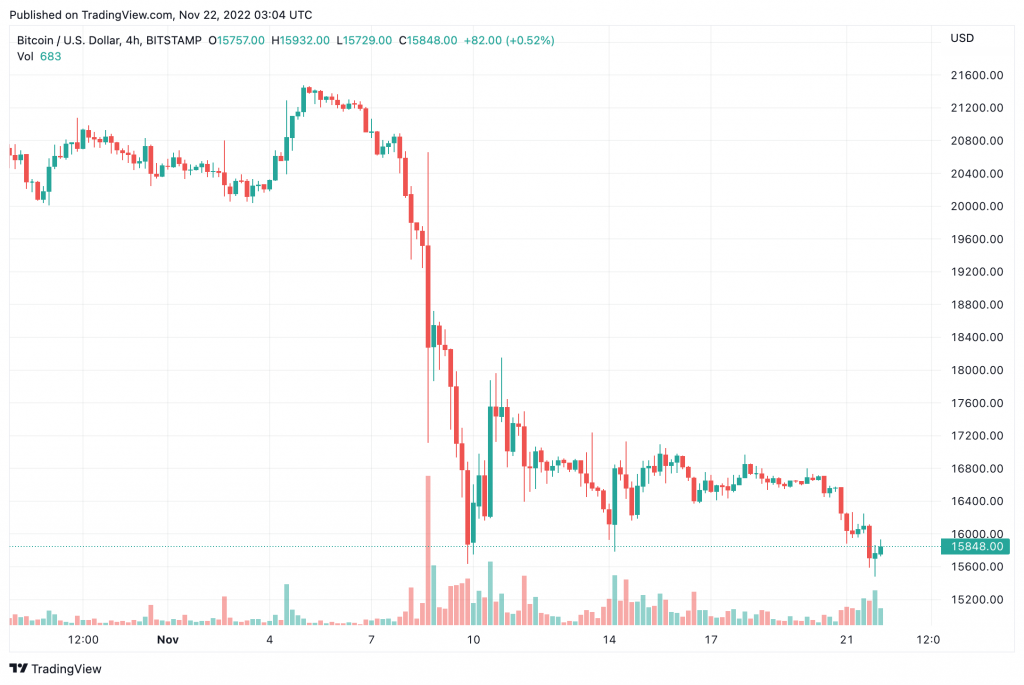 Crypto markets wobbled on Monday, with major assets feeling continuing nervousness over the potential for further market contagion following the collapse of the FTX exchange. Bitcoin dropped to the $15,500 level, nearing a two-year low, amid a gloomy market climate following the FTX collapse. The largest cryptocurrency by market capitalization was trading as low as $15,591, close to the 52-week low of $15,554. Bitcoin had settled back to around $15,800 as of press time, down roughly 5% in the past 24 hours. If the $15,500 level breaks for BTC, there is not much support until the $13,500 level, followed by the psychological $10,000 level.

“The BTC drop below $15.8k has caused many traders to finally exit the sector or liquidate assets. Bitcoin is seeing the lowest level of transactions made while in profit since Nov 2019. Bounces typically occur when this metric is severely negative”, Santiment stated. 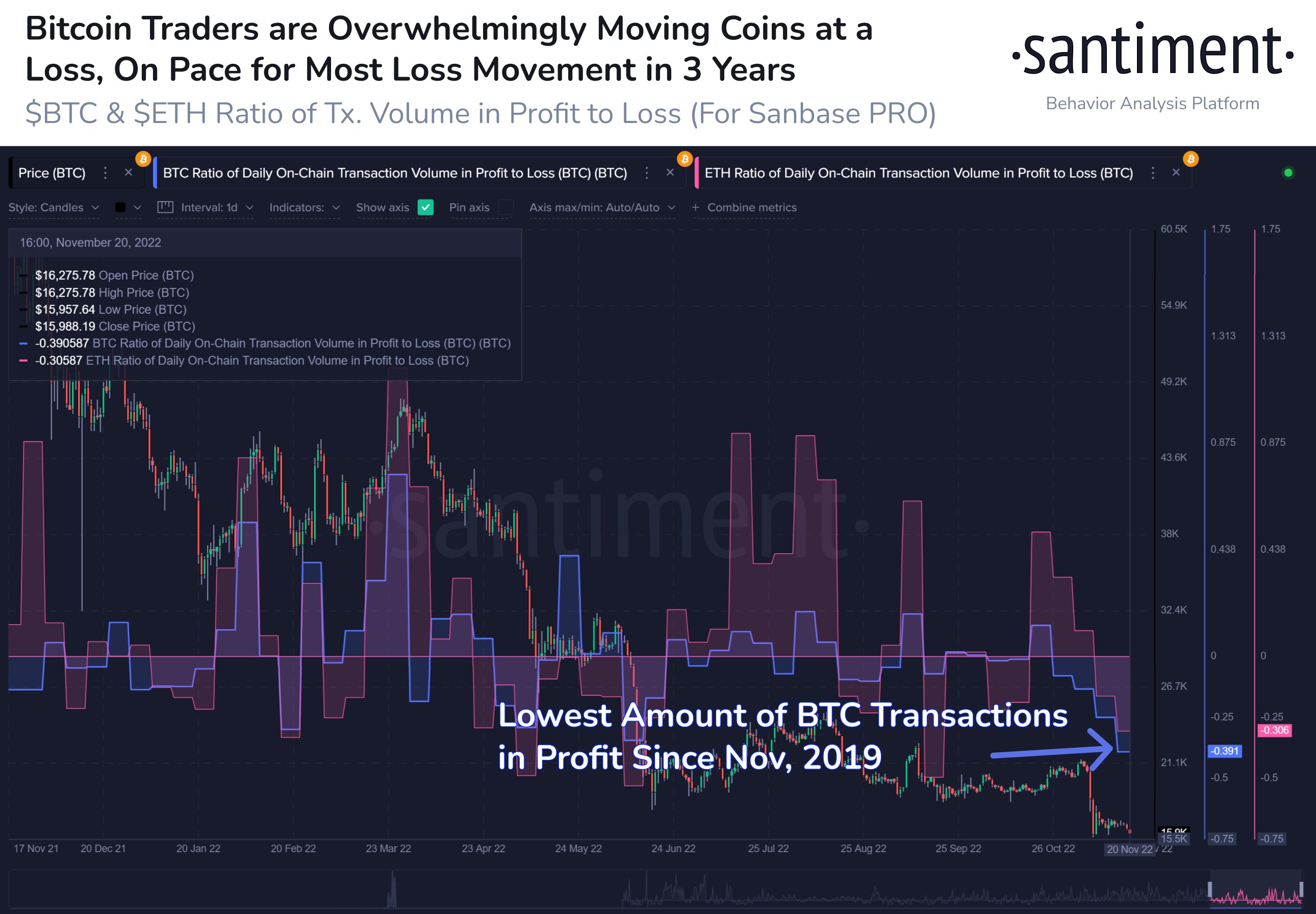 Bitcoin dropped below $15.8k for the first time in 2 years, and address activity spiked to its highest level in over six months. FUD, due to lack of trust in exchanges, historically benefits the patient, as we see BTC continue moving into self custody…

Ether slid further to the $1,080 level, down 8%. A CoinShares report Monday said short-ether investment products – those that bet on a price decline – saw the largest inflows on record, with net inflows of $14 million in the seven days that ended Nov. 18. The negative sentiments around ether could attribute to the uncertainty over the upcoming Shanghai update and the hacked FTX ETH assets, which sum to around $280 million.

“Chainlink jumped a mild +3% Monday despite Bitcoin & Ethereum falling. The bigger story is the LINK’s sudden active address surge, which began surging approximately when the FTX fallout occurred, & it is still up at one-year high levels”, Santiment reported. 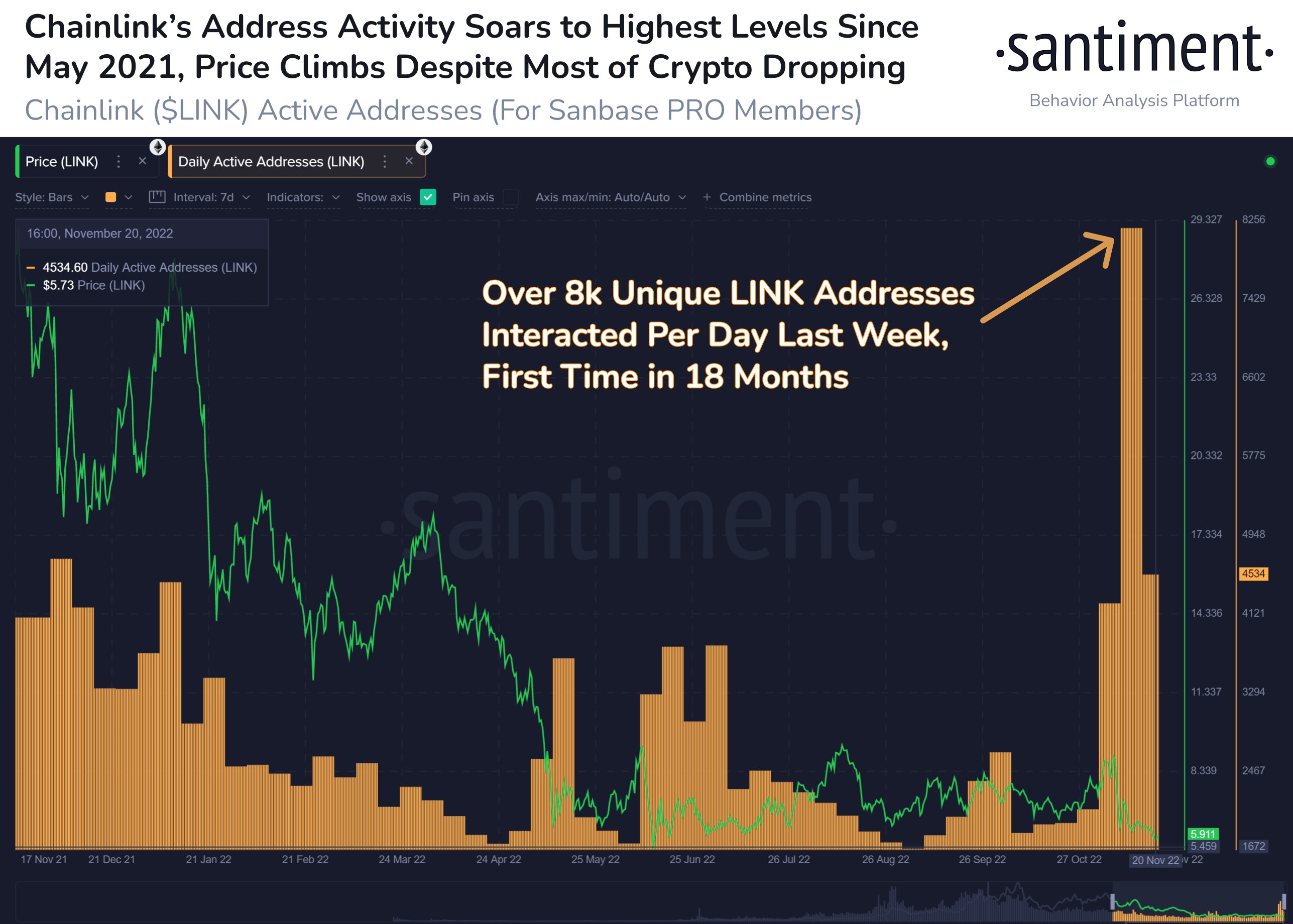 Crypto markets are on edge as traders speculate over the fate of another victim of the fallout from the collapse of Sam Bankman-Fried’s FTX exchange.

Genesis Global, a once-mighty crypto trading and lending firm, was reportedly in talks to raise fresh capital after it halted customer withdrawals last week. The case is being closely monitored by digital-asset traders partly because Genesis is owned by Digital Currency Group (DCG), which also owns Grayscale Investments, manager of the Grayscale Bitcoin Trust (GBTC), which is the largest publicly traded bitcoin fund. The speculation is that Genesis’s financial straits might put DCG in the position of needing to dispose of assets, which might affect GBTC and spill over into the market under various scenarios.

The overall cryptocurrency market cap stands at $787 trillion, and Bitcoin’s dominance rate is 38.6%.

As panic emerges on cryptocurrency market, $15,000 is no longer unrealistic scenario