Bitcoin price fell below $30,000, and suffered from a sell-off caused by Fed’s aggressive monetary tightening

Bitcoin price confirmed a break below its short-term uptrend and is now targeting lower support at $27,000 and $30,000. Sellers could remain active given the loss of upside momentum on the daily, weekly, and monthly charts. At the time of writing, the leading cryptocurrency is changing hands at $31,028 and is down 9% over the past 24 hours and 20% over the past week. 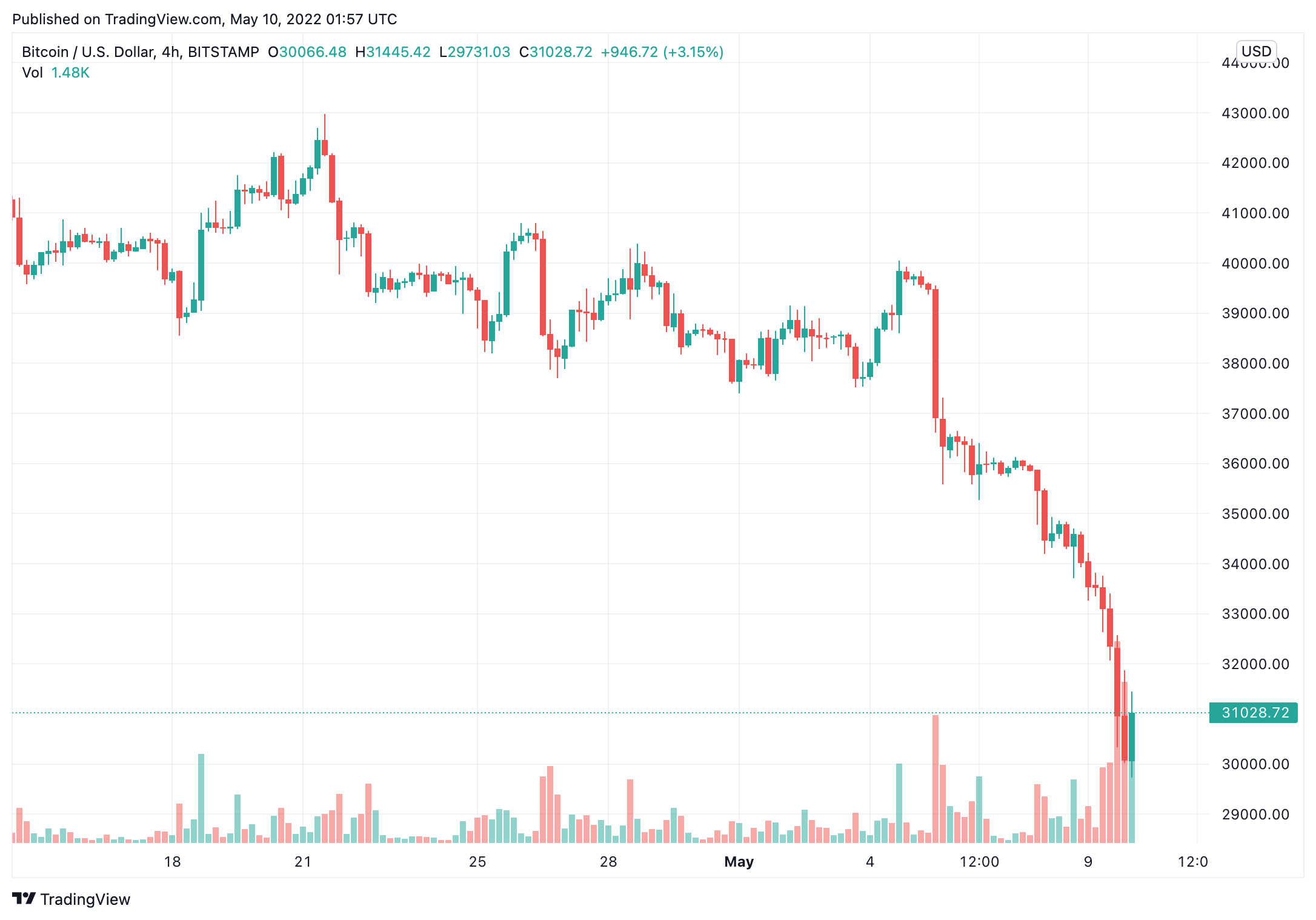 Bitcoin fell below $30,000 as both traditional financial markets and cryptocurrencies suffered from a sell-off caused by the U.S. Federal Reserve’s aggressive monetary tightening as well as recession fears.
The latest decline left bitcoin at a 10-month low and its lowest price this year. The last time the largest cryptocurrency by market cap fell below the $30,000 threshold was on July 20, 2021, when it hit $29,301 before rebounding.

Further, BTC is roughly 50% below its all-time high near $69,000, achieved in November of last year, compared to an 80% peak-to-trough decline during the 2018 crypto bear market. At this point, price action does not indicate a major cycle low.

The relative strength index (RSI) on the daily chart is the most oversold since Jan. 24, which preceded a relief rally. This time, however, BTC is at risk of breaking below its year-long price range, which means buyers could continue to take profits on short-term recoveries.

“As Monday has crossed into its final trading hour (UTC time), a landmark in net Bitcoin moving to exchanges has occurred. Today’s net sum of ~40,620 BTC in exchange inflow is the largest spike since Dec 2019. This marks maximal crowd polarization”, Santiment reported. 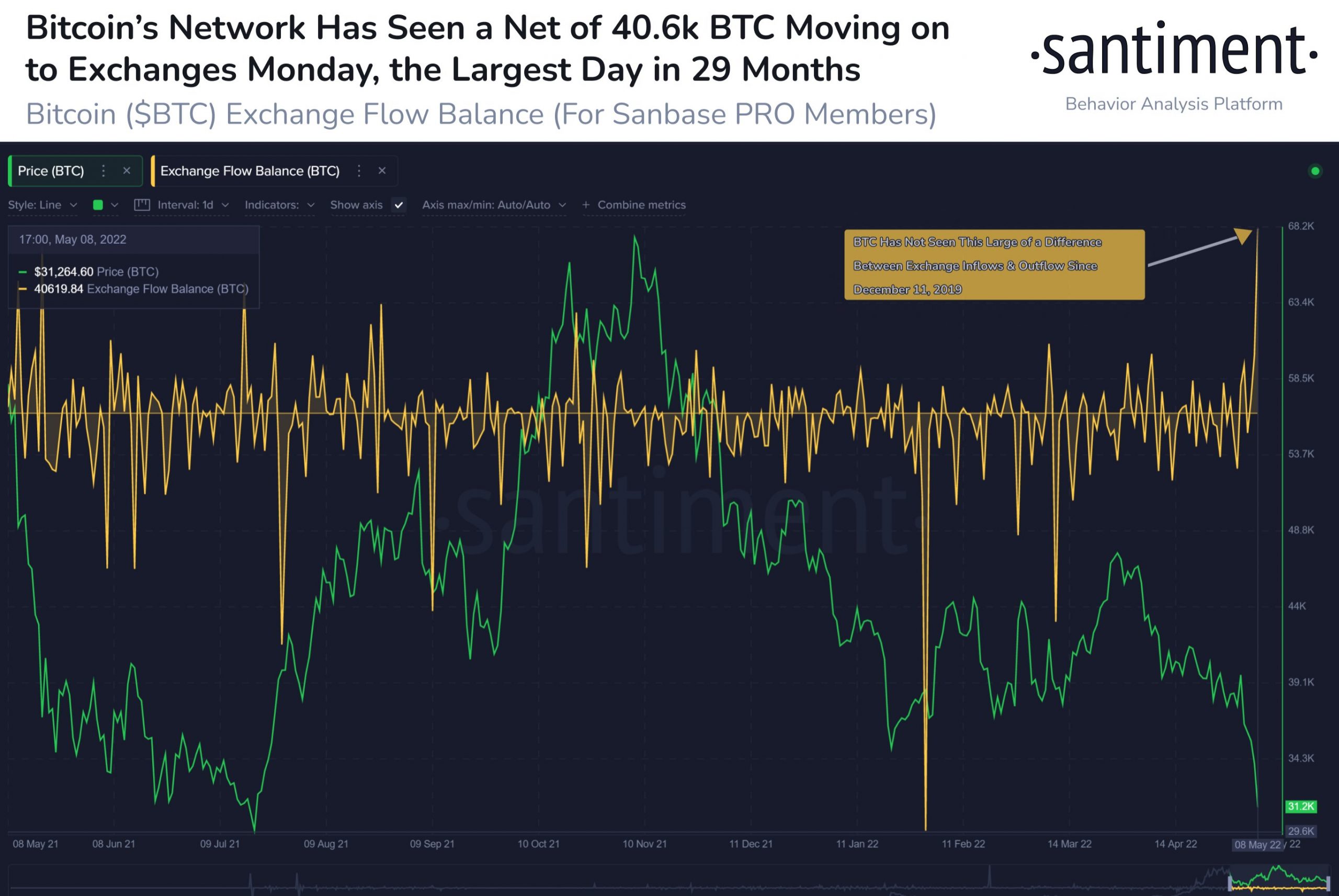 This month the Federal Reserve raised its benchmark interest rate by 50 basis points (0.5 percentage points) and will likely do so again at its next meeting in June. Bitcoin’s price drop is part of an across-the-board market sell-off.

Terra (LUNA) was off more than 30% over the same period after the Luna Foundation Guard, the Singapore-based, non-profit established to support the Terra network, tweeted that would loan $1.5 billion in Bitcoin (BTC) and TerraUSD (UST) to defend the peg of its algorithmic stablecoin to the U.S. dollar. CRO tumbled more than 16% at one point. ADA and DOT were off about 14%.

Ether was more resilient, roughly mirroring BTC’s more modest drop. Trading volume increased slightly, reflecting the pickup in sellers’ activity, although it remained well off 2022 highs earlier in the year. The Fear & Greed index remained in the extreme fear range where it has spent the past month amid investors’ growing concerns about inflation, central bank monetary hawkishness that could send the global economy into recession, and the widening aftershocks of Russia’s unprovoked invasion of Ukraine. Daily, weekly and monthly charts for bitcoin have all trended negative.

The overall cryptocurrency market cap stands at $1.406 trillion, and Bitcoin’s dominance rate is 41.8%.

Bitcoin price is off nearly 55% from its November peak, 40% holders now underwater on their investments