Bitcoin price failed to stay above $30,000 as some buyers remained on the sidelines. The cryptocurrency tumbled later, indicating a loss of short-term momentum. At the time of writing, BTC is changing hands at $29,242. 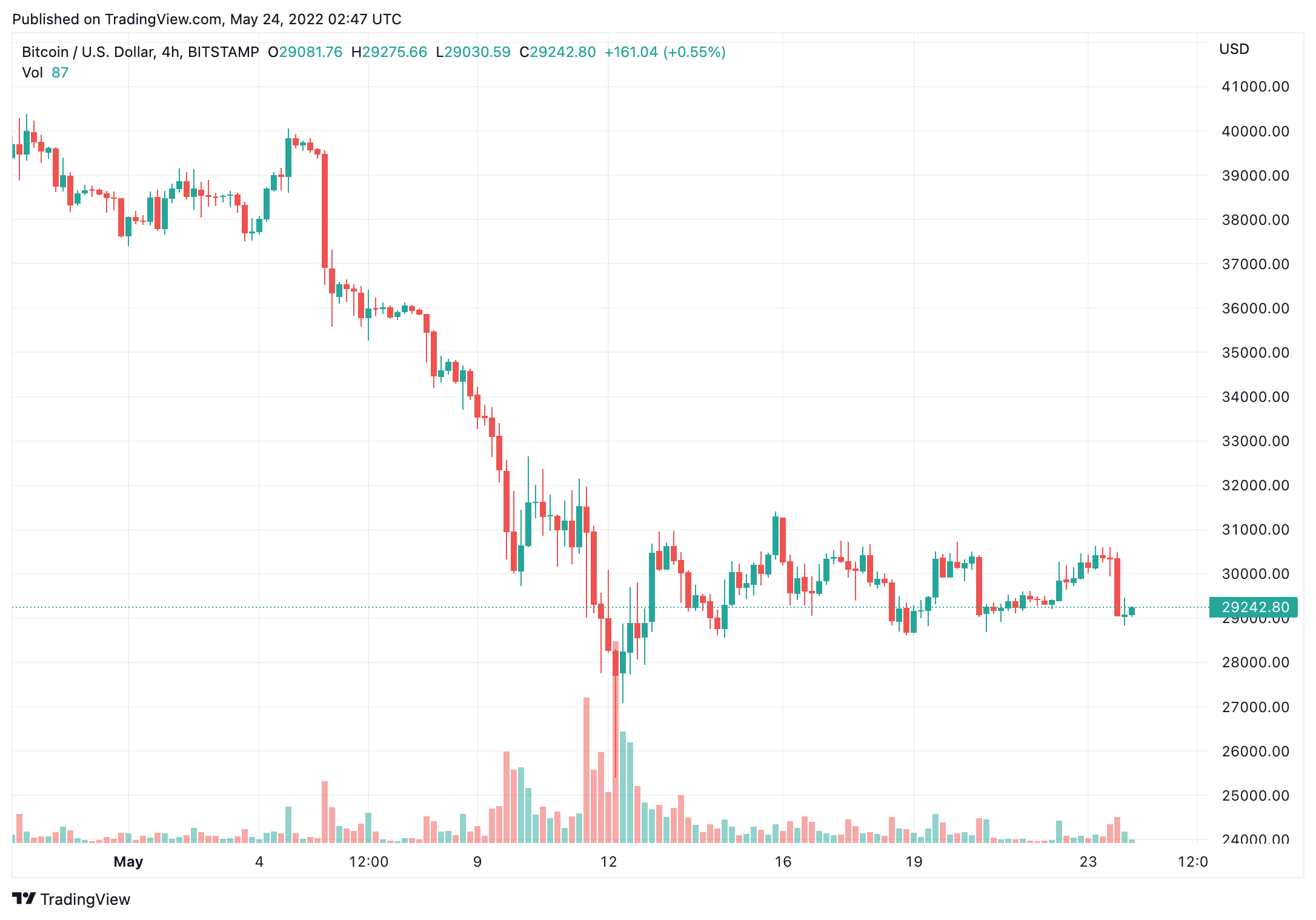 By early afternoon, Bitcoin had fallen almost 4% over the past 24 hours to the low end of the $29,000-$30,000 range it has occupied for the nearly two weeks since the UST stablecoin and Terra (LUNA) that supports it imploded. The largest cryptocurrency by market capitalization has dropped 26% from its high this month, near $40,000, and roughly 55% since reaching its record peak last November.

“Bitcoin dropped -4.0% Monday after a solid day from the S&P 500. These two have fluctuated tightly throughout 2022, and this separation may be caused by BTC resistance at $30k. If equities continue upward, though, expect good things for crypto”, Santiment reported. 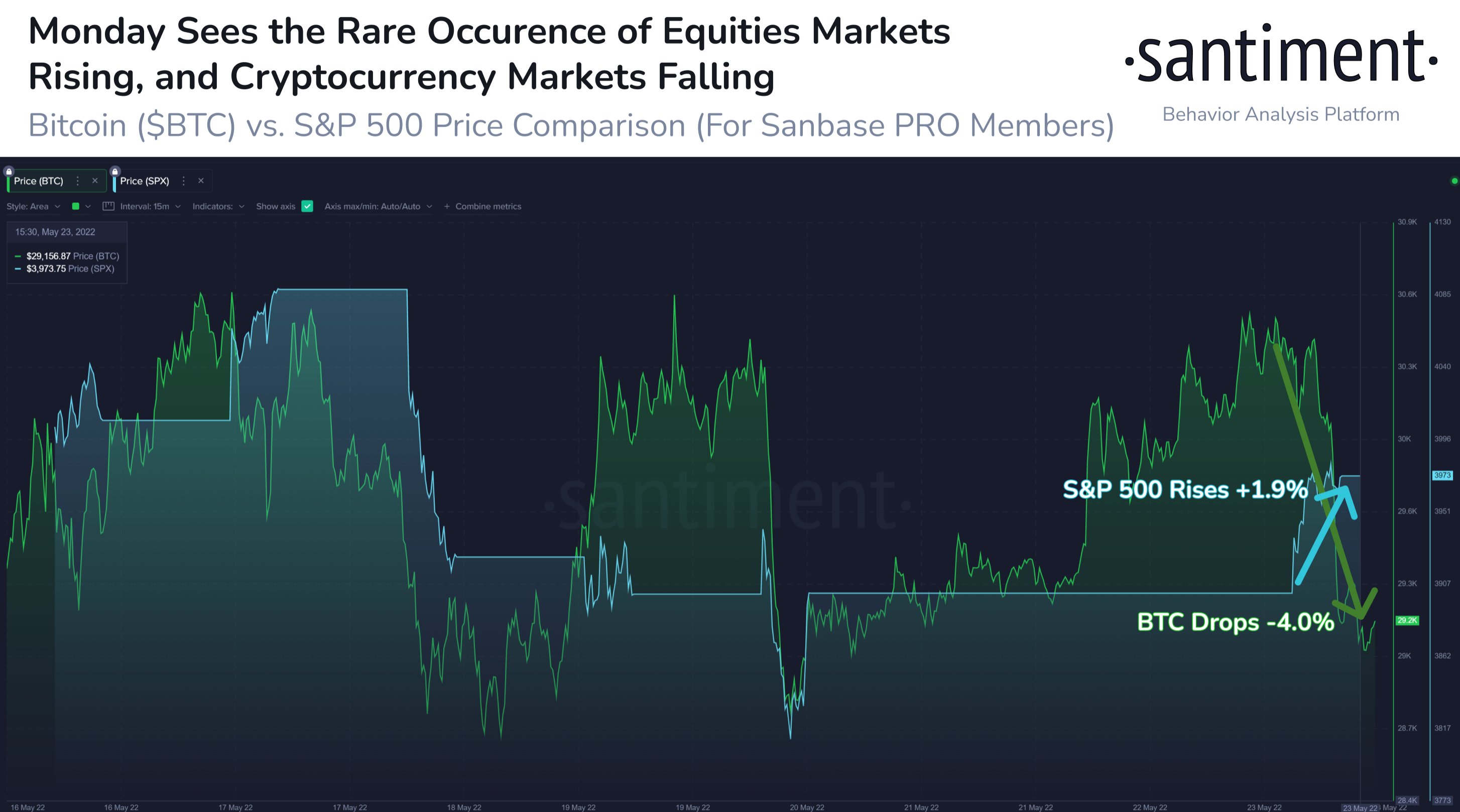 Bitcoin (BTC) has traded in a tight range between $28,500 and $30,000 over the past week. Despite short-term swings, the cryptocurrency has managed to hold support above $27,000, which could keep some buyers active. Momentum signals are improving on the daily chart, similar to what occurred in late February and March. Further, the daily chart’s Relative Strength Index (RSI) continues to rise from oversold levels, which could point to a relief bounce in price.

Still, the daily RSI will need to rise above 50 to determine if a price bounce has staying power.
The RSI is the most oversold on the weekly chart since March 2020, although momentum signals remain negative. That suggests the upside could be limited for BTC, initially toward the $33,000-$35,000 resistance zone.

“Bitcoin’s sentiment is at rock bottom, indicating the amount of doom and gloom surrounding BTC and crypto in general is at its most negative since Black Thursday in March, 2020. Weak hands may continue to present opportunities for the patient”, Santiment added. 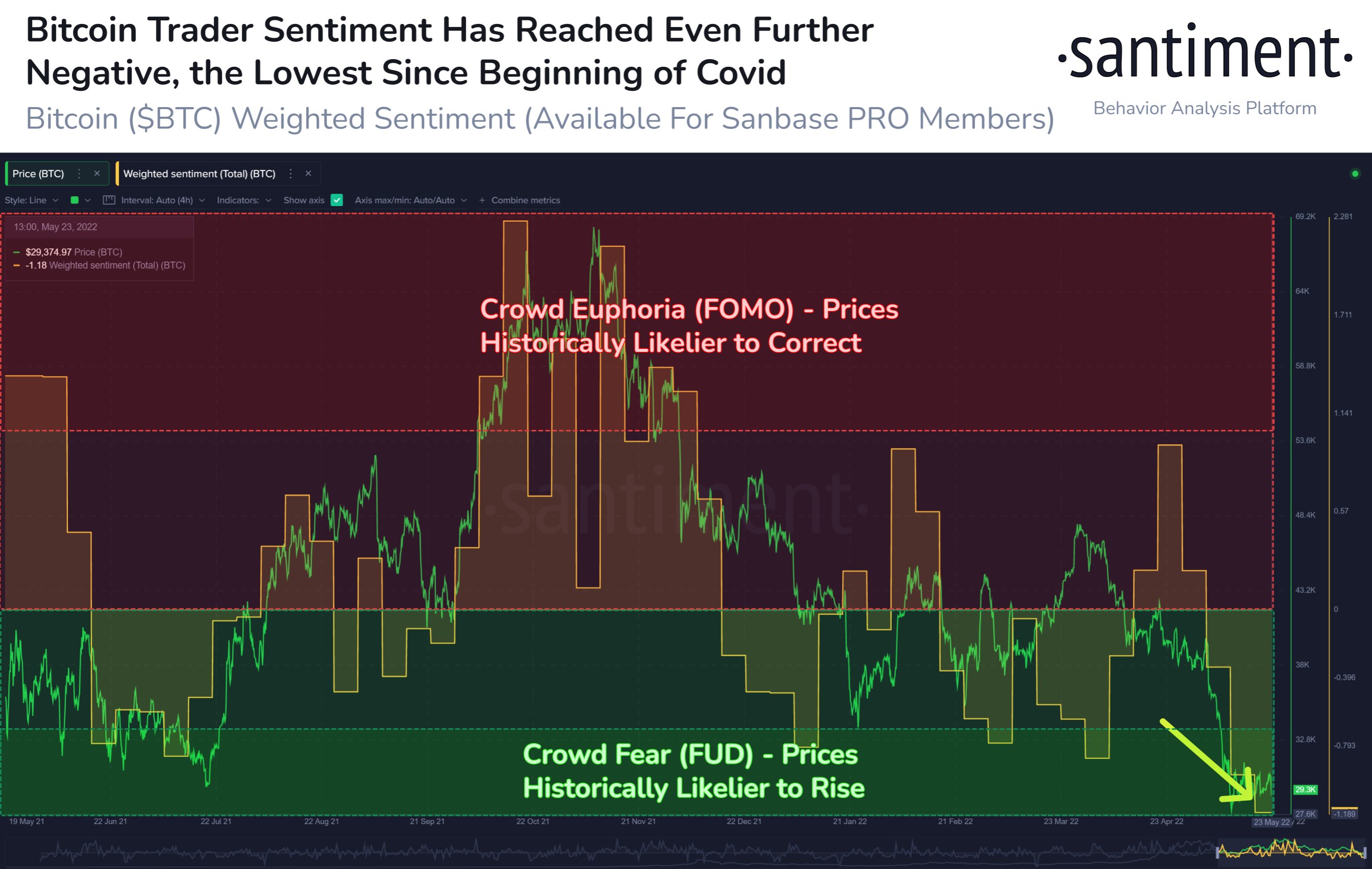 Ether, the second-largest crypto by market cap, was down approximately 3.5% over the same period and changing hands a little below $2,000. Most major cryptos spent much of the day in the red, with AVAX recently off over 8% and GALA, ALGO, and MANA each down more than 6% amid ongoing investor fears about inflation and a possible recession central banks tighten monetary policy.  But some altcoins were mixed. For example, Fantom (FTM) rose by 16% over the past 24 hours, while Decentraland (MANA) declined by 3% over the same period. Choppy trading conditions suggest caution among crypto traders, especially over the past week.

The overall cryptocurrency market cap stands at $1.258 trillion, and Bitcoin’s dominance rate is 44.2%.