Bitcoin price faced an extreme correction up to 15%, top 10 coins decrease by more than 10%

Bitcoin price was facing an extreme correction earlier today. Over the span of 12 hours, Bitcoin fell from the $ 41,000 zone to its lowest on spot exchanges near $ 34,000 and a low on futures exchanges near $ 35,000. At press time, according to CoinMarketCap, BTC is trading around $ 35,474, recording a drop of more than 15 percent on the day. 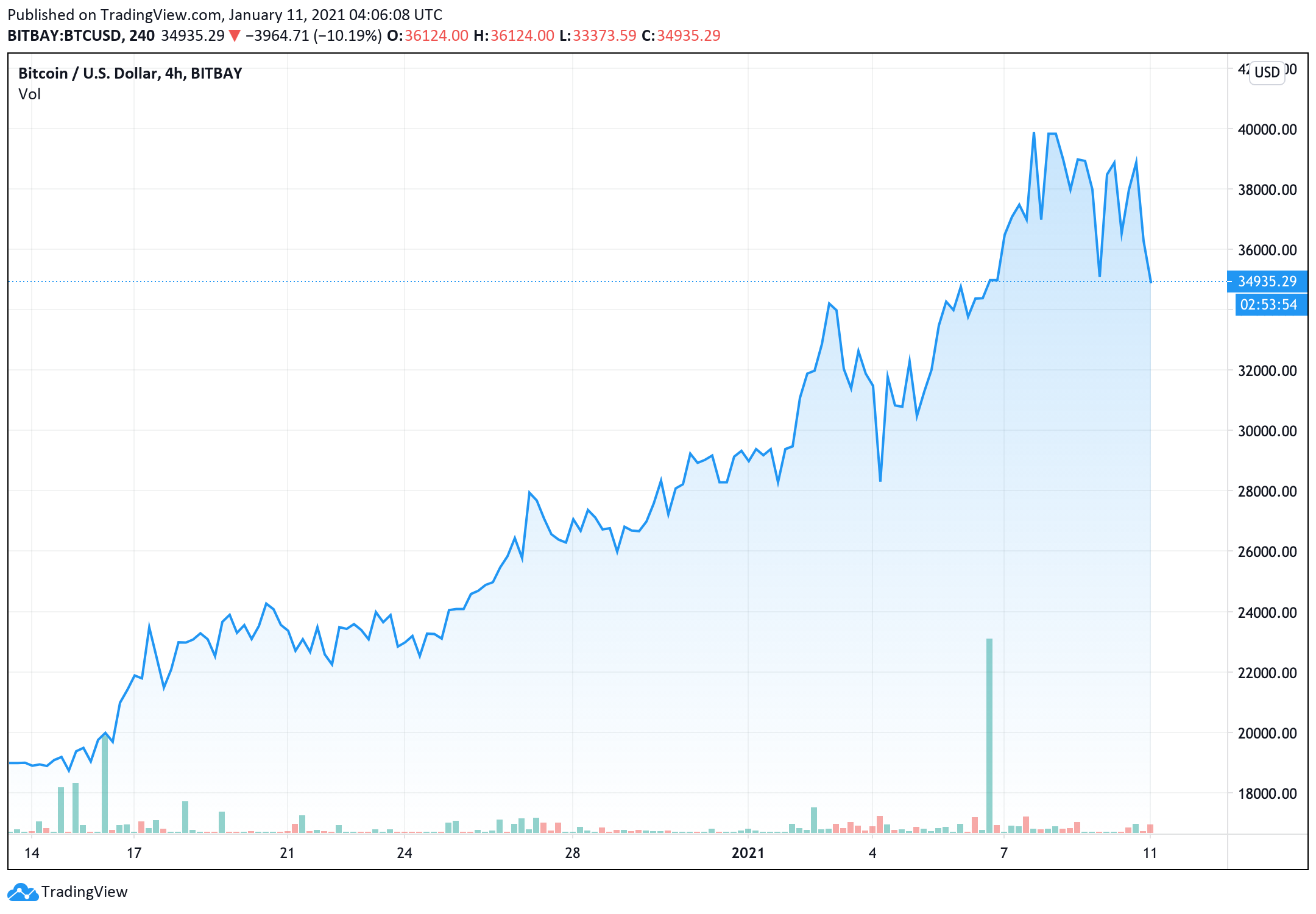 Bitcoin price has lost more than 15% during this rally

Bitcoin faced an extreme correction earlier today. Over a 12-hour period, BTC fell from the $ 41,000 region to its lowest level on spot exchanges near $ 34,000. As it turns out, BTC fell by more than 15% during this rally.

Many thought this was the start of a larger correction. Even if Bitcoin is near the lows, the funding and premium rates seen on futures exchanges for BTC are extremely high, meaning the likelihood of further declines is increasing.

However, Bitcoin quickly bounces when buyers step in at the same time. According to technical analysts, Bitcoin has regained key support levels.

According to trader Pierre, Bitcoin has regained key technical support on its 15-minute chart. While this is not the end of all and all support levels, analysts are optimistic that this technical appearance could help fuel the ongoing rally.

However, Bitcoin faces some overhead resistance, which could put an end to the ongoing recovery. On-chain data could suggest that the rally is in progress starting to get too hot, and a short-term correction or medium-term consolidation is probable.

It seems like Bitcoin is reaching a level of overheating lately for every single indicator focused on the main chain. Bitcoin has long faced corrections in its bull market. In 2017, the coin regularly dropped 20% – 30% before moving to a new all-time high.

After the fall of Bitcoin, Altcoins also fell into a state of more than 10% – 20% decline during the day. In the top 10 on CoinMarketCap, the biggest losses were Litecoin with a drop of nearly 24%, Polkadot down more than 20% on the day, recording a drop of more than 24% over the past seven days. 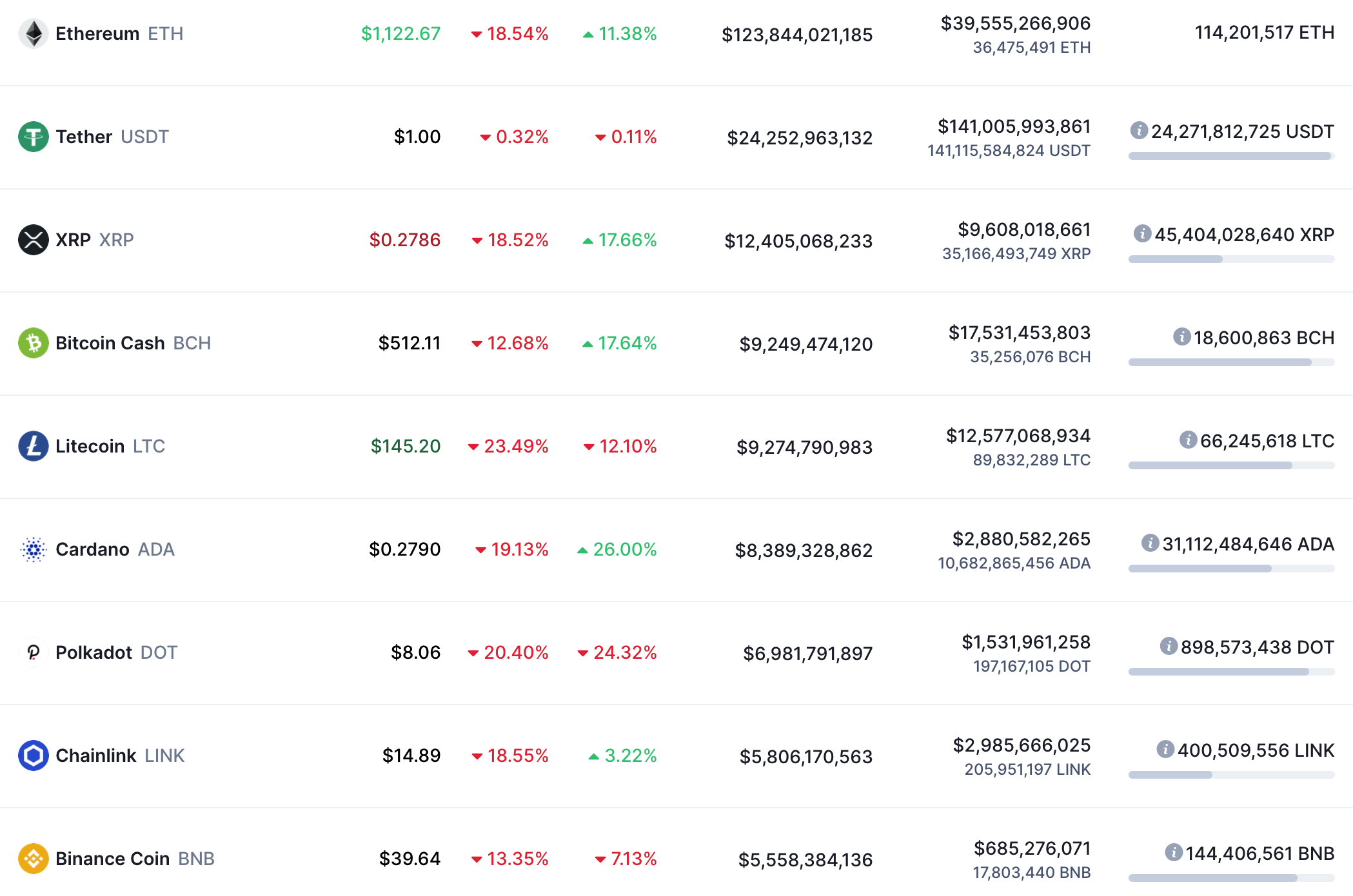 Looking further, the top 20 with Bitcoin SV suffered heavier losses, with a 33% drop on the day. EOS, as mentioned, was influenced by the CTO’s exit from the project and the market’s downturn, and has dropped more than 26% in the past 24 hours.

The entire cryptocurrency market cap has dropped 16%, hovering around $ 919.34 billion. In which, BTC Dominance is at 69.1%. So the Altcoin season just arrived not long ago had to say goodbye to us?

Dan Larimer is resigning from his post as the CTO of the development company Block.one, EOS price down 22% for the day

$1.66 billion worth of Bitcoin has been liquidated in one day, with the top cryptocurrency collapsing to $33K