Bitcoin price broke $21,000 in early weekend trading for the first time since early November, still riding the tailwinds of falling inflation and a more optimistic view of the economy, before retreating slightly. At the time of writing, BTC is changing hands at $21,230. 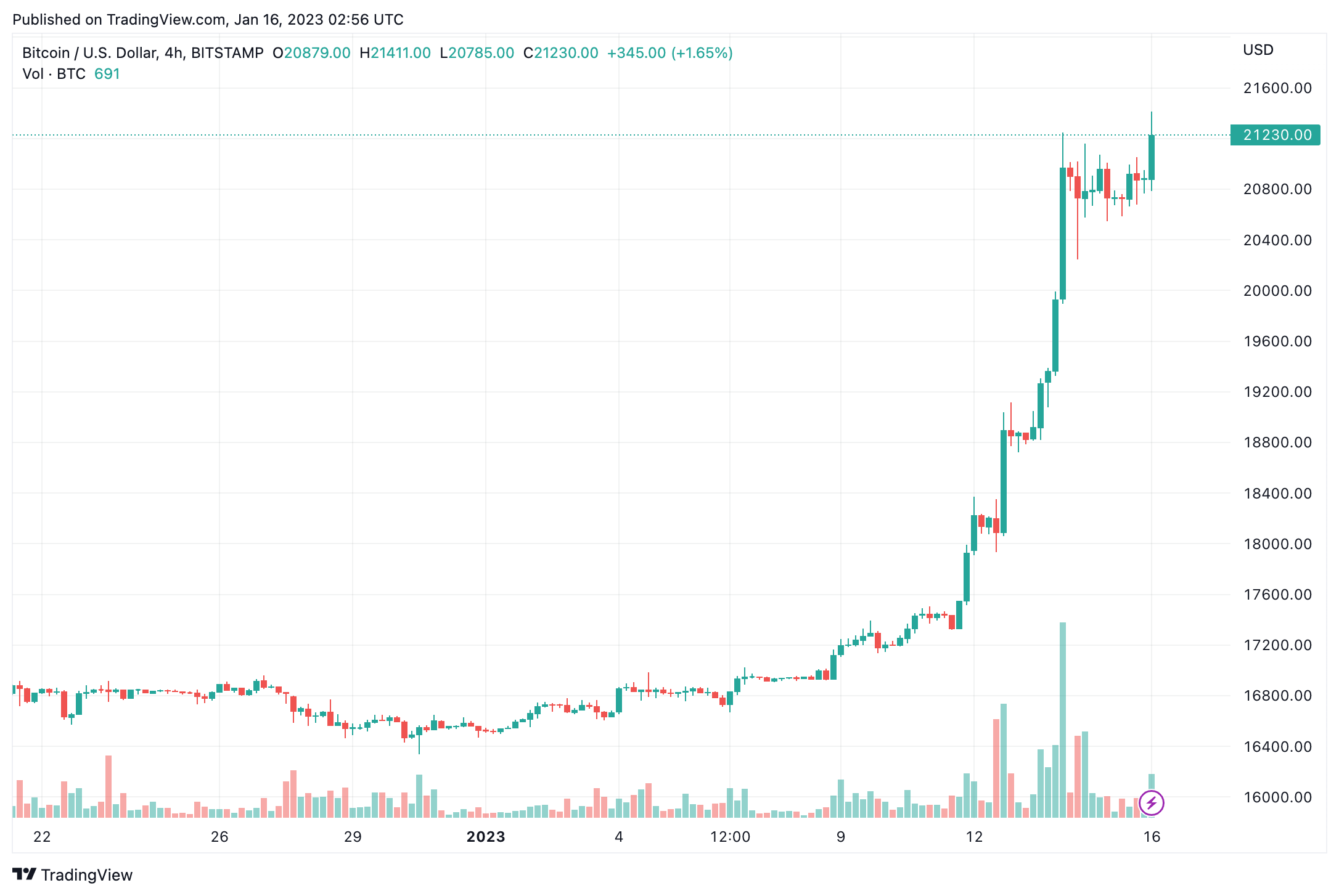 BTC was recently trading at around $20,830, approximately flat over the previous 24 hours but up a stunning 25% year to date, with the majority of the gains occurring since last Tuesday, when BTC was still languishing around $17,400. The rise coincides with improved investor optimism that the Federal Reserve of the United States is managing inflation without plunging the country into recession. This trend has driven most riskier assets higher this year.

Ether followed a similar trajectory to bitcoin, extending its late-week gains into Saturday and reaching a two-month high before dipping marginally. ETH was recently trading above $1,550, roughly where it stood a day earlier at the same time.

Other big cryptocurrencies were uneven, with some climbing a couple of percentage points and others falling; however, FTT, the token of the beleaguered crypto exchange FTX, recently rose 35% to trade for a little over $2. FTT was trading above $35 just seven months ago. SOL, the Solana blockchain currency that has been gaining in recent weeks despite its association with the FTX crisis, lost roughly 5%. MANA, the token of Decentraland’s 3D virtual reality platform, was up more than 16%.

XRP declined 2.7% to $0.38, but is still up 11.5% for the week. XRP gained less than most other major cryptocurrencies as a legal action between the US Securities and Exchange Commission (SEC) and Ripple Labs Inc., which utilizes XRP in its payment network, casts doubt on the token’s future.

The Consumer Price Index (CPI) for December in the United States was announced last week, and it revealed that inflation grew 6.5% year on year, in line with estimates and lower than the 7.1% recorded in November. The monthly reduction was the largest since April 2020. The Fed boosted interest rates by 50 basis points last month to between 4.25% and 4.5%, the highest level in 15 years. It had hiked interest rates by 75 basis points in four successive meetings to combat inflation. Fed Chair Jerome Powell has warned of more rate hikes in 2023. The next Fed meeting will be placed from January 31 to February 1, with CME Group analysts anticipating a 94.2% chance of a 25 basis point rise based on the most recent CPI data.