Bitcoin price has turned down 2% to more than $ 55,858 while the market continues to diverge deeply, some coins up over 10%. 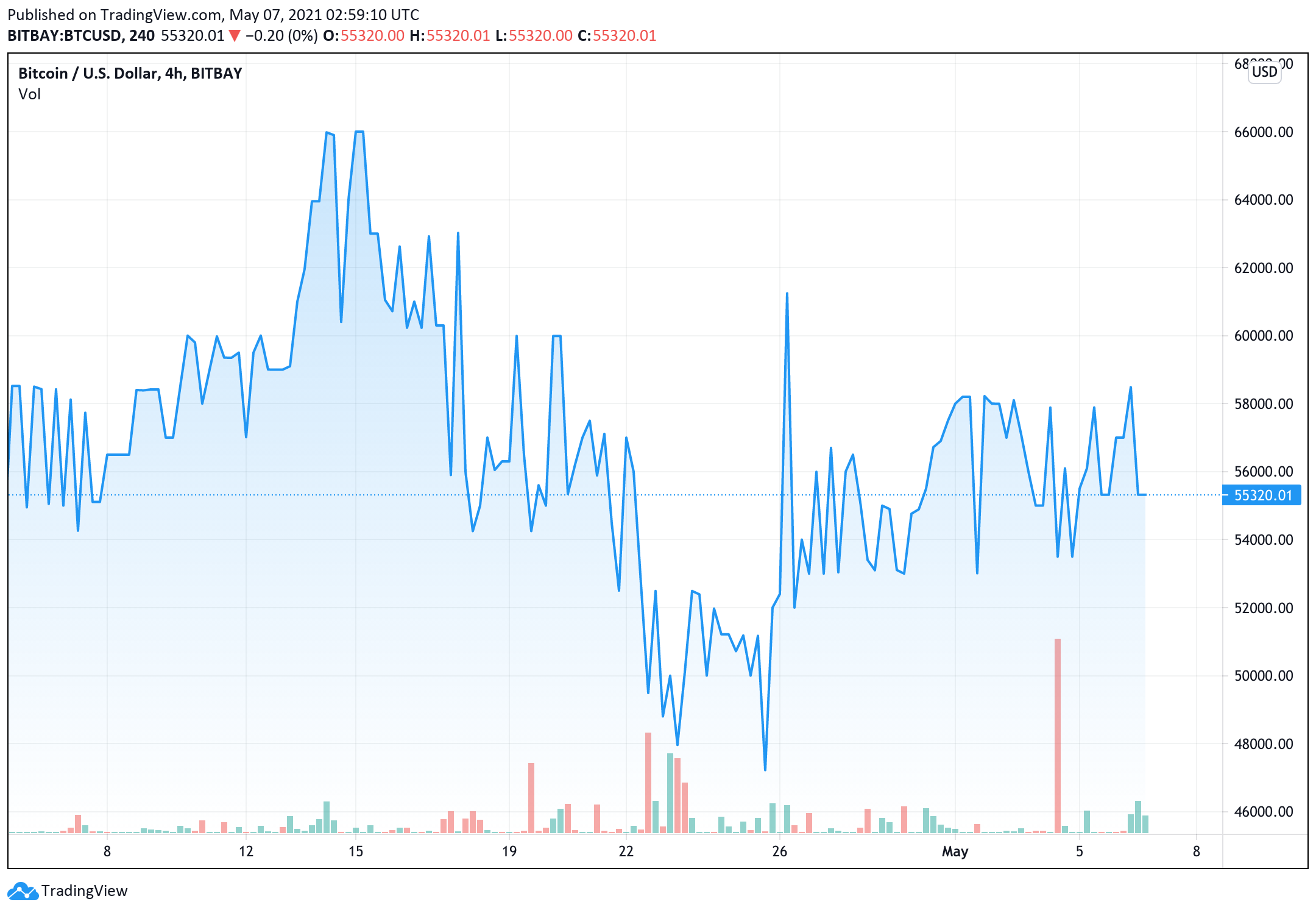 Bitcoin price drops, Altcoin season has come when the majority of coins in the top 100 on CoinMarketCap rise in price?

According to CoinMarketCap, during that time period, Bitcoin transactions reached $ 69 billion, capitalization fell back to $ 1,054 billion. Several large-cap tokens have reached multi-year highs, and all of this happens as Bitcoin’s price struggles to hold any gains due to the news event it has accumulated throughout the week.

Some of the top virtual currencies fell according to Bitcoin such as Ethereum, Binance Coin down 3%, Dogecoin by 11.5%, Chainlink down 3.8%. However, there are still many altcoins rebounding strongly, of which Cardano increased 14.3%, Ripple increased 1.4%, Bitcoin Cash increased 4.5%, Ethereum Classic increased 40%, Stellar increased 11%.

One of the most notable performances was given by Ethereum Classic (ETC), the “unaltered” Ethereum (ETH) fork that has been gaining traction over the past week as its dedication to a proof-of-work consensus mechanism attracts the attention of miners and retail ‘Robinhood’ investors.

Data from Cointelegraph Markets and TradingView shows that after hitting as low as $ 86.12 at the start of trading on Thursday, the ETC price jumped 81% to hit a new all-time high of $ 179.83 as 24-hour trading volume soared to a record $ 39.1 billion.

Several large-cap cryptocurrencies have seen significant gains lately including Litecoin (LTC) reaching a year-high high against BTC and a 68% rally in Bitcoin Cash (BCH) skyrocketed above $ 1,500 for the first time since May 2018.

According to some professional traders, Bitcoin’s recent drop may just be a correction after a hot rise. In the long run, Bitcoin continues to climb, possibly even reaching $ 1 million. Two weeks ago, the world’s most popular cryptocurrency hit a record $ 64,000. The main reason is that investors are excited when the crypto exchange Coinbase does an IPO.

However, Bitcoin is facing stiff competition from other cryptocurrencies, including Ethereum. Bloomberg identified the days Bitcoin as the only option for investors who want to invest in a crypto is just the past.

The steady strength shown from altcoins has led to a steady decline in Bitcoin dominance over the past month, which dropped to a low of 45.25% on May 6. According to analysts, this is yet another sign that an altcoin season is in full effect. 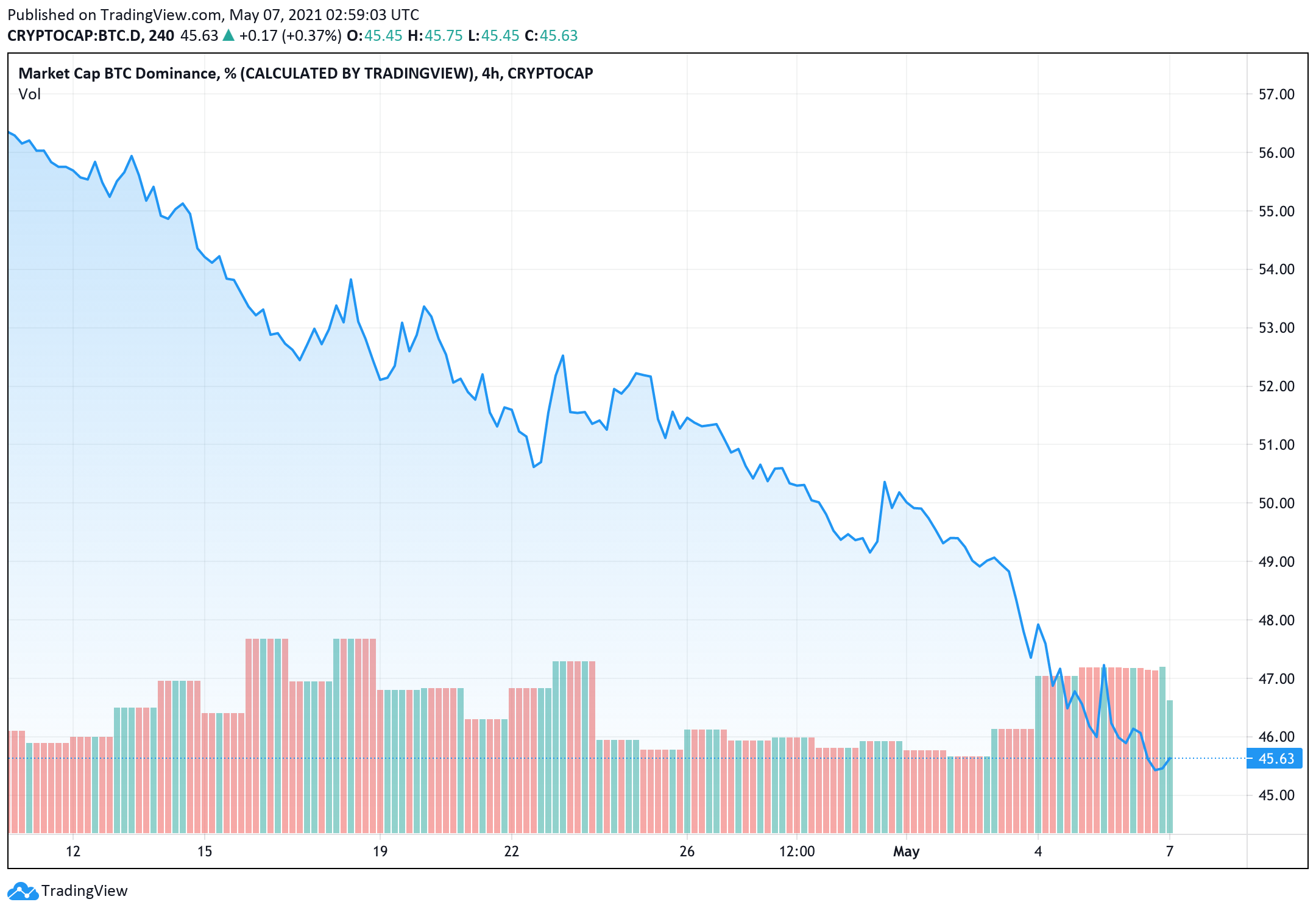 While institutions appear to heavily favor Bitcoin and to a lesser degree Ether, retail traders have been drawn to lower-priced tokens that offer the possibility of larger gains, as evidenced by the recent price explosion in Dogecoin (DOGE).

If this trend continues, it’s likely that Bitcoin’s dominance rate could continue to slide lower as new funds coming into the cryptocurrency ecosystem through stablecoins are more widely distributed.