Bitcoin price dropped to $ 9,800, the bloody Altcoin market but Hedera Hashgraph still increased by over 5%

At dawn on February 17, the Bitcoin price slipped to $ 9,600, dropping more than $ 300 in less than an hour. At press time, BTC is being traded at $ 9,827. Over the weekend, most cryptocurrencies experienced miserable dumps. Bitcoin dominance has increased slightly to 63.2% since yesterday.

The bulls’ dark weekend begins Saturday after Bitcoin falls off the $ 10,000 threshold. Earlier this morning (February 17), Bitcoin dropped further and bounced off key resistance at around $ 9,600.

So, where does Bitcoin price go? 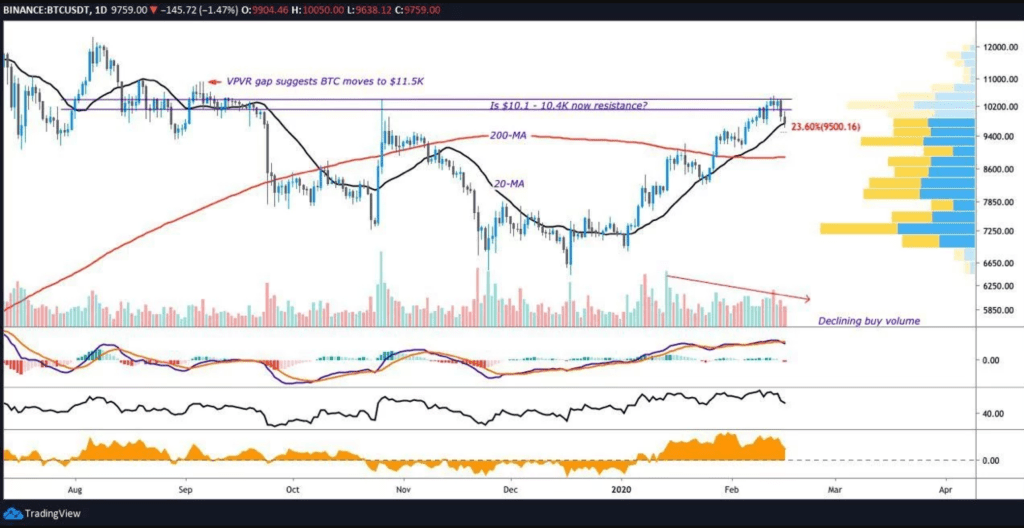 However, one thing to note is that the Bitcoin futures market on CME closed last Friday at $ 10,495. Thus, the price gap is emerging. Meanwhile, the Fear and Greed Index (F&G Index) is at 59, showing that the market is still in the Greedy psychology, despite falling from 64 yesterday. 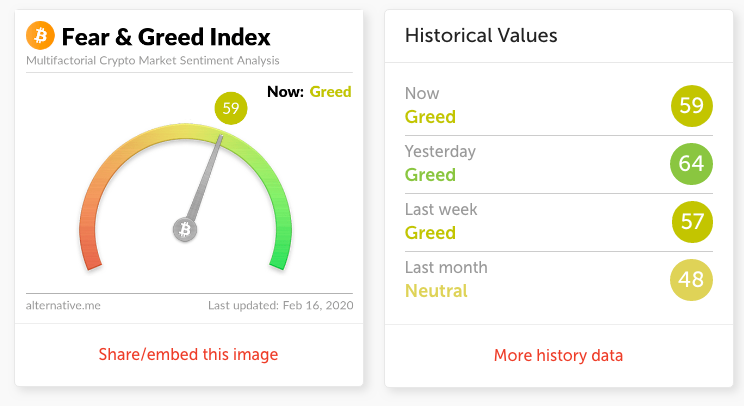 Bitcoin price has increased by 40% since the beginning of the year, followed by the rapid growth of many altcoins. However, when the market plummeted, altcoins also suffered the most substantial losses. Ether (ETH) has dropped nearly 8.85% in the past 24 hours. Meanwhile, Bitcoin SV (BSV), EOS, Stellar (XLM) suffered more substantial losses with values ​​of 15.21%, 14.38%, and 12.43%, respectively.

The reason for Hedera Hashgraph’s sharp increase comes from the announcement that Google will join the management board on Tuesday. As one of the advisory organizations involved in managing networks and securing decentralization for the hashgraph, the Google Cloud platform will operate a node and perform hashgraph analysis along with other Google DLT data. This is the 11th member of this board, along with other members such as IBM, Tata Communications, and Nomura Holdings. (In fact, although Google is the representative of the council, the Google Cloud Platform is the one who directly runs the node and provides the analytical data.

“Independent research firm @fundstrat predicts that Hedera #Hashgraph, the enterprise-grade public distributed ledger platform, could generate $1.9 billion in value across its network by 2024.” Read more from @Rachelwolf00 at @Cointelegraph: https://t.co/etLfOa3Dld

Google says there are currently no plans to use the Hedera Consensus Service. The service will be launched on Hedera mainnet this week. Instead, Google will participate in providing technical guidance and verification technology. A Google representative said it would only focus on developing solutions that build current business values ​​in the financial services ecosystem, from capital markets to retail banks and DLT.

Currently, Bitcoin Dominance is at 63.1%, with cryptocurrency market capitalization dropping to $ 286 billion.

MoneyGram’s latest product real-time money sending does not make use of Ripple technology, what happened?

Binance has a strange issue with placing orders and checking balances, does this affect the market?