Bitcoin price declined from a high of $30,658 as buyers remained on the sidelines

Bitcoin price declined below $30,000. The largest cryptocurrency was fluctuating at around $29,633 after a report showed U.S. jobs growth slowed in May. 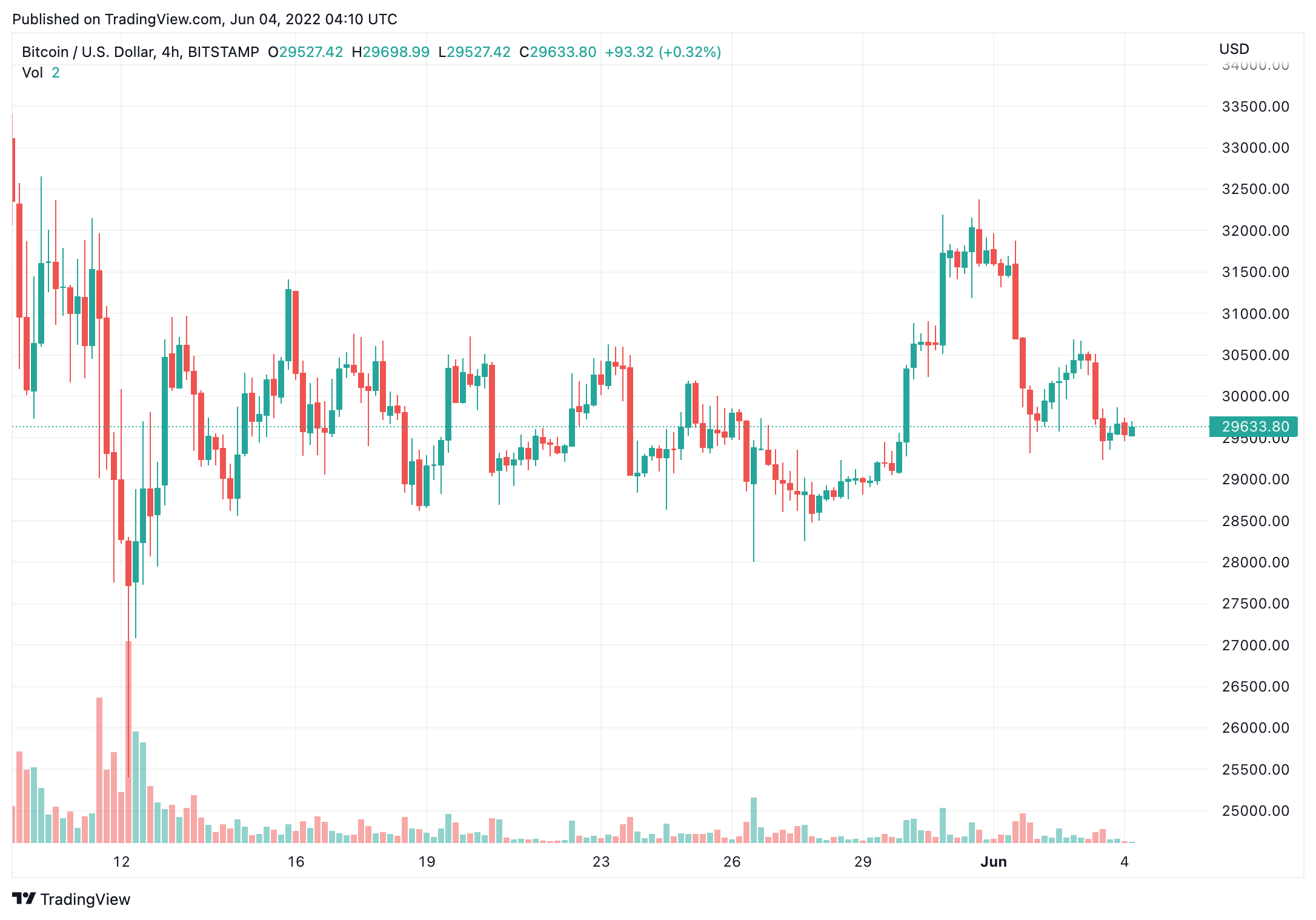 Bitcoin was struggling to find direction yesterday after a U.S. government report showed that the pace of jobs growth slowed in May – potentially a sign that the Federal Reserve’s recent moves to cool the economy might be starting to have an impact.

“The leverage increases as the sideway price action continues.”

Bitcoin continues to face strong resistance at its 50-day moving average, which currently sits at $34,000. The cryptocurrency has been anchored to the $30,000 price level over the past two weeks, where a majority of the trading volume occurred. That could point to volatile price moves later this month.

On the daily chart, bitcoin’s relative strength index (RSI) is stuck below the 50 neutral mark, which indicates slowing momentum behind the recent upswing in price. The persistent decline in momentum means BTC’s six-month downtrend remains intact. The weekly RSI is the most oversold since March 2020, which preceded an uptrend in price. This time, however, the upside appears to be limited because of negative long-term momentum signals.

Still, over the short term, BTC could stabilize above the $20,000-$25,000 support zone. The 200-week moving average, currently at $22,179, is another gauge of long-term trend support. BTC is on the watch for a countertrend bullish signal, per the DeMark indicators, which could appear over the next two weeks. That could pave the way for a short-term price bounce, which would delay additional breakdowns on the chart. Upside moves could be fleeting, however, with secondary support at $17,673 providing a more stable ground for capitulation.

The cryptocurrency is up by 3% over the past week but has struggled to outperform a majority of altcoins.  Internet Computer (ICP) pared Thursday’s gains and declined by 10% over the past 24 hours, compared with BTC’s flat performance over the same period. Avalanche (AVAX) and Solana (SOL) were down by 4% on Friday, while Polkadot (DOT) rose by 4%.

Sentiment among crypto traders remains bearish, evidenced by a downtick in the bitcoin Fear & Greed Index over the past few days. The index moved deeper into “extreme fear” territory, similar to what occurred in January of this year, which preceded an upswing in BTC’s price.

The overall cryptocurrency market cap stands at $1.216 trillion, and Bitcoin’s dominance rate is 46.4%.

Over 650 million XRP have been sent by Ripple, several anonymous wallets and crypto exchanges