Bitcoin price reached $23,230 for the first price since August 2022, continuing the bear market rebound that had many in the cryptocurrency sector baffled. Since its local low of $15,400, Bitcoin has increased by 50%. 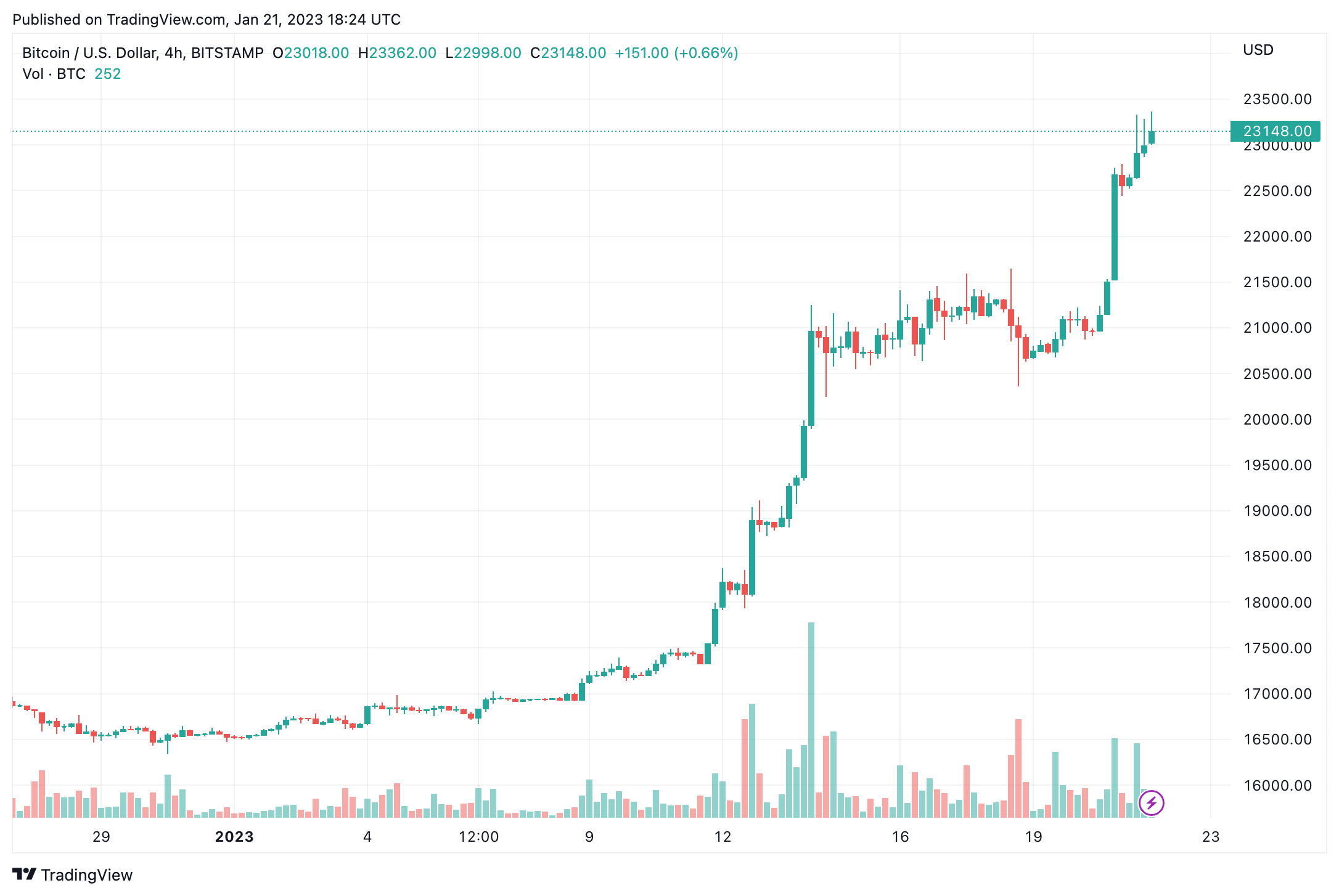 Outperforming other global assets, bitcoin has risen to the top among asset classes. Additionally, as inflation starts to decline, 2023 has experienced growth in various sectors. Since their November lows, gold and the S&P 500 have increased by 19% and 13%, respectively.

In the last day, markets have seen more than $387 million in cryptocurrency liquidations, with most of these transactions totaling $165 million in BTC and ETH.

Short holdings throughout this bear market rally have dominated liquidations. That does not mean that long holdings have been risk-free, though. Bulls have been taken off guard by regular retracements at significant resistance levels as Bitcoin continues to rise. For instance, BTC longs were liquidated for more than $30 million on January 18 and 21.

Many people on Crypto Twitter are confident that the current BTC increase is too rapid and will soon be reversed. But at least two trustworthy indicators show fantastic signs for bulls. In a recent investigation, Dan Lim, a premier on-chain data supplier, shows two indications trailing the Bitcoin price.

“Looking at the open interest and leverage ratio, they have fallen sharply since the FTX incident, and despite the recent strong rally in #Bitcoin, these two indicators still haven’t overheated at all.”
by @DanCoinInvestor

Both metrics are still very close to multi-month lows, even though the price has already fully recovered from the period of its fall brought on by the FTX/Alameda drama. First, it consists of aggregated open interest, the value of all open derivatives positions across trusted cryptocurrency trading platforms, expressed in U.S. dollars. The activity in the derivatives market is reflected in this measure. Mid-December marked the bottom for aggregate OI, and the rebound is still in its early stages.

Additionally, although hitting a low last week, the Estimated Leverage Ratio, a measure of the leverage rates derivatives traders select for their positions, has yet to return to the levels of December 2022.

The most intriguing developments for Bitcoin bulls in the medium term are, therefore, still to come, according to Lim: If Bitcoin has a significant decline in the future or reverts to its low point, it is imperative to have an active buying stance. The “Fear and Greed” score for Bitcoin (BTC) by Alternative increased above 50/100 (“Neutral”) for the first time since early April 2022.

On significant spot trading platforms, Bitcoin (BTC) momentarily soared above $23,330. As a result, it reached heights that hadn’t been reached since August 19, 2022, and it hit new five-month highs. Bitcoin (BTC) has increased by approximately 50% in less than two months.

It is still trading at a level that is 66% below the record high set on November 10, 2021. The cost of Bitcoin (BTC) increased by 8.8% over the previous day. According to estimates from Coinglass (formerly Bybt), $385 million worth of derivatives positions were liquidated, with “shorts” mostly to blame.

With this release, Cardano (ADA) could become 10 times more resource-efficient