Global markets were in risk-off mode, sending cryptos lower. The U.S. consumer price index (CPI), the most widely tracked benchmark for inflation, rose 8.6% on a year-over-year basis in May, topping expectations that it would decline to 8.2% from April’s 8.3%. That triggered a $500 price drop in BTC. At the time of writing, the Bitcoin price is changing hands at $29,248. 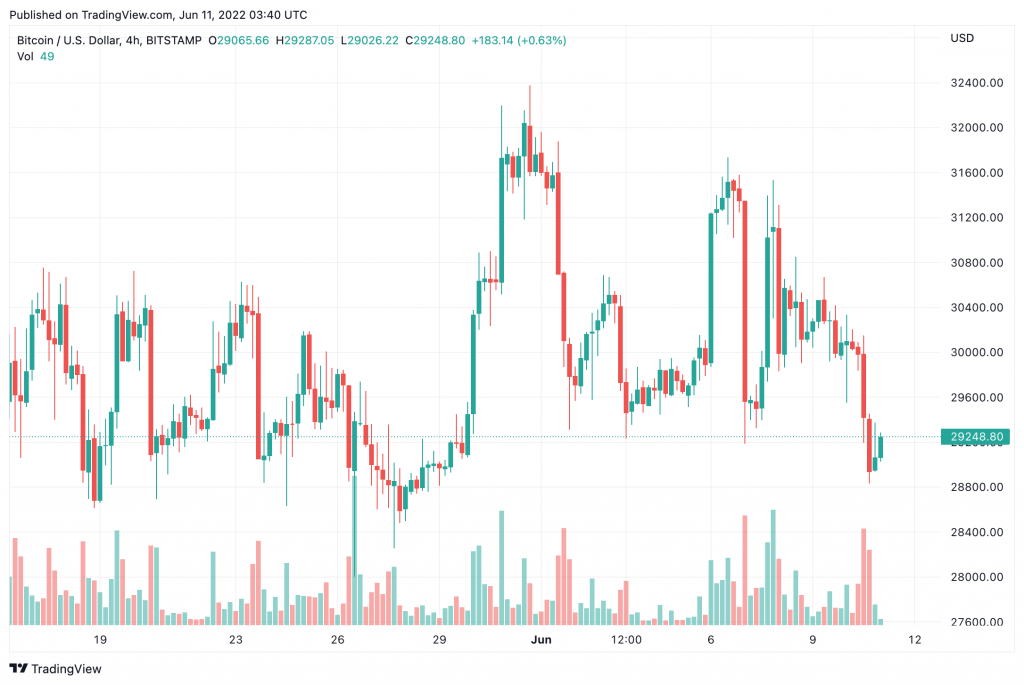 Typically, investors reduce their exposure to risk during times of rising inflation, which is not just a U.S. issue. The median global inflation rate is now 7.9% year over year, versus 3.05% last June, according to Deutsche Bank. “The shock value from U.S. inflation has lessened even if today’s print was pretty shocking in itself,” the bank wrote in a research note.

The Bitcoin Fear & Greed Index returned to “extreme fear” territory, reversing a slight uptick over the past few days. Bearish sentiment has been a persistent theme over the past few months, which has kept some crypto buyers on the sidelines.

For Bitcoin, risk now appears heightened of a retest of long-term support around $27,200, noting intermediate and long-term momentum gauges point to more downside. Bitcoin declined from the $33,000 resistance level last week, which indicates a loss of upside momentum. That lowers the chance of a prolonged relief rally.

BTC is roughly flat over the past week and has been confined to a choppy trading range. Initial support is seen at $25,000, which is near the May 12 price low. Momentum on the daily chart has weakened over the past few weeks, suggesting BTC’s downtrend from November of last year could continue over the short term. A downtrend is defined by lower price highs and lower price lows.

Secondary support is at the 200-week moving average, currently at $22,294. Still, a sharp price decline could eventually stabilize at $17,673, which is a 78% retracement of BTC’s prior uptrend from March 2020 to November 2021. The relative strength index (RSI) on the weekly chart is oversold, which means selling pressure could subside over the next few weeks.

Oversold readings do not indicate a definitive price low, however, especially within the context of a downtrend. Rather, adding a short-term momentum overlay to the 14-week RSI can help determine when oversold signals give way to a potential trend reversal, similar to what occurred in April 2020 and August of last year.

Ether (ETH) dropped 6% over the same period. Most altcoins, which are deemed to be riskier, underperformed Bitcoin. That suggests a lower appetite for risk among crypto traders.

The overall cryptocurrency market cap stands at $1.194 trillion, and Bitcoin’s dominance rate is 46.7%.

[Kyber Netwok] What Is A Decentralized Exchange (DEX)?