The prices of major cryptocurrencies such as Bitcoin price, Ethereum, Binance Coin, Dogecoin, Polkadot, … have increased slightly after falling deeply in yesterday’s trading session. However, in general, the market is still in the red and has not shown any significant recovering signal. 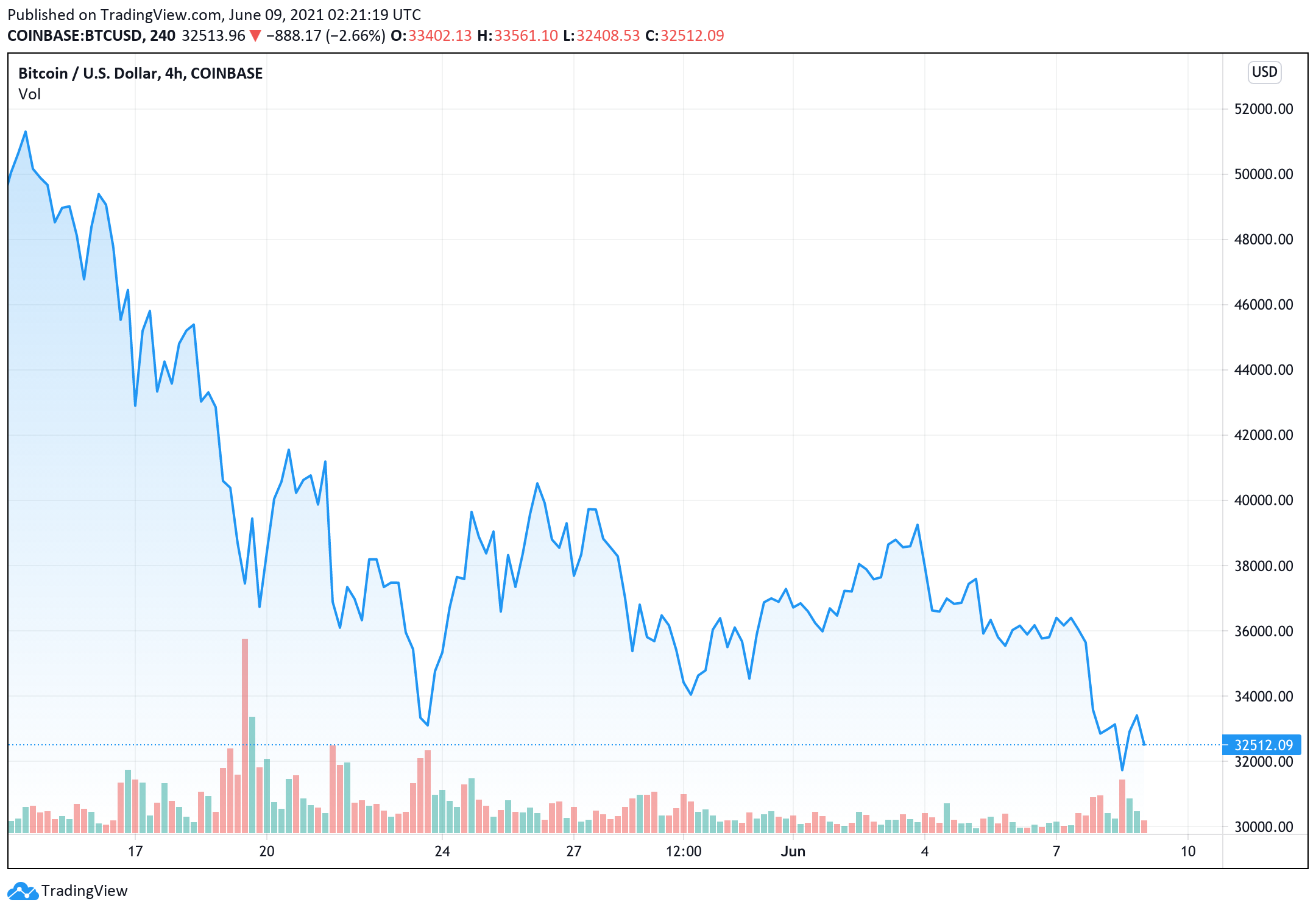 The drop in crypto market capitalization is being attributed to a major shift to bearish sentiment. Bitcoin volume and volatility are still lower than Ethereum but Ethereum-based opportunities keep analysts optimistic about the future. Bitcoin is above the 10-hour and 50-hour moving averages, a sideways signal for market analysts.

Regulatory concerns over cryptocurrencies in China are one of the reasons why many investors turn to Bitcoin. Some traders are also worried about the possibility of tighter monetary policy from the US Federal Reserve, which could put downward pressure on risk assets, including cryptocurrencies.

As the Bitcoin price has fallen over the past 24 hours, trading volume has increased, reaching $2.9 billion yesterday, the highest level since May 28. It seems that Bitcoin has found its footing since the crash oversold from a medium-term point of view in its long-term uptrend. As it stands, perhaps Bitcoin will establish a lower high than April without damaging the long-term uptrend.

So now, at the current price, BTC Miners are holding on for what? 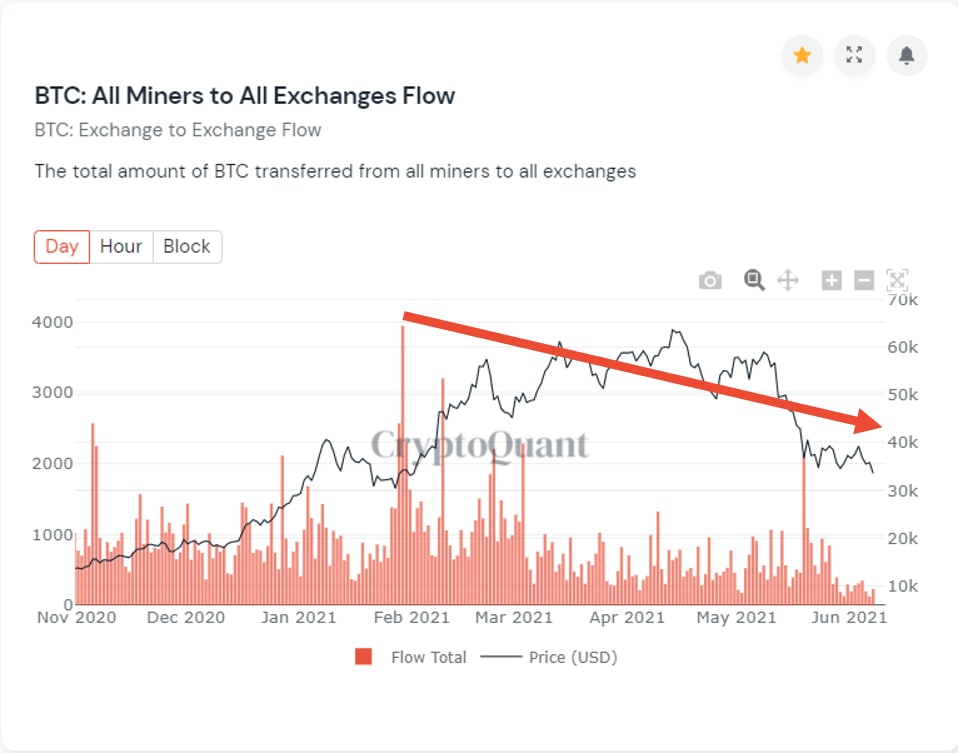 All miners to all exchanges flow show a decreasing trend | Source: CryptoQuant

The second-largest cryptocurrency by market capitalization, Ethereum, is trading around $2.502, down 8.2% from 24 hours ago. The asset is above the 10-hour and 50-hour moving averages, a constant signal to market technicians. Ethereum’s short-term momentum has improved with a rebound, but the medium-term momentum has deteriorated away, support the lower high from the May peak near $4.380.

At the moment, according to CryptoQuant, an unusual amount of ETH transferred onto spot exchanges. Big outflow prior, maybe it’s moved from one exchange to another. That could be Gemini/Kraken to Huobi/Bitfinex. They are likely to have better liquidity. 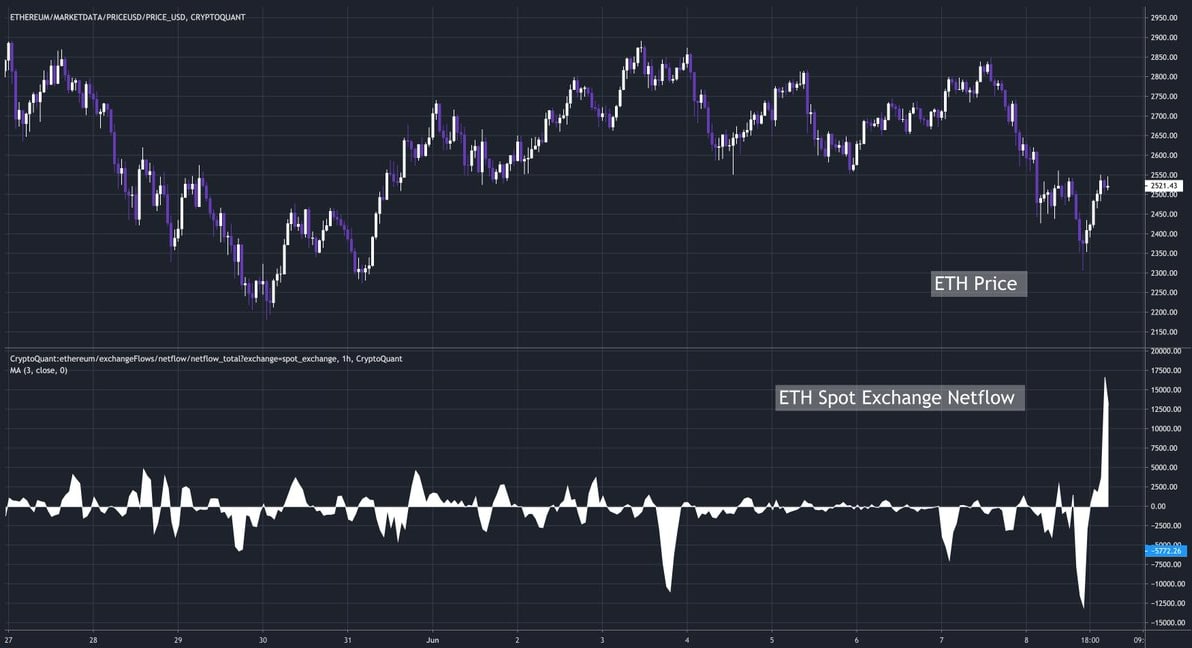 Ether’s momentum, in terms of volume, continues to beat Bitcoin. For 10 consecutive days, the amount of ETH traded has exceeded the volume of BTC. Analysts are starting to think this could be a long-term trend, especially considering how much higher Bitcoin volumes have been for most of the year.

It seems that Ethereum’s emergence in 2021 as an institutional asset is just beginning.