Bitcoin price and Ether fell amid a mixed performance from the rest of the tokens in the top 10 by market capitalization. At the time of writing, BTC is changing hands at $23,993.

Bitcoin Price and Ether Fall, but Meme Coins Are Rallying

Most major cryptos were on the defensive for a second consecutive day, with bitcoin and ether both trading slightly lower from respective two-plus-month highs they reached less than 48 hours ago. BTC was recently changing hands below $24,000 after cracking $25,000 on Sunday and down roughly a percentage point over the past 24 hours. Ether was trading under $1,900 less than two days after breaching $2,000 for the first time since late May, as investors large and small paused from more recent risk-embracing postures.

“Bitcoin is just under $24k at this time, & the amount of unique tokens being moved has slowed since the short-term uptick in June”, Santiment reported.

Especially, Bitcoin dipped 1.8% over the past 24 hours to trade at $23,884. Ether fell 1.4% to change hands at $1,878, according to data from CoinMarketCap. Bitcoin is still up 3.6% over the past week, while Ether has gained 11%. Over the past seven days, ETH has outperformed BTC amid growing anticipation of the Merge, which will shift the Ethereum protocol from proof-of-work to a faster, more energy efficient proof-of-stake protocol. ETH’s total market capitalization is now 50% of BTC’s, approaching levels last seen in January. ETH’s market cap compared to BTC’s indicates the potential for a “flippening” event, where ETH’s total market cap exceeds BTC’s. In a report, FSInsight suggested that ether could approach bitcoin’s market cap over the next 12 months.

Other cryptos were mixed, with popular meme coins DOGE and SHIB continuing their recent surge and rising more than 13% and 3%, respectively. But MANA, YGG, and SAND all recently fell more than 2.5%.  Futures tracking DOGE and SHIB recently had over $25 million in liquidations, data showed, suggesting part of the rally in them has stemmed from futures bets. But the two cryptos’ gains have also been confounding. Leading memecoin Dogecoin outpaced the rest on the list, continuing the recent price run-up that took it back into the top 10.

“Whale activity on altcoin networks is picking up steam in a hurry this week. By counting the amount of 100k+ valued transactions happening daily, we can see that HEX, DOGE, SAND, and CHZ have increased their large transaction frequencies”, Santiment added. 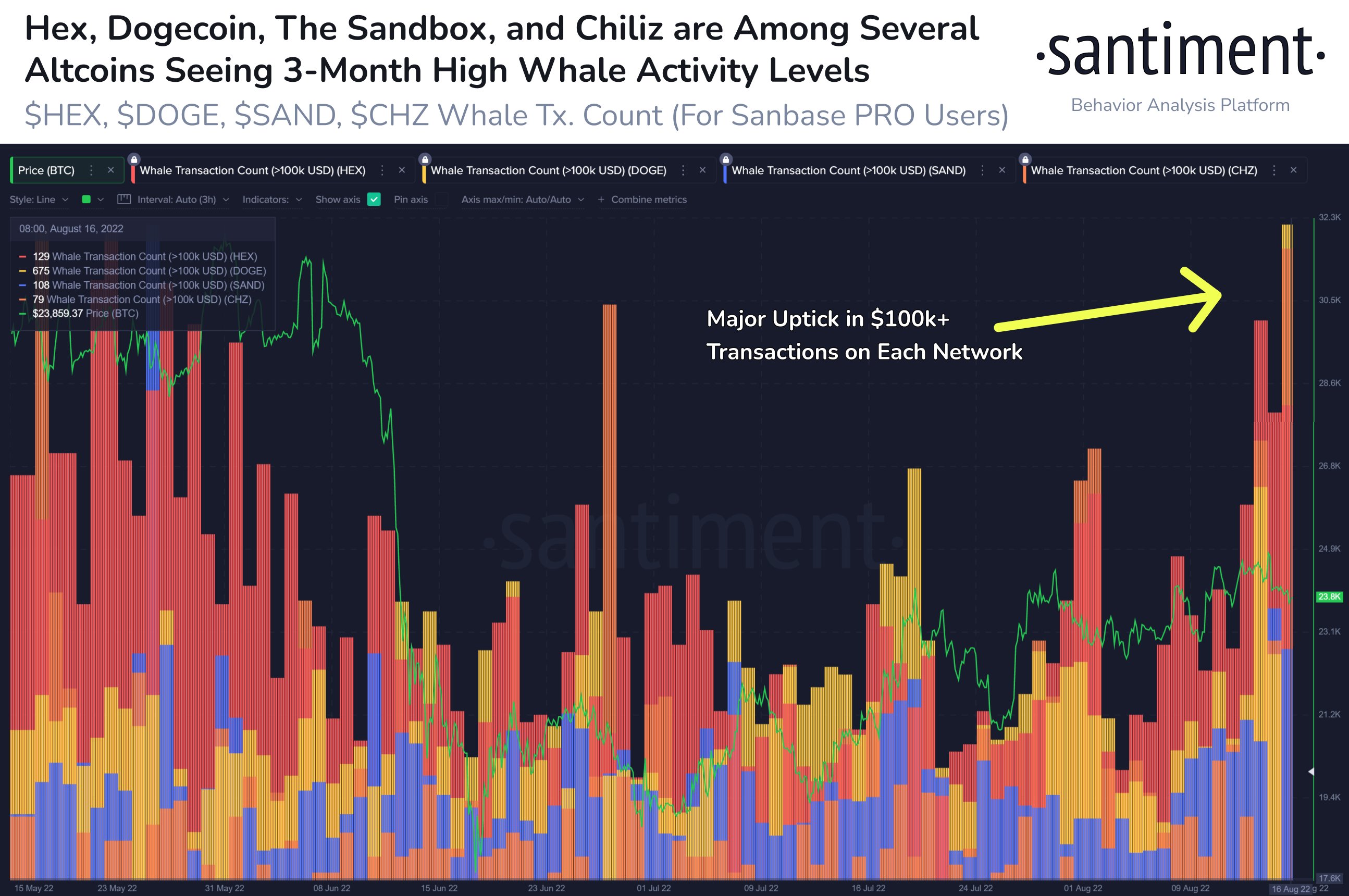 Investors await the U.S. Federal Open Market Committee minutes on Wednesday for insights into how the U.S. Federal Reserve views inflation, and likely interest rate moves at its next meeting in September. They are also eyeing developments in China as a slump in the real estate market and industrial output point to a worsening slowdown in the world’s second-biggest economy.