Bitcoin.org set to go through a major transition as controversial Co-owner announced preparing to step down

You probably already know the website Bitcoin.org – a website specializing in providing educational resources about Bitcoin, was founded in August 2009. Satoshi Nakamoto and network developer initially developed this site. Bitcoin Martti Malmi founded. However, this site has now been changed owners. 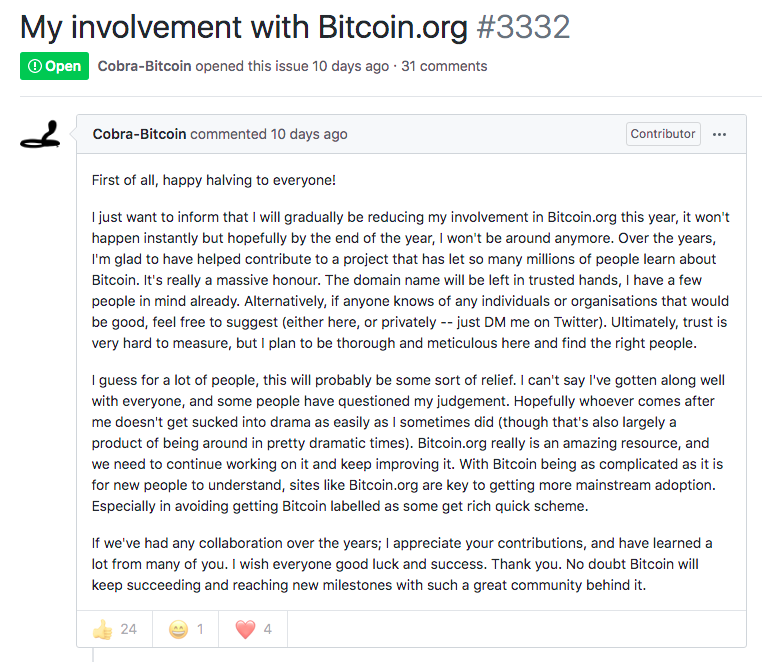 Bitcoin.org controversial Co-owner is cutting ties with the site

When Nakamoto left the Bitcoin project in 2011, he transferred control of the domain name to a group of impartial individuals, to protect it from falling into the wrong hands. For now, according to a post on Github by Cobra, the former owner of Bitcoin.org, control of the site will soon be transferred to a new person. Don’t be surprised, and there are no conspiracy theories. The reason is that Cobra plans to gradually reduce its involvement with the site until the end of this year.

“The domain name will be left in trusted hands, and I have a few people in mind already.”

Bitcoin is one of those things the oppressed and poor immediately understand, but most billionaires will not.

As such, Cobra has a plan to hand over domain control to the individual or organization it deems most reliable. Among them, several well-known celebrities have been proposed, including Will Binns and Saivann, two of the most active Bitcoin developers. They together contributed more than half of all non-merge commits to Bitcoin Core on Github. There are also co-founders Blockstream, Gregory Maxwell, and Craig Watkins, who maintain the current Bitcoin wallet site.

Since running Bitcoin.org, Cobra has been embroiled in many unwanted debates.

“The white paper is to blame for all of these dangerous beliefs – We seriously need to rewrite it, or produce a completely new white paper and call that the Bitcoin whitepaper.”

This has contributed to turning Cobra into an unpopular figure in the Bitcoin community. As such, many people will undoubtedly be happy to know they are coming down. But who will replace him better?

“I guess for a lot of people, and this will probably be some sort of relief. I can’t say I’ve gotten along well with everyone, and some people have questioned my judgment. Hopefully, whoever comes after me doesn’t get sucked into the drama as easily as I sometimes did (though that’s also largely a product of being around in pretty dramatic times).”