Bitcoin Options interest among Investors, the market has been heating up, but the most important thing is still Bitcoin scalability

Over the past few months, Bitcoin Options has become a craze in the cryptocurrency investment market. In December, Bakkt launched Bitcoin Option contracts, with CME following suit in January. Moreover, Deribit, the most popular unregulated exchange of options, introduced the Daily Bitcoin Options product at the beginning of the month.

Bitcoin Options have been all the rage

The interest in Bitcoin Options among investors, coupled with Bitcoin’s upward moves at the end of the year, has caused the cryptocurrency market to heat up. On February 14, the Open Interest on Deribit accounted for an average of over 80% of the BTC Options market, peaking at $ 855 million. However, the volatility drop is causing trouble. When prices were caught in a rut, the prominent positions on the exchange fell more than 16% compared to ATH, to $ 710 million.

On YTD’s time frame, the OI increased to 208%, showing good signs. However, the recent 16% decline and continues to be the severe second price decline in 2020. Trading on the exchange is quite crazy because there is a retreat after each move. This is something that is seen quite often since the beginning of the year when trading is intensifying.

Furthermore, the volume throughout the week has been free-falling, unlike the price that has dropped to $ 9,300 and is currently preparing for another revival above the $ 10,000 mark. On February 18, the BTC Option volume on Deribit reached $ 113 million, then dropped to $ 28 million, down 75%.

Based on the price of BTC Option, it is possible to measure the implied volatility of cryptocurrency assets and seem to be unstable. In the past week alone, the IV for three months has dropped from a high of 3.5%, during a $ 10,000 pullback, to 3.2%. Although the trend is short, it shows a bigger picture of Options traders’ expectations about Bitcoin price changes in the coming months.

In other happenings, it’s been more than a decade since Bitcoin was born, and the debate about its scalability is still ongoing. Aside from price movements in the trading market, one of the things we need to be most concerned about is, when Bitcoin sidechains can see significant acceptance and when scalability issues can be able to handle?

The scalability of the Bitcoin network is a relatively confusing issue

Jason Back, CEO of Blockstream, said:

“It’s difficult to make complex changes to Bitcoin’s base class. I have shifted my focus to making Bitcoin more modular so that Bitcoin can have different options like security. And that’s where The sidechain concept comes from.”

Sidechain is billed as a new architecture capable of solving Bitcoin’s scalability issues. Chainalysis’s data revealed that 90% of Bitcoin’s activity is related to exchanges.

Many solutions have been proposed to make transactions faster and cheaper while solving the scalability problem that annoys the Bitcoin network. Sidechain is one of them, one that user interaction moved out of the Blockchain, to the second layer, allowing several different Blockchains to run in parallel.

Bitcoin is sent to the seller’s service | Source: Chainalysis

The leading theory here is that most of the Bitcoin movement is taking place on exchanges, that is, going through regulated entities. Since both parties are trusted, making online transactions is not necessarily because this is an expensive issue. However, it seems that cryptocurrency exchanges are not afraid to pay high transaction fees like Lightning Network, nor Liquid, nor well-adopted as expected. Meanwhile, the adoption of Lightning Network has been delayed for a while, Liquid’s adoption increased significantly only in December 2019.

Bitcoin is locked in Lightning and Liquid | Source: LongHash

On a positive note, the DeFi Pulse chart recorded slow but steady, data on the total locked value in the Lightning Network. It has recently reached $ 9 million, an unprecedented level since September 2019. 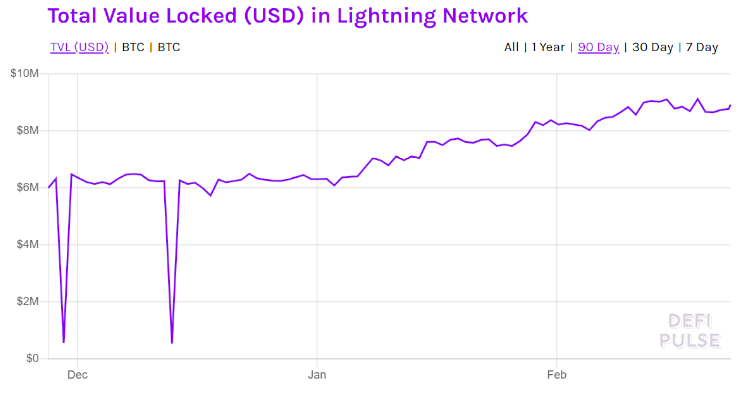 But, what is limiting sidechain adoption?

This may be due to some tradeoffs that sidechains come with.

“I think the reason that it would be desirable to have fungibility and privacy in the base layer is that we don’t have a way to provide a similar level of security to sidechains fully. so there is some kind of security trade-off internal sidechain today but might be fixable in the future.”

Many industry commentators have speculated that 2020 will be the year of Liquid sidechains, developed by blockchain technology firm Blockstream. Recently, Dubai-based cryptocurrency platform BTSE expressed its intention to use the Liquid Network Bitcoin sidechain created by Blockstream to raise $ 50 million.

Two huge Bitcoin short orders are waiting at $ 10,000 on BitMEX