Bitcoin holds the support above $60k while whales dumping – What’s next?

Bitcoin remains range-bound on Nov. 5 as fresh analysis showed that breaking $64,000 would help BTC climb to a new ATH. 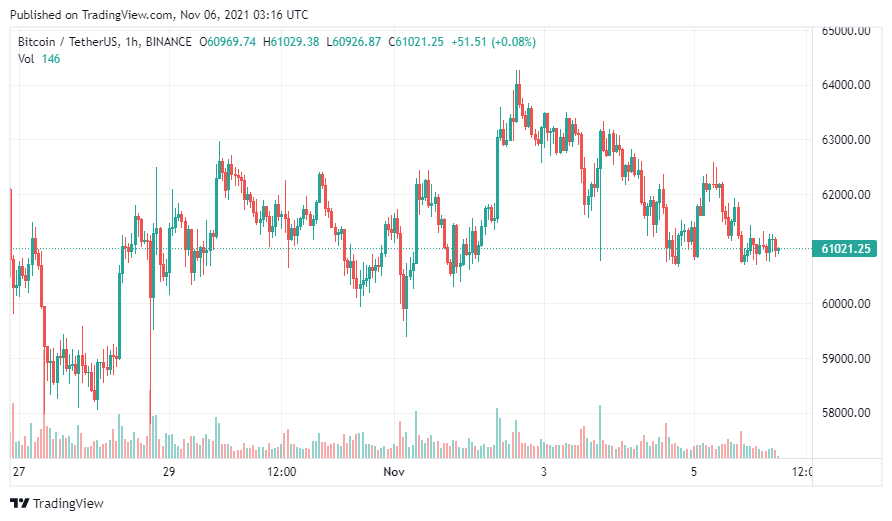 Bitcoin is still seeing a supply squeeze despite an increase in whale stocking on exchanges during the week, according to data from CryptoQuant.

A familiar but curious event – major hodlers are dumping BTC in the market, but at or near April all-time highs. Despite the argument that the bull cycle is far from over, whales are increasingly exiting their holdings.

The chart below shows the exchange rate of whales – top ten inflows to exchanges compared to overall inflows – showing a clear increase from mid-October onwards.

However, even though whales may be selling, overall, BTC balances on exchanges continue to decline.

The appetite among buyers is growing to meet the supply of sellers, and this explains the relative stability in BTC price action during the week, Ki argued.

“Bitcoin holds support above $60k in spite of whale dumping… Exchange reserve is decreasing, leading to less supply on exchanges.”

Figures from Coinglass show that Binance is an outlier to the November 5 trend, with its reserves increasing by 2,141 BTC in the 24 hours to press time.

After days of sideways moves, analysts remain largely focused on altcoins as many tokens continue to rally to new record highs.

However, for analyst Michaël van de Poppe, it will come as no surprise that BTC turns bullish. He argues that $64,000 will provide a springboard for the bulls if BTC/USD breaks through it convincingly. This level has been resistance throughout the week after several breakout attempts.

If successful, there will be little resistance for Bitcoin until $72,000 hits.

November has been predicted to be an extreme month – including a return to the mid-$50,000 region before ending up at a potential high of $98,000. However, for van de Poppe, this price now seems unlikely.

“I think it will be quite difficult to get there, and the cycle could take longer than the previous four-year halving cycles.”

Do Kwon has introduced his plan to revive the embattled…