According to statistics from Glassnode, the number of Bitcoin daily active addresses is increasing every day. Even the number of addresses generated per day is five times higher than that of Ethereum and 140 times that of XRP. 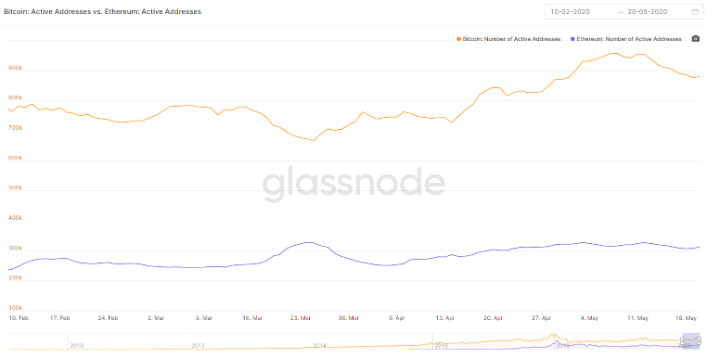 Bitcoin has nearly three times the daily active address compared to Ethereum, 11 times more than Litecoin, and 140 times more than XRP. In particular, the number of new Bitcoin addresses generated every day is nearly five times that of Ethereum. Bitcoin address just reached 470,000 in 24 hours. These are statistics the day after Bitcoin Halving takes place. This is in contrast to Ethereum, which only increased 90,000 new addresses daily. 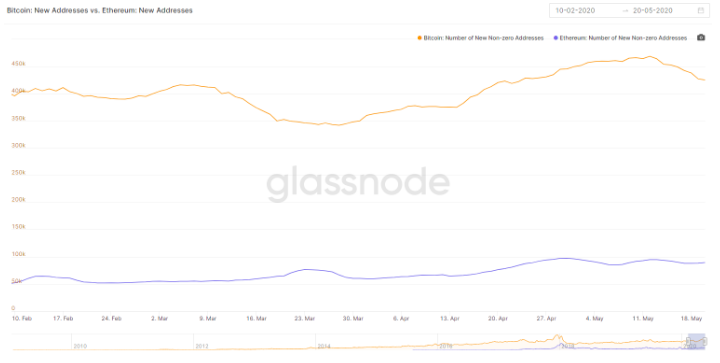 However, it is worth mentioning that the above figures do not prove anything. About 95% of all Bitcoin addresses exist – the equivalent of 626 million does not contain any BTC. After the price hike in 2017 and a sharp decline in 2018, millions of Bitcoin addresses were pulled back to zero on numerous occasions.

In contrast, the number of Ethereum addresses with positive balances continues to increase at a steady rate. Since February 2019, Ethereum has surpassed Bitcoin in terms of the number of active addresses that contain tokens and currently has more than 10 million compared to Bitcoin. The need to keep addresses with small amounts of Ethereum for gas may account for some of the difference.

Josh Lin, one of Ripple’s senior talent suppliers, believes that there is great uncertainty about how the XRP price will follow as the company’s efforts to grow the ecosystem continue. According to him, XRP is both a good and a bad investment.

Answering a question asked through Quora, Lin evaluated the potential of XRP as an investment. Lin said he was sure of the legitimacy that the Ripple team and the company brought to XRP, and said he wasn’t sure whether these moves would really affect the crypto markets.

“Yes and no. Let me explain. I’m confident in our team at Ripple, as well as the legitimacy the company is bringing to XRP. Ripple is driving more utility and volume to the XRP ecosystem, which in theory, should increase the intrinsic value of XRP. But whether the bid/ask price will reflect that… I have no idea.”

Lin is also unsure about the future of the regulatory environment surrounding XRP:

“There is still uncertainty of whether the SEC will rule XRP to be a security of Ripple (as of when I’m writing this anyway). Because the crypto sector is still nascent, there are a lot of regulatory uncertainties.”

Ripple is currently facing cases that illegally sell XRP and claim that it violates the US securities law. However, Ripple says that XRP is an independent asset and that investors cannot become securities because they are not shareholders in the company.

Bitcoin.org set to go through a major transition as controversial Co-owner announced preparing to step down