Bitcoin had a nearly 3,500% return on investment since 2015, 70 times higher of five traditional stock markets

According to Buyshares.co.uk, in the past five years, Bitcoin return on investment is 70.16 times higher than the average of the five significant indices from traditional stock markets. According to the data, the average ROI of the Financial Times Stock Exchange 100, NASDAQ, Nikkei, S&P 500, and Dow Jones markets was taken as research data of 49.27%. 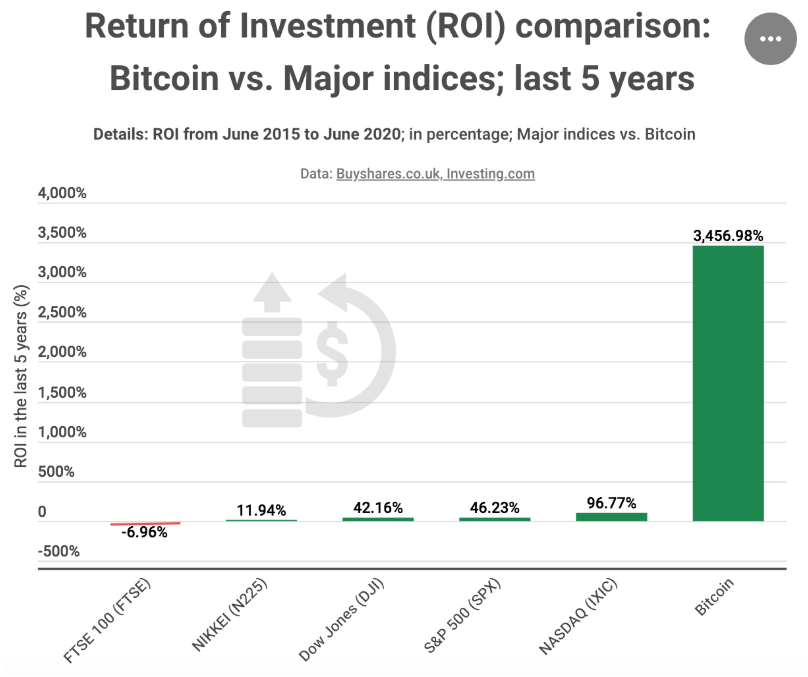 Buyshares.co.uk’s research also compared the Return of Investment between Bitcoin and the significant indices based on Year-to-Date statistics. Bitcoin had the highest ROI at 28.71%. NASDAQ had the second ROI of 8.74%, to emerge as the only index with a positive return between January 1 and June 26 this year.

Many factors contributed to the recent collapse of the leading indices offering Bitcoin a golden opportunity to thrive.

“With coronavirus pandemic that led to the traditional market crash, many view Bitcoin as an alternative store of wealth. Bitcoin fans consider the pandemic as the catalyst for elevating the cryptocurrency to the digital gold.”

The current collapse will allow investors to put money in stocks in the hope of reaping later.

What’s causing the small-cap altcoins to rally while Bitcoin continues to struggle under the same market conditions?